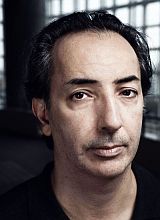 Pierluigi Billone is an Italian composer born in 1960 who lives in Vienna. He studied composition with Salvatore Sciarrino and Helmut Lachenmann as well as classical guitar and chamber music.  He has been a visiting professor of composition at the Kunstuniversität in Graz from 2006-2008 and since October 2010 is currently teaching there.  He is regularly invited as a lecturer at the IEMA-Ensemble Modern Academy, Conservatoire Paris, Conservatorium Amsterdam, University of Music and Dramatic Arts Vienna, Harvard University Boston and the Columbia University NY, holding composition seminars.  In 2010 he was a visiting composer at Darmstadt, where the  world prèmiere of his string quartet MURI IIIb with Arditti String Quartet was accompanied by a detailed analysis, which is a unique presence that always accompanies Billone’s compositions.  His ability to articulate the essence of the philosophical tension behind the work leads to numerous discussions, inevitably highlighting the artists desire to create a universe which transcends meaning, yet is not one without its subsequent subjective interpretation.  This is an inherent quality of new music, which grapples with multiple meanings and a delicate yet forceful bending of the will to allow interpreters less room to make error in understanding, and to convey as fully as possible the desired sound.

Among the prizes he has received for his works are the City of Stuttgart Composition Prize (1993), the Busoni Award for Composition from the Akademie der Künste Berlin (1996), the Vienna International Composition Prize (2004),  the Ernst Krenek Prize of the City of Vienna (2006), and the Grant in aid Ernst-von-Siemens-Musikstiftung Munich (2010).  He has received numerous scholarships including the Schloss Solitude Summer Academy, Heinrich Strobel Foundation, Hamburg State Opera, Akademie der Künste Berlin, and Kunststiftung Baden/Wurttemberg- Stuttgart.   He has won composition awards from the City of Stuttgart, Akademie der Künste Berlin, Office of the Government of Vienna and City of Vienna.  His music has been performed by Klangforum Wien, the Ensemble intercontemporain, the Ensemble Modern, the ensemble recherche, L’Instant Donné, and the Ensemble Contrechamps and has been featured at festivals such as the Donaueschinger Musiktagen, Wien Modern, the Wittener Tagen für neue Kammermusik, Ars Musica Bruxelles, und the Festival d’Automne à Paris. Numerous radio broadcasts (BBC, WDR, SDR, BRD, NDR, ORF, DRS, RCE, RF) have assured Billone’s music is heard often and interpreted with enthusiasm.  His music has appeared on the Kairos, Stradivarius, Col-legno and Durian, EMSA and Ein_Klang record labels.

He has developed repertoire in close collaboration with performers and conductors, and awards a meticulous presence of language, articulation in a sonic spectrum at the highest of levels.  He has developed innovative techniques and vivid sound colours by working in close collaboration with solo artists of the highest calibre in new music.  Amongst these, are the conductor Emilio Pomárico, the percussionists Christian Dierstein and Adam Weisman, the bassoonist Lorelei Dowling, the violist Barbara Maurer, the clarinet duo Stump-Linshalm, and the singers Frank Wörner and Alda Caiello, for whom he has written solo works and solo parts.

His compositions are thorough and meticulous, offering worlds within worlds, almost like discoveries of archaeological artefacts.  For instance his piece, Bocca.Kosmoi (2007) for voice, trombone and orchestra premiered by the Radio Symphony Orchestra in Vienna has an essence of fossilised time, a universe in another dimension which juxtaposes an ancient spirit, over many years  that strikingly seems to suspend its linearity, and attempts to achieve in a given second what could have emerged over hundreds of years.  In this sense it offers  a surreal and purposefully sculpted sound world, shying away from electronics and desperate to communicate through the natural resonances that wood, brass of instruments today still offer, if allowed to tap into their ingenious ways.

“…his radical methods have led him to explore unchartered sound worlds and to develop idiosyncratic instrumental and vocal techniques. Nevertheless, the concurrent roots of these sources of inspirations lie in an archaic world – a sacred universe – where, as if for him, the most progressive standpoint of modernity would be when music itself reaches its own phenomenal essence.”  – Philippe Albéra