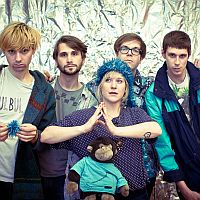 Think all together, what can be ruled out: This question sets apart every unctuous band aspiring for the rise to the top. It is often overlooked that the idea “anything goes” is already a commonplace contemporary musical practice, therefore any band who wants to set themself apart, and not be pigeonholed, actually heaves themselves into the most spacious pigeonhole of all. How refreshing then that the band Sex Jams sees nothing defamatory in a noble reservation to brand themselves with something meaningful, without cutting the umbilical cord to their creative force and free-spirit. Noise Pop is a genre that reminds us of the 1980s and early 90s, and the taste stays fresh thanks to the Sex Jams’ branding applied to it.

In 2008 Sex Jams rose from the ashes in two ways: firstly from the last embers of the fire which was the Post-Punk and No-Wave movements, bringing with it legendary stars like Sonic Youth or Big Black who continue to inspire bands of today. These two musical movements breached the history of Rock music, in both its symbols and its pop-mythological status: The ideals of Rock ‘n Roll as a vehicle for fame, sex and revolution was on the way out and becoming obsolete. The next generation of rock musicians wanted to break free of this out-dated tradition and their implications and found their place more within the art world and the break with traditional song structures and the dissolvent of heretofore accepted boundaries of dissonance. Secondly, on a personal level, Sex Jams rose out of the dust and splinters of different projects, although they were already connected through their involvement within a related musical scene. All four members, Katarina Trenk, Florian Seyser, Rudi Braitenthaller and Lukas Bauer all came from the Hardcore scene and carried with them the bold DIY attitude into their music.

Influenced by both Pop and Noise, the debut album released in 2010,“ Post Teenage Shine” (Siluh / Noise Appeal) brings with it things that seldomly done so well together; Melodicism and dissonance, harmony and white noise, pop appeal and rowdy chaos. Wonderfully diffused guitar riffs sweep throughout, the threads of which could be taken by the young and revitalized shoe gazing gods from My Funny Valentine. The vocal work ranges between spun honey and bitter withdrawal, a commonly accepted practice which works so well here thanks to its skillful use.

Next to diverse side projects and shortly lived collaborations, Wolfgang Möstl(Killed By 9V Batteries, Mile Me Deaf)  has found time to be a permanent fixture involved with the band. The veteran arranger brings with him on the newly released “Trouble Honey” (2013, Siluh / Noise Appeal) greater songwriting quality and melodic handiwork to the now five-piece band. The euphoric rock-riot against the common flight towards the center is already found on this first go for the quintet. Overall the further eradication of superficial pop elements brings with it a more balanced and easy relationship between desperation and élan vital. It is also interesting to note that the many Indie references from their formative period have become even more apparent. The Sex Jams go back to a time before the travesty of Emo and its self-facing pornographic sensitivities, before the pathos of diverse Punkers and the bickering Rockers, and insert an immensely important agent of the classical anti-Pop behind the unending outgrowths of the here and now.

The question remains of the prevailing attitude. Is the current generation still in the fight against the macho and pompous phantasy makers, in a traditional rock rebellion? Just under different conditions perhaps? How does man experience this musical contempt today? The unfulfilled boredom which bands like Sonic Youth embodied in both music and appearance is merely a brushstroke in the diction and gestures of the Sex Jams overall picture. Their songs tell of the freedom of playful forces, which were and still are a main factor of the Postmodern. If their music reflects the sickness of consumerism or ostentatiousness, than only imperceptibly, or with a sly wink of the eye. In general they balance seriousness with a certain carelessness and humor, and to cloak their music in a cultural based ideological guise would most certainly be a doubtful practice.