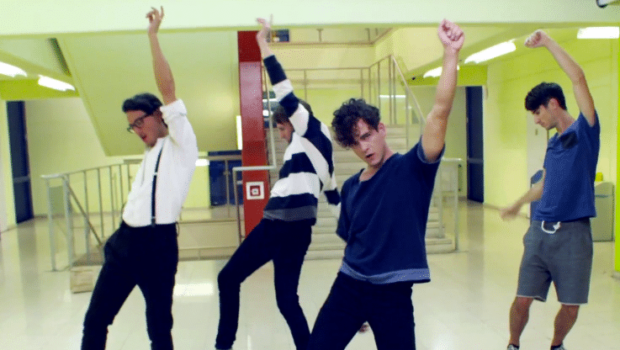 In Austria it is no secret that the band GIN GA creates great music and writes excellent songs, and now more and more people are discovering this beyond national borders. Traded a few years ago as one of the big hopes of the local pop scene, the foursome is now on the verge of making quite a name for itself in Europe. In the last few months, it is especially the song “Dancer” of the new EP “The Nights” (monkey. music) that has become a celebrated hit around Europe. In Poland the EP is currently ranked at number 57 in the i-Tunes alternative charts, with the track being played on heavy rotation by many prominent radio stations. The band is surely also pleased about a lot of airplay and an ever growing fan base in Spain, France, Ireland, Lithuania, Norway, Switzerland, Germany and the UK.

A memorable performance at the Popfest Wien 2011, numerous sensational gigs abroad, including the United States, and the first-class and highly praised debut album “They Should Have Told Us” have fueled the hopes that GIN GA could actually be the next big successful Austrian pop export on an international level. Currently celebrating one success after the other with their new EP “The Nights”, the signs for a breakthrough are positive. This does not really come as a surprise to music scene experts, since Alex Konrad (vocals, guitar), Emanuel Donner (violin, vocals), Klemens Wihlidal (guitar, synthesizer) and Matthias Loitsch (drums, percussion) have convinced fans and critics from the very beginning.

After the first rush of the debut album it became a bit quiet around the band, but only because the four musicians have devoted themselves even more to their songwriting than before. Listening to the tracks of the new EP, this has been a commitment that has clearly paid off. Relying on their exceptional songwriting skills, the frontman Alex Konrad and his colleagues have once again managed to create masterful indie pop gems, which do not subdue to current mainstream trends, but yet hit the taste of time.

In comparison to the first album, the difference from the old pieces is perhaps the fact that everything seems a little more sophisticated, thoughtful and mature. There are rumors that GIN GA knowingly did not want to just return for a quick taste of success, but instead report back with a lot of style and quality.
Michael Ternai
(translated from German)