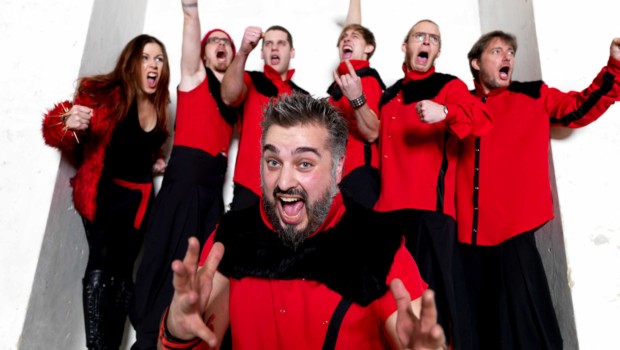 Band Portrait:
When the Russians come to Austria, it usually means wild parties ’til you drop and you may expect to see one or the other vodka glass flying through the air. Russkaja is the best example that there is a spark of truth to this cliche. Granted, amongst the 7-headed band there is only one real Russian, namely singer Georgij Makazaria. This however does not detract from the hustle and bustle of the musicians, since hot Balkan blood simmers in all of the band members. In Austria, Russkaja already has no need for further introduction, since they are well known by pretty much every single Austrian TV viewer as court musicians of the Austrian late-night show  „Willkommen Österreich“ (in English: “Welcome Austria”). In addition, there is hardly a spot left in the Alpine country where the band has not yet performed.

Always on the go – these are exactly the words that best describe Russkaja. No other Austrian band performs as many concerts as this septet, which has already enthused large masses at huge festivals such as the famous German metal festival Wacken Open Air. Live performances seem to be their passion, so it comes as no surprise that they have only released three albums up to this day. With their stylistic mix of ska and power polka, it definitely makes more sense to rock the stage than to vegetate in the studio. Ultimately, the audience wants to be entertained. The stage berserkers have been serving musical indulgence since 2005. It was the former Stahlhammer-singer Georgij who started the band Russkaja, which name is composed of the words Russia, ska and an affirming “ja” (yes in German). With a positive and energetic attitude, the group has ever since performed gigs around the world and has enthralled audiences between the Netherlands and the Bosphorus, which are just as diverse as their music. The vivid Russkaja sound lies somewhere between world jazz pop, funk, and high-speed brass, and can be understood as a postmodern version of Balkan folk music. The lyrics are sometimes in English, sometimes in German, but mostly in Russian, which however does not keep the audience from conjointly bawling and bouncing to Russkaja’s sound.

A year after its founding, the band signed with the independent label Chat Chapeau, which specializes in world music. After the release of the EP “Dawai, Dawai” in the same year, it took two years until they released their debut album “Kasatchok Superstar”. The full-blooded musicians put a lot of heart into the album. Besides front man and singer Georgij Makazaria, the members of Russkaja are Antonia Georgiew (violin), Zebo Adam (guitar), Titus Vado (Schalgzeug), Dimitri Miller (bass), Manfred Franzmeier (saxophone, clarinet), and Hans Georg Gutternigg, who plays a most extraordinary instrument, namely the potete (mix of trombone and trumpet). Some of the band members were active in Austrian formations such as Drahdiwaberl, Hallucination Company, or Hot Pants Road Club, or have a classical background, such as Antonia, the only female in the male-dominated septet, who already won many awards at a young age. 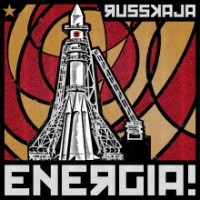 The sequel “Russian Voodoo” was released in 2010 on Geco Tonwaren, an alternative label of Hoanzl. The most recent record “Energia!” was released in April this year by Napalm Records. Of course a new album also implies an extensive tour and so Russkaja are once again touring the globe and conquering the stages with their contagious and addictive music. It is safe to say that Russkaja is definitely the most fun group since the 80s hits of Dschingis Khan. Note for the personal bucket list: everyone should at least once see and experience a live performance by Russkaja and feel the energy!
Bibiane Weinberger
(translated from German)