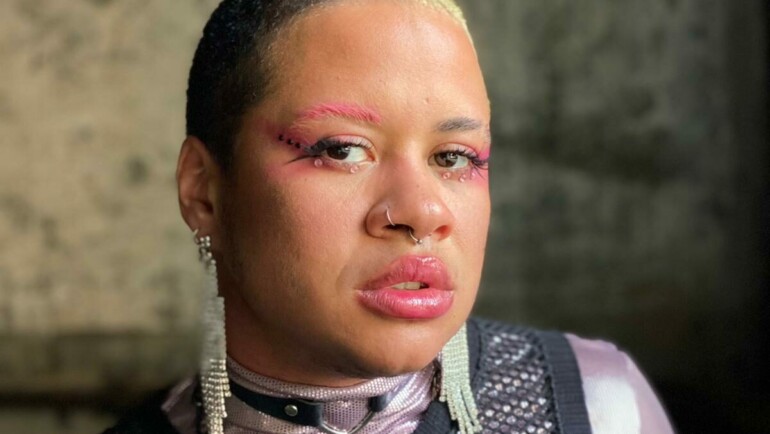 As one half of the duo Salty Fries, part-time band member of well-known Austrian band AT PAVILLION, occasionally support band member to Kerosin95 and solo artist under the name, SHELZ, Luí is no newbie to the Austrian music scene. Over the last few years however, their music is inextricably and explicitly linked to their life experiences and they actively and bravely speak out on being neurodivergent whilst navigating the music world.

Note: This article contains references to suicide which some may find triggering.

Way back in 2012, Luí formed part of the band Polo to the Masses who then described their sound as “danceable Indie Rock”. Even though the band went separate ways, it was still a formative time for Luí who found their own voice and understanding of the plight of forging a career as a Black (gender)queer artist. It was both a hard pill to swallow and a pivotal moment of self discovery.

“I lost my passion for music after that”, Luí remarks. “That”, being when they as an up-and-coming musician had to discover their own identity, firstly by being observed by a predominantly white gaze. This “that” was where reactionary concepts of gender binaries and phenotypes presented both a physical and mental challenge for how Luí was perceived and violently clashed with how they wanted to be perceived by, not only their audiences, but also the allegedly ‘safer’ space with their band members, too.

On top of “that”, the pressure to be successful by following the paths of the regular musician in the industry became all too much: create, rehearse, perform, yes, but also monetise, advertise, (self) promote. This was not the musical journey Luí had imagined for themselves, although it is normalised as a necessity to succeed in a fast-paced industry where visibility and consistency are huge components and an even bigger pressure.

Luí picked up a guitar at the age of 9 in Brazil, where they were born, and they haven’t put it down since – even after moving all the way to Vienna to start a new life here. From acoustic guitar, self-taught, they also turned to electric guitar and then bass.

Yet, for a long time, their Brazilian roots were not something they felt comfortable to explore in their music early on. Then it was more important to blend in – to not be labelled as different because of their background. This denial of the self for the comfort of others is something they have since revisited and explored. Luí has been therefore decidedly connecting to traditional bossa nova chord progressions, fusing with new soul bossa nova in the last few months specifically. They have written their first song with Portuguese lyrics which is still unreleased – and rightly so since it is a personal, intimate exercise at the moment. For Luí this process is connecting them to their inner child and dealing with past trauma.

As far as they see it, music is an innate power and passion they possess which fuels their existence and makes it make sense as they want it to, for them. Music is for Luí a medium which since the age of 9 they have used to, as they describe, express their ‘feelings and fantasies’. It is their space and a safer one than the immediate environment around them which they are often made to feel at odds with. No wonder then that music also became a solace to them during crucial points in their life.

Fast forward to 2018 where their lyrics became intentionally vocal on their personal experiences:

I don’t believe in your assignments at birth

Your system is falling apart

It doesn’t work out

When people think they’re in control

You get so stressed out

Oh it is tragic

It’s all just made up

The lyrics to Luí’s debut solo EP “I’m Fine” and its single “Fluid” revealed an artist tired of labels and tired of labelling. On their Bandcamp page a text from them about the 2018 project reads: “I sat in my room for a few months and wrote & recorded everything by myself. It was so different from my experiences with my Band, but it was very freeing. It is a very personal EP with songs reflecting on my mental health, my gender and my identity”.

Here was now an artist who had grown and learned so much about themselves and who now owned their unique approach to their music with a certain strength as well as a constructive, justified, beautiful anger.

But this came at a cost. Luí still struggled with reactions to what music they put out given that their personal life was so present and so rawly part of it. They realised back then the importance for them of political messages in their music but were terrified about the reactions and being read only for that or being sidelined for that kind of focus. They battled then with thoughts of suicide as a result.

To get to the point of releasing music again then took a lot of personal and inward work, strength and self belief. And for them, music was also a key part of that self development.

Nowadays, Luí’s main source of music production and sharing is via their instagram page which serves a combination of their musical projects as well as saved highlights and stories offering support and advice through most importantly, transparency about their own experiences with mental health as a musician but also as a human being. Music is a must, as Luí sees it, and is a coping mechanism as well as a sweet catharsis.

This online offering flows naturally into their AFK  (away from keyboard) presence; we follow Luí on train journeys to gigs across the country, backstage, on stage, after shows as they document their everyday life with music. They are doing the work of talking about mental health, they are showing their fears, feelings, moments of joy, moments of self doubt. They are showing themselves truthfully and this is what makes their presence so important and powerful online.

This is as much a practice for themselves as it is to encourage others to normalise conversations and acknowledgement of mental health in the creative industry. In Luí’s own words: it is possible to feel isolated in so-called ‘safe spaces’ and therefore social media is their way of connecting to others and showing they are not alone.

Luí has created and flourished in spaces where they can be offline too. Their most recent constellation in Salty Fries and all of their works with other bands and musicians are intended to work within spaces where they can be all of their expression and not only the parts that are digestible or palatable, for anyone. ‘With Salty Fries we cancel if we are too exhausted’ they go on to explain that we have to accept we operate for the most part, even when we try to avoid it, within a capitalist system and sometimes it is really too much. And that’s ok.

Luí describes and works with their neurodivergence in a way that they have a unique relationship and approach to music. They use their moods and ‘vibes’, in their words, to understand music. They describe it as a superpower: an innate skill to perform and create with others by feeling energies. This is a side of mental health not talked about enough or given adequate air time. Rather than seeing it as a stigma, Luí’s perspective on their musical power is a refreshing look into all of the increased awareness and sensitivity neurodivergence brings.

Luí spoke freely about what bookers, producers, tour managers and everyone who is involved with the process of music/performance production can do to make space for neurodiversity. One of those things was not equating neurodivergence with, to use a loaded term, “ability” or rather professionalism. In order to be truly inclusive, curators, programmers and technicians, amongst many others, have to also consider the diversity of musicians and performers beyond a superficial level.

Until then, as Luí puts it, their ways of thinking and understanding music are not a hindrance but a gift.

Thank you for sharing that gift with us, Luí.