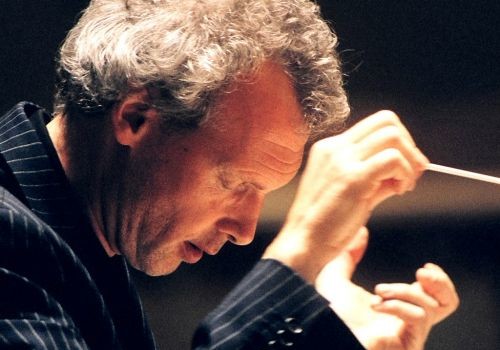 Christian Muthspiel is an artist of many faces. The gifted musician and composer easily copes with different stylistic contexts and is also truely skilled in the fine arts. Christian Muthspiel is without a doubt one of those musicians who can hardly be pigeon-holed.  The composer, conductor, trombonist and pianist has never surrendered to any conventions whatsoever and has never restricted himself to just one matter. The Styrian born and mutiple award winning artist feels at home in a variety of musical contexts and environments. In the many forms of jazz, as well as in world music, improvisation, classical and contemporary music.

This openness in all directions has also helped him in becoming one of the most popular representatives of the local music scene. Numerous commissions from renowned national and international orchestras, ensembles and soloists attest to the genius of his style crossing and innovative work. Probing the limits again and again, Christian Muthspiel, who has now also found a further field of activity in painting, tries to impose every project with his own distinctive and highly individual stamp. One of the most recent projects is the formation “Christian Muthspiel’s Yodel Group”, which Christian Muthspiel founded in 2009.

Together with Gerald Preinfalk (saxophone, clarinet), Matthieu Michel (trumpet, flugelhorn), Franck Tortiller (vibraphone), Robert Riegler (bass) and Bobby Previte (drums), the Styrian embarks on a musical journey that leads him and his colleagues close to folk music. It is specifically the yodeling, a wordless singing form entrenched in the cultural traditions of the Alps, which is brought into a new musical context. For Christian Muthspiel “yodeling is the Blues of the Alps” and its original character has little to do with the overused chlices which are often attributed in movies and television.

Christian Muthspiel, who grew up with yodeling, makes the attempt to pull this singing form away from all the kitsch and to settle it in a completely new musical environment. Those who know the Styrian also know that this happens is a very elaborate and often very unpredictable way. As a music creator, Christian Muthspiel has never been long held up with concepts. With the previously mentioned five instrumentalists, he gathers genuine free-thinkers around him who share his musical vision and create incredibly complex sounds with elements of jazz, improvisation and folk music, while liberating themselves from any style limitations. The result is a sonic world that unites regional and international sounds in a wonderful manner.

In general, Christian Muthspiel’s concerts offer a great opportunity to approach the multifaceted work of this extraordinary artist from different sides. His work reveals the many roles that he has played for many years and gives the listener an insight of his visionary thinking and the creative potential that goes far beyond the norm.
Michael Ternai
(translated from German)