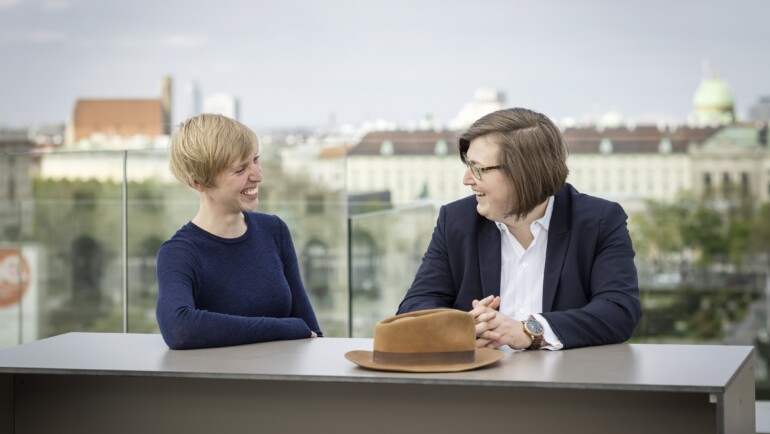 With CIVIC OPERA CREATIONS (COCREATIONS), the two producers CARMEN C. KRUSE and LEONORA SCHEIB develop new opera works and pieces for musical theatre with long-term critical exchange processes. The project is shaped by recurrent conversation formats and an honest interest in the participant’s concerns. The two are graduates of the “Beth Morrison Projects Producer Academy” and have several strings to their bows: in March they gave an insight into the three pieces they are currently producing through their event “Creations*3” in the SARGFABRIK. With “Civic Newsroom” they shortened the production phase to only three days and put to the test what forces can be released by opera teams in such a short time. In “VR-BANIA” the search for a common culinary identity is once again at the centre. The piece, which will utilize new technologies, will conclude with a shared meal on a long banquet table. CARMEN KRUSE and LEONORA SCHEIB spoke with Ruth Ranacher about sources of inspiration, multifaceted approaches, and openness as a gift.

Civic Opera Creations has the word “civic” in it. This indicates that you choose themes that run through the entire cross-section of the population. What exactly does “civic” signify for you?

Carmen C. Kruse: Civic Opera Creations originally comes from “civic impact”. We use the means of opera to build bridges between different perspectives and points of view that have previously found little space within the medium of opera. The exchange with different communities is quite central to our work – it runs through the entire process, from the development of a theme all the way to the performance, because that is also a place where experiences are exchanged.

“The personal meets the social here.”

So, you use opera as a place of encounter?

Leonora Scheib: We understand opera as an opportunity for repeated encounters and mutual inspiration. The works are not produced in a vacuum but are influenced by lived individual experiences. When people repeatedly interact with us during the development process of a piece, a very different, intense relationship with the works themselves emerges. The theme of each piece influences who we enter into an exchange with. “Now that we are Persons” by Caitlin Smith, which we presented at “Creations*3” in March, brings together people who are involved in visual art as amateurs. In Manuel Zwerger’s “Great Open Eyes”, the personal experience of child loss formed the common ground.

Carmen C. Kruse: “The End of the World”, the third piece of the evening, deals with the personal experiences of women concerning the “end of the world”. Here we spoke to a diverse group who described very concrete experiences to us. The personal meets the social here.

Leonora Scheib: We also asked the concrete question, “Have I experienced a personal end of the world?” This made people feel directly addressed and eager to enter into dialogue.

Carmen C. Kruse: A broad spectrum of personal, professional, and social experiences were described to us – similar, yet at the same time very distant and universal.

I assume this part of the work takes the form of workshops.

Carmen C. Kruse: We work with a larger structure here; the workshops mainly concern the artistic teams. There is always a week scheduled for the interview phase, during which we interview people in different formats – that can be in a coffee house or at their home, at a writing- or a painting workshop – or on request, because they have responded to a call.

Could you explain this in a little more detail using “Creations*3” as an example, an evening where scene insights were shown from three current productions? At what stage are these productions at the moment? How did the evening go?

Carmen C. Kruse: “Now that we are persons” by Caitlin Smith, “Great Open Eyes” by Manuel Zwerger and “The End of the World” by Patricia Martínez are all at different stages in their development. In the case of “Great Open Eyes,” the most recent piece, it was a draft that we’ll continue to develop. We held the interview phases in Vienna and Münster and spoke with a total of about fifty people who have experienced child loss. With this input and emanating from the special stage situation, we wanted to try out certain things and show them in front of an audience – musical motifs, the use of instrumentation and also text excerpts. In the case of “The End of the World” by Patricia Martínez, we used the week to finalize a version with librettist Giuliana Kiersz that will premiere in September 2022. The interview process is already complete here.

“It’s interesting to see what women have experienced that is not transferable to men’s experiences, and is now given space here.”

Does the interview process mean you’re having conversations with diverse communities?

Carmen C. Kruse: Exactly! In Vienna, for example, we had a partnership with Frauenhetz and were able to interview women between the ages of 6 and 82 about what ends of the world they had personally experienced. To accompany this, we organized writing workshops and individual interviews. It is interesting to see what women have experienced that is not transferable to men’s experiences and is now given space here. Going forward, these experiences inform the fictional characters and their life situations. We have defined the spectrum of what we want to show in this first version and have thought very carefully about which world endings we chose. Composer Patricia Martínez had already written two six-minute motifs for the apocalyptic end of the world, which we performed that evening. Shortly afterwards, she finished work on the libretto. Now she is working on a more musical version, which we’ll record with the SWR Experimentalstudio.

Leonora Scheib: Caitlin Smith already had a relatively large amount of compositional material ready for “Now that we are Persons”. Our goal was to give the piece a go with Caitlin’s existing 10-channel sound installation and then be able to offer her an orientation for the further compositional process. In parallel, we worked with the amateur visual artists to fine-tune how the piece could proceed in terms of content. After the evening, which they attended in the audience, we again sought feedback from them about the composition. It was great to experience these immediate impressions and to be able to take them back into the ongoing creative process.

Such moments are usually rare in the regular opera business.

Leonora Scheib: Building this structure is very important to our creative process. We want to create a context that enables you to try things out – this helps the quality of the pieces a lot.

Carmen C. Kruse: A city or state theatre usually can’t offer this framework on its own because of its repertoire, so we complement each other well here and build individual structures for the plays, houses, and locations.

That’s a good point. Leonora, you published a study in 2019 that examines the repertoires of European opera houses regarding the ratio between contemporary works and their usual program.

Leonora Scheib: More specifically, it examines the disposition of contemporary music theatre in European opera houses. As far as I’m concerned, this study certainly informed and inspired the conception of COCREATIONS. In the many conversations I was able to have with artistic directors, several points crystallized. One was that during the stress of production there is very rarely enough time for long-term development processes or enough know-how in how to deal with contemporary compositions. Another point concerned the choice of theme. That instead of another “Hamlet”, one deals with what the people are interested in at the moment. The third point is the longevity of pieces. World premieres are very expensive, but they are seldom performed a second, or third time because each realization incurs costs again. Co-productions can prolong the life of a new play and extend its reach. That’s what attracted and interested me.

“If you get people in and trust them, you absolutely have a chance to create opera here.”

Probably also because of a lower occupancy rate …

Carmen C. Kruse: In my opinion, this is also a question of trust. In Europe, we observe a certain scepticism and prejudice towards new music among the general population, which makes it difficult to trust new opera material. I go to a “Tosca” because I trust that I will like a piece with that title – to give just one example. In North America, there are positive counterexamples that prove that new opera can indeed appeal to a wide audience. Beth Morrison Projects for example, which cooperates with the L.A. Opera, regularly sells out the entire house. If you get people in and trust them, you absolutely have a chance to create opera here. When I trust Civic Opera Creations because they do projects that are based on dialogue and that someone wants to be a part of, more audiences come. We bring new people into opera and work with people who are interested in opera. By involving a wide variety of people in the process from the beginning, they are not strangers to opera. That’s how we succeed in building bridges.

When you start a new production, you don’t know what you’re going to get. Can workshop discussions and open rehearsals be a means of breaking that down?

Leonora Scheib: We want to take this a bit further and not just communicate our work at an earlier stage but in the mindset of reciprocal exchange.

Carmen C. Kruse: Higher participation. That includes questions of themes but also how they are told. We also listen. Grief and child loss are very sensitive topics and socially very taboo. One important piece of feedback from our interviewees was that they want to talk about it. We believe that opera, through its musical level, is predestined to create new access points.

“When we manage to make something tangible that cannot be put into words, we make an important contribution.”

In doing so, after all, you find new stories. Caitlin Smith said in an interview that she is tired of opera performances where she feels nothing and no one has learned anything from the story.

Carmen C. Kruse: Often it’s simply a matter of representation. I have yet to find myself on any opera stage – simply because my part of society has been ignored for a very long time and we are only now telling the stories of the LGBTQI community. We show the stories of our time. When we manage to make something tangible that cannot be put into words, we make an important contribution.

Carmen C. Kruse: We have three pillars. On the one hand, through co-productions with houses, organizers, and festivals. These include the MAIA Festival, the Musiktheatertage Wien, the Landestheater Linz, SWR Experimentalstudio, the CROSS Festival in Italy and 2023 the Theater Münster with “Great Open Eyes”.

Leonora Scheib: Furthermore, through subsidies, which we apply for from federal government and the city of Vienna.

Carmen C. Kruse: The third pillar is foundations and sponsors, although this is still in its early stages.

“It makes us extremely happy when people want to participate.”

People can also donate through your site. How can people contact you if they want to collaborate or get involved in the next project?

Leonora Scheib: The best way is to send us an e-mail at contact@cocreations.eu and we’ll get in touch.

Carmen C. Kruse: It makes us extremely happy when people want to participate.

Translated from the German original by Samuel Obernosterer.