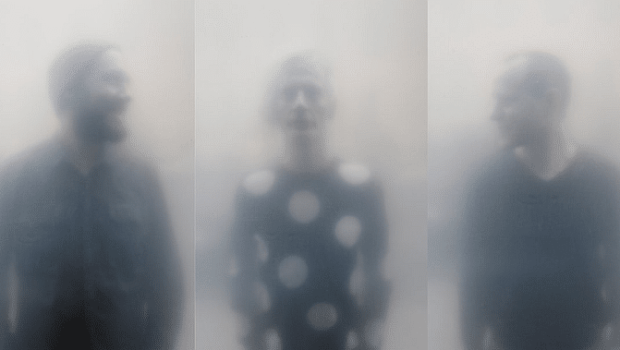 RADIAN are considered pioneers of the Viennese electronic scene. For two decades this trio has dedicated themselves to the research and development of new electronic soundscapes. Now, just in time for their 20th anniversary, they have released a new album, “On dark silent off” . It is an album that sets some slightly different accents. MARTIN SIEWERT and MARTIN BRANDLMAYR were interviewed by Julia Philomena.

Your new album is titled “On dark silent off”, a reference to a quote from the painter Ad Reinhardt.

Martin Siewert: Ad Reinhardt is a man we respect, not just as an artist but also as a thinker. He is one of the few authors of art-theory who also created an enormous amount of art. Therefore we took our title from one of his texts. Besides, Radian likes to work and play contradictions, unfulfilled expectations, or fractures, and we found the title to be very fitting.

In 1999, Peter Tscherkassky released the short film “Outer Space”. He used images from the 1980’s, a horror film with Barbara Hershey, using contact-prints to create “Outer Space”. Was that also an influence?

Martin Brandlmayr: In 2012 we accompanied silent films as part of the Viennale. One of those was “Outer Space” by Tscherkassky. It was an impressive piece and followed us for ages. This evening could be considered the beginning of the album, particularly the piece “On dark silent off”

How can we imagine your process for live film accompaniment?

Martin Siewert: It was different from film to film. Nothing was purely improvised, but that never really happens with us. If we improvise, then in the studio during the development of a new composition for example. On stage we always have a strong structure. In this case some of the films, “Outer Space” or “La Jetée” from Chris Marker, were fairly accurately defined. We practiced for a few months for them.

Martin Brandlmayr: Inside of our strict constructions possibilities for improvisation sometimes open up. During the film work that really wasn’t the case. We stuck to our exact plan and left nothing to chance.

What role does the visual play for you today?

Martin Brandlmayr: I would say that we still have a very visual approach to music. Creating Radian pieces is like creating a sculpture.

Martin Siewert: For me it is a mutually enriching relationship. It is important that film music doesn’t succumb to a hierarchy, supporting images or just illustrating them. I am interested in scenarios in which there is a certain equality in regards to the hierarchy. In which both the film and the music can function as independent artworks. In that sense I think we were successful with the Viennale evening [laughs] . Radian have completed another big film project with Billy Roisz and Dieter Kovačič (dieb13). You could say the visual remains omnipresent.

“Scary Objects” is the third track on the new album. In what way do the emotions of a horror film, like one experiences in “Outer Space” play a role?

Martin Siewert: The acceleration level of the film “Outer Space” was a good input for me and if you were to look for it, you can find that in the track, or the album in general.

Martin Brandlmayr: And suspense, naturally. I would say that the number begins with a reserved tension, so long until it erupts. That is the reference to the film.

Can you tell us something about the recording process for the new album?

Martin Brandlmayr: We are always in the recording process [laughs]. The first version of the current pieces were created in 2012, as part of the Viennale evening. From then on we continued to work on numbers. We recorded piecemeal. There are no recording sessions with us. We successively record new material, add it to the already existing and that is how a piece grows.

Martin Siewert: We are constantly rejecting as well. It is a modular process and the practice sessions are very essential.

How often do you rehearse?

Martin Brandlmayr: There are various modes. Right now we are practicing our live versions. The three of us get together, work together, and it is very time consuming. For an album it looks different. Often it is just two of us and we just focus on recording drums or guitars. Another form are the processing sessions. Sounds are sent through outboard equipment. Huge amounts of material are recorded for that, sometimes collectively and sometimes individually.

Martin Siewert: A lot of the things that could eventually be defined as an arrangement were edited by Martin. We spend a lot of time collecting diverse and inspiring sounds that then come back to us from Matz in a different form. He also does a lot alone.

Martin Brandlmayr: A good analogy might be the distillation process [laughs]. On the older records, especially in the old Radian constellation, the end product was quite clear. The pieces were completely composed, we went in to the studio and recorded them. Now I find it interesting that through the various working styles, sometimes collective, sometimes separately, much different things can be taken from the pieces. In the meantime some of the most obscure variations develop right at the end. We sat in the studios for ages tweaking them. That was a totally new approach for Radian.

Martin Siewert: There really are a few pieces that found their form only at the very end, and years worth of reflection were discarded [laughs]. And we are actually very happy with the end results.

When do you consider a piece finished?

Martin Brandlmayr: When it has to be finished [laughs].

Martin Siewert: Deadlines are actually really good, If there weren’t any, then the whole thing would probably take much longer.
Martin Brandlmayr: That’s why I enjoyed the last month so much. It was really interesting that so much happened because we were pressed for time.

Martin Siewert: On the one hand all of the technical things, like the mixing, have to happen at a certain time, and on the other hand the content has to be defined in time and given form. I noticed on other projects that when there was no deadline we often missed the point when we should have stopped. In collective situations the reflection and the questioning has to stop sometime, otherwise it starts to get on your nerves, doesn’t get any better, and remains incomplete.

Do deadlines force you ignore your own satisfaction?

Martin Siewert: No, it is important to be satisfied. But it is also important to keep an overview, set priorities, and then decide which pieces are worth investing more time into and which aren’t. There is one piece on the album “Codes and Sounds”, that was developed unusually quickly, unlike any before. That was actually meant to be an outro for another piece and took on its current form after 3 or 4 hours of refinement.

On the homepage for Wien Modern, the announcement for your album presentation on September 5th in Semperdepot says “The first purely Trio album of the new lineup with Martin Siewert is closer to rock music and song format than anyone would have imagined 20 years ago – when both had been declared as dead. Or is this actually a return to the roots?”

Martin Siewert: Well, the words “return to the roots” aren how I would describe this album (laughs). But to say it is something totally new is probably too presumptuous. Other people have to judge that. There are definitely things that make this record different from earlier albums.

Martin Brandlmayr: And that’s what it is about, bringing in something new. We didn’t want to completely get rid of the old. We will always be floating in the Radian cosmos. In that sense we are moving in a somewhat closed environment. Its ok that we repeat structures or variations. I think variations play a defining role with us. The “new” can be found in the sounds, or through the more improvised character than we have used in the past. That we tried to capture moments was already there , but this time we were more more radical about it and gave these moments more space and meaning.

Martin Siewert: There is new in the instrumentation as well: there is a saxophone, an acoustic guitar and even a guitarron. And for the first time there was a guest.

Martin Brandlmayr: Well, other than the album with Howe Gelb [laughs]. That was really something special, because it was the first time we had to be confronted with other peoples song material. It was a wonderful process and a nice experience to have to find an approach. We were forced out of our bubble.

What can we expect as part of the 20th Anniversary of Radian and the upcoming concerts?

Martin Siewert: There will be pieces from the album that will be performed live for the first time. We are still working on that and it isn’t so easy. Mostly because huge parts of it will mean there is a new program to experience.

How does it look after 20 years? Have you, as is so often said, done pioneering work for the Austrian electronic scene?

Martin Brandlmayr: In the first two years Radian was research for all of us. It was about finding an electronic aesthetic, bringing synthesisers and acoustic instruments together, or to modulate sounds that were album oriented. A lot of pieces were produced that I would actually call studies. It was never planned that we would make this pioneer status.

Martin Siewert: Talking about the early years of Radian, as someone who used to be an outsider, I would say that there weren’t many ensembles that were working with such an abstract sound while simultaneously working with such a defined rhythmic field. I do believe that that helped create a new awareness. Not just in the electronic, but in the music scene in general. Martin Brandlmayr is the only drummer that has such an extreme originality and recognisability that the whole world, well the whole expert world, would immediately recognise one of his brush sweeps. How he grooves, is just different. I don’t know why either.

Bob Dylan was awarded the Nobel Prize. Reason to celebrate?

Martin Siewert: As a giant Dylan fan I would have to say it is a shame he didn’t get it in 1997 for his “Time Out Of Mind” album. But better now than never! I think it is good, but I can’t judge it objectively [laughs].

Julia Philomena (translated from the German by Dave Dempsey)