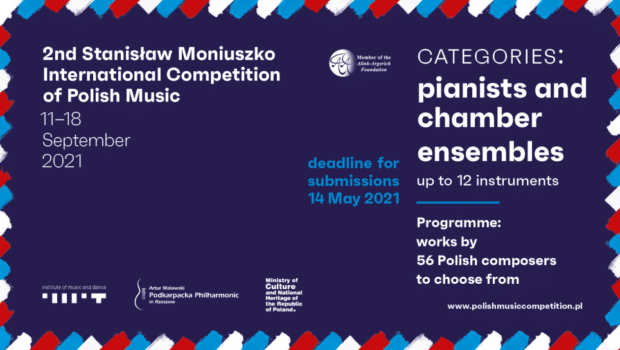 Musicians are invited to participate in the 2nd edition of the Stanisław Moniuszko International Polish Music Competition, which will take place at the Artur Malawski Philharmonic Hall in Rzeszów from September 11 to 18, 2021. Prizes worth a total of 80,000 euros will be awarded. The competition is open to musicians for piano and chamber ensembles. The competition is organized by the Institute of Music and Dance and the deadline for submissions is May 14, 2021.

Poland is famous for its international competitions including the International Fryderyk Chopin Piano Competition and the Henryk Wieniawski International Violin Competition. Apart from these events, the Institute of Music and Dance invites Polish and international musicians to tap into the legacy of Polish composers for the second time. The primary objective of the Stanisław Moniuszko International Competition of Polish Music is to rediscover and disseminate the heritage of Stanisław Moniuszko and other excellent Polish composers amongst a wide spectrum of listeners and to promote 19th– and 20th-century Polish music, which has been forgotten or – for various reasons – has been less popular in concert practice.

In the competition, the contesting artists will present the works of 56 Polish composers, most of which were composed in the 19th and 20th century. The competition is open to musicians and instrumentalists who apply individually or as chamber ensembles – from duos to twelve-person ensembles. There are no restrictions in terms of the age and nationality of the participants. The call for applications will be opened in a few weeks and will end on 14 May 2021. Additionally, separate eliminations for Polish candidates will be organised in Warsaw – the exact date, place and regulations of the preliminary round will be announced soon. For each category of the competition, a separate Jury will be appointed, consisting of distinguished Polish and foreign musical artists and musical personalities.

The musicians participating in the competition also get the chance to win many special extra-statutory prizes that range from financial prizes to performances in leading concert halls in Poland and at festivals – said Katarzyna Meissner, the Director of the Institute of Music and Dance. – Additionally, Polish Institutes that cooperate with the competition, grant the selected winners with the possibility of performing recitals in the cities of their headquarters including Bratislava, St. Petersburg and Vienna. The winners of the competition can thus not only present their skills but also promote the work of less known Polish composers all over the world.

There is one more surprise for the participants – the possibility of having a live recording of selected music pieces in the course of all the stages of the competition. The selection of the most interesting recorded pieces will be released as a multi-disc series – an audio chronicle of the competition. Some of the compositions featured in the compilation will have their worldwide premieres on the phonographic scene. DUX – a leading Polish label, which has been awarded for the quality of its productions both in Poland and abroad, will be responsible for the recording and release of the series.

The 1st edition of the competition took place in 2019. It attracted 81 participants from 6 countries. The winner of the piano category was Pavel Dombrovsky (Russia), while the chamber ensembles category was won by the violin duo Marta Gidaszewska and Robert Łaguniak (Poland).

The contest regulations (“rulebook”), the calendar of the competition, application forms, information about the repertoire, composers and musical materials, as well as all the news related to the competition and its course, are available on the website: www.konkursmuzykipolskiej.pl/en/. The competition is financed by the Polish Ministry of Culture and National Heritage.