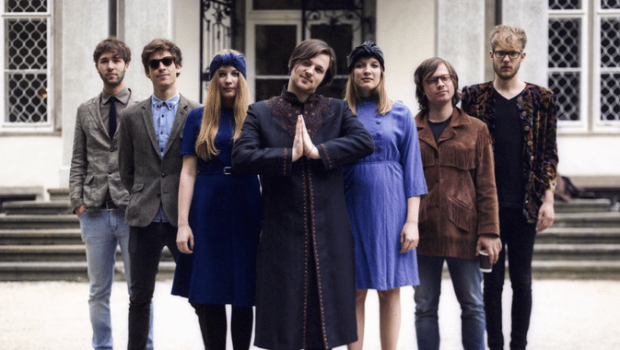 The Graz-based band Polkov is currently still considered as an insider tip of the local music scene, but this could change pretty soon. With their self-titled debut album, Polkov give us beautiful songs that have the potential to appeal to a wide variety of music fans.

True strength lies in calmness and restraint. At least this is the conclusion you come to when listening to the new tracks of these six highly talented musicians. Polkov leave the field of dramatic pop gestures to others. Instead of seeking to produce a hit on the fly, the band leader Laurenz Jandl and his band colleagues Paul Pfleger, Juergen Schmidt, Guenther Paulitsch, Alex Hackl and Florentina Finder give their songs all the time they need to completely unfold.

Their debut opens up on a more gentle and low-key note. This does not mean that this combo is holding anything back, but rather that the sound of Polkov is very subtle, smooth and comforting. Inspired by artsy pop music of the 70s, the sextet pursue their way through engaging and incredibly American sounding musical stories. It is as if you were cruising down south through the open countryside in an open convertible on the Route 66, with a song on your lips – at least this is feeling you get once you press the play button.

Located somewhere between spacy art-rock, acoustic and country, with occasional infusions of brit-pop, the exciting and varied songs of Polkov have their very own vibe, which is sometimes soft and melancholic and then again wonderfully dreamy. Picking out individual highlights from the variety of sublime tracks is not an easy task. Perhaps one could emphasize the pleasantly relaxed and laid-back opener “Kamaro’s Song”, the bittersweet, balladesque track “Changes” and the beautific, upbeat and driving song “Inbetweeners”, which are most likely to stake out the wide musical spectrum of Polkov.

With their new album, Polkov have definitely marked their spot with a huge exclamation mark in the local music scene. If things turn out right, we can be sure to hear a lot more from this band in the future.