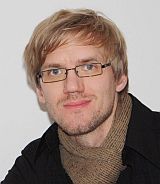 Fast Facts:
Lukas Neudinger, born 1980 in Eisenstadt, studied composition with Johannes Kretz and Christian Minkowitsch at the Vienna Conservatory, as well as violin, viola and music education. In 2003 he was awarded the Burgenland Youth Culture Prize for Music, the 2005 inaugural Jenö Takács-Prize and in 2006 and 2007, the Jenö Takács recognition award. He is solo violist in the orchestra of the Vereinigten Bühnen Vienna and a substitute in renowned orchestras including the Vienna Symphony Orchestra, the Composers’ Orchestra of Lower Austria and ORF Radio Symphony Orchestra Vienna. He can look back on a variety of chamber music concerts in various formations and is also active as a teacher of violin at Viennese schools. His compositions include solo pieces, chamber music and orchestral works, as well as music for commercials.

Portrait:
Starting point for Lukas Neudinger’s compositions are of different nature: on one hand, he is inspired by non-musical ideas which he turns into music, in other cases, he takes ideas from compositional structures. But apart from these theoretical considerations, it is also the implementation of the sounding results that are of the utmost importance for the composer. Therefore Neudinger follows his performance as a violinist or violist just as intense as his compositional activity. Perhaps hence the fact that Neudinger almost exclusively uses acoustic instruments. In his earlier works, the references to past composers were significant, but now he has turned to  tonal and atonal modes of composition,  which increasingly use effects. But as with the use of all the musical means, it is important for Neudinger to not only use these for its own sake, but to serve the realization of the innate compositional thought.

“String Quartet vs. Piano” for piano quintet,
premiered 2006 in Eisenstadt.