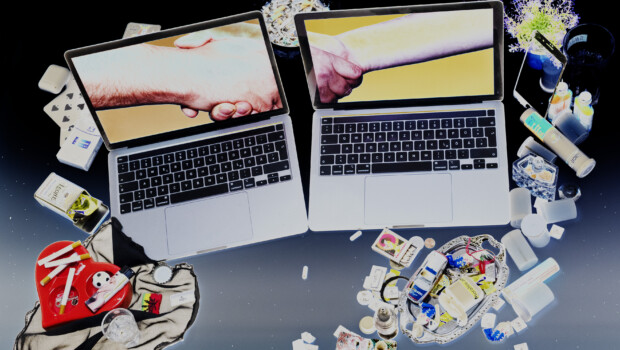 The video portrait in a new format: AUTPUT portrays musicians in an extraordinary way, as this project does not simply interview musicians with a film camera. Rather, artists get to introduce themselves by working on an individual concept with the creators of the platform. The collective PRODUKTION PRODUKTION is the creative genius behind the project AUTPUT. Its founders, EMELY MAIR (aka EMY MAY) and FLORA FEE MAYRHOFER, spoke with ITTA IVELLIO-VELLIN about their new project.

The name of your project is AUTPUT. What is it about and how did you come up with it?

EMY MAY: Music has always been an important part of my life. During the lockdowns, I started becoming even more interested in music. Due to the corona crisis, there is this complete break and musicians are unable to perform live. That’s a shame and I thought, since I create film projects – maybe I could combine music and film. Live streaming concerts had been happening for a while on Facebook and YouTube, but we wanted to create a different concept, one that tells a story. So, I came up with a concept, got Flora involved, and refined the concept with her.

FLORA FEE: Exactly, and the result is called AUTPUT. It’s about the output of Austria’s music scene. Right now, neither travelling nor concerts are possible, which is why we created a platform with which we can present and introduce musicians across borders. Our concept takes up the idea of video portraits, but it represents the vibe of the artist’s music and personality. Paul, for example, from Paul’s Jets, with whom we did our first video, is a quirky and playful guy, and his music sounds like that. That’s why we chose this everyday-life story format for him. We did a lot of research in advance about which video formats there are already, such as classic interviews and home visits. However, in these cases, it’s always the finished format that is used on every person in the same way. We wanted to offer something more creative, and to work together with the musicians in creating the concept individually.

EMY MAY: We don’t want to make video portraits ABOUT musicians, but rather WITH them. Whether we show everyday-life stories or abstract experimental worlds, we always want to include a song in the videos. So far, we’ve done that once with a live version and once with a music video. But the song is always part of the format and the aesthetic.

How did you two get together?

FLORA FEE: We both went to Graphische and became friends there.

EMY MAY: We are also both members of a studio, Bagage in Piaristengasse, which we co-founded. We also have similar interests, so it works out nicely.

How do you choose the musicians for AUTPUT?

EMY MAY: On the one hand, we do a lot of research and, on the other hand, some of them are acquaintances. For example, I already knew Paul and had worked with him before. And WANDL, with whom we did our second video, was Flora’s wish. It has always been a dream of yours to do something with him, right?

What does the process look like after you’ve chosen the musicians?

EMY MAY: We go for a walk or meet in the park. Then we talk with the musicians about life and see where we can find similarities and common ground and how we can create a concept from that.

FLORA FEE: Most of the time, however, we went to the meetings with relatively specific ideas. We also spent a lot of time with the musicians and became friends with them. Since everyone is working for free, we are able to spend a lot of time on the project – we’re not dependent on sponsors.

“We don’t want to make video portraits ABOUT musicians, but rather WITH them”

How long does it take to produce an AUTPUT video? For example, Paul’s video, from conception to the finished video?

EMY MAY: We started shooting relatively quickly. Almost too quickly, we even had to re-shoot and add a couple of scenes. The video cut was a completely different story, though. It took us around three months to finish the whole video.

FLORA FEE: Yeah, but that was largely due to post-production. It was our first video, so it just took longer to edit. Otherwise, we would have done it in a month.

How do you put together the AUTPUT production crew?

EMY MAY: We always check in advance which role we want to take on, whether it’s directing, or just production, or camera. And then we just look for the rest of the crew we need. Often, even before we talk to the musicians, we think of camerapeople who would be a good fit for the project or the musician. Or the musicians know people with whom they have worked well in the past.

FLORA FEE: The next video to come out is WANDL. It premieres on February 28th! Other musicians are already planned, but you’ll have to wait and see who is next!

Thanks for the interview!

Translated from the German original by Itta Ivellio-Vellin