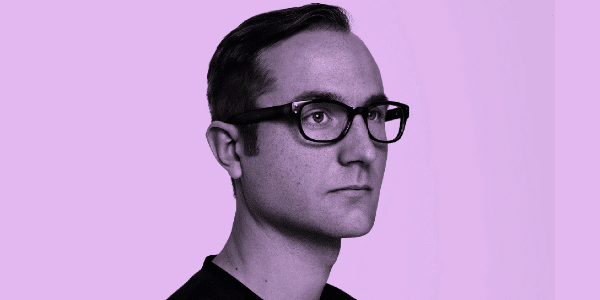 JOHANNES AUVINEN is releasing “Akkosaari”, his first album under his own name. A Viennese by choice, who under his stage name TIN MAN has been shifting the definition of acid techno since 2004, puts the bass synthesizer aside for now and sneaks through strange worlds – to produce acid that isn’t acid at all. At least not if you’re having the whine of a Roland 303 in your ear. “Akkosaari” pumps two liters of sacramental wine through the organ tubes, swings incense across the holy ambient space and performs two intercessory prayers. In honor of Deep Listening, of course. JOHANNES AUVINEN spoke with Christoph Benkeser about grumbling in Vienna, a sightseeing tour through the Hollywood Hills and music from the zone.

As Tin Man, you’ve been permanently reinventing acid techno for over 15 years, you are a popular DJ and are working with various producers around the world. For about a year everything is in a standstill and now there’s a new album release – without acid.

Johannes Auvinen: In a normal year, I’ll be playing four to six times a month. That has all stopped for the time being. Anyway, this is not new to me. Before I was able to make a living from my work as a musician, I had normal jobs.

At what point were you able to make a living from music?

Johannes Auvinen: I released my first record “Places” in 2004, and started playing concerts in 2010. From 2014 on I was able to make a living from my work as a producer and DJ.

What did you do before that?

Johannes Auvinen: I grew up in California, studied in Los Angeles and then I worked for a toy company. In my spare time, I recorded music. In 2007 I moved to Vienna – that was an opportunity for me to try out living as a musician.

Johannes Auvinen: There are clubs in every European city. In the U.S. it’s completely different. Also, you have to travel long distances to get from one city to the next. In Vienna, I’m in the center of Europe. The city is – compared to Los Angeles – small and manageable. In L.A., people are also superficial, it’s difficult to have contact with creative artists there.

One of the first records you released in Vienna was called “Vienna Blue”.

Johannes Auvinen: “Vienna Blue” was released in 2011, and a year before I performed for Austria at the Expo in Shanghai, where I played with violinists, cellists and clarinetists. Ideas for the record came out of this performance. The songs were to be less techno and more pop.

On the title track, you are singing “I love you Vienna, but you are killing me.”

Johannes Auvinen: In the beginning, it was difficult to be well received here. Now everything is stable, everything is going well -– especially during the Corona period. When I think about what kind of life I would have led in Los Angeles during the pandemic … That would have been a horror, especially because of the social situation.

What do you remember from your first time in Vienna?

Johannes Auvinen: The club scene is what I remember. There were many small bars and such lounge-like locations, the music at Donau or Elektro Gönner inspired me.

That’s where you played later yourself.

Johannes Auvinen: For me, small clubs are more interesting. In general, parties are better when they are smaller. People often ask me about my favorite club or what it’s like to play at Berghain. I always say: Small clubs where people are connected to the music and simply want to dance are always better. Maybe that’s the reason why I haven’t played many festivals in recent years. The connection with the audience is missing there.

A connection you’re not looking for in the club scene now with your new record “Akkosaari.” It’s a step towards ambient sound design.

Johannes Auvinen: Yes, I wasn’t thinking about clubs for this record, but about the music I discovered when I was 15, 16 years old. At that time I was looking for electronic music in record stores: Jean-Michel Jarre’s “Équinoxe”, albums by Brian Eno and soundtracks from films by Tarkovsky. Editions Mego from Vienna, which was simply called mego at the time, has also always inspired me.

Your new record is released on Peter Rehberg’s label. How did you get to know him?

Johannes Auvinen: I met Peter in Los Angeles in 1997. I wasn’t even 20 but was a big fan. He was touring with Christian Fennesz, Russell Haswell, Florian Hecker, and Mika and Ilpo from Pan Sonic – almost all my heroes in one place. So I wrote to him before and we then met up for sightseeing.

Johannes Auvinen: Yes, we drove through the Hollywood Hills and then got stuck in traffic for hours. By the way: At the same time the Finnish record label Sähkö Recordings was just as good for me, especially the music of Mika Vainio and Ilpo Vaisänen. Their music influenced me, it was important for “Akkosaari”.

How did you come across Sähkö’s music at that age?

Johannes Auvinen: Through my older brother. He was studying at UC Santa Cruz, a liberal university in California, where I was allowed to visit him. At that time there were a lot of people experimenting with psychedelic drugs there. All of a sudden I heard this music –and was totally hooked.

“Akkosaari” transcends the psychedelic and moves into the sacred.

Johannes Auvinen: Because I was inspired by Tarkovsky’s “Stalker.” The film, just like “Solaris,” has a spiritual level that is reflected in the sacred music. Chorales by Johann Sebastian Bach also appear in “Solaris”.

How can this music from the zone be described?

Johannes Auvinen: In “Stalker,” of course, it’s different. There is a narrative and characters that play a role in it, but it’s more about getting spaced out in the zone. The music captures that element. It doesn’t give an answer within the narrative because it’s developing in one direction at the same time, yet it isn’t moving at all from the spot.

“I INCORPORATED ACID ON AKKOSAARI”

“Akkosaari” is music to get spaced out.

Johannes Auvinen: Akkosaari is an island in Finland and the title is related to that. One piece is about how the ice is changing in Finland.

These are themes pointing towards nature. The counterbalance to the machine-like music you are usually producing.

Johannes Auvinen: True, the album is an organic product.

You’ve been producing acid techno for many years. Do ambient outings like “Akkosaari” create a distance to maintain your interest in acid?

Johannes Auvinen: I incorporated acid on “Akkosaari” as well.

You’ll have to explain that to me. One doesn’t hear the acid sound of the Roland 303 on the record.

Johannes Auvinen: Acid resonates with something abstract for me. When your perception suddenly changes, it can create a shock. As a listener, you have to take a step back and look at the situation anew. On “Akkosaari” this includes something like a constant crescendo. The music develops in one direction or suggests that it’s developing in one direction. At the same time, Acid has to do with misusing technology. A 303 is like a tool that you can use in many different ways.

What do you mean by that?

By using it against its original purpose?

Johannes Auvinen: Yes, the Roland TB-303 was supposed to sound like a real bass player, which of course was nonsense. The people who used the thing quickly realized that. Some used it differently – and opened up new possibilities.

That’s why you mentioned that “Akkosaari” is also acid.

Johannes Auvinen: Yes, and yet it’s not a Tin Man record. I’m not using a 303 on “Akkosaari.” Also, the album is more personal. That’s why I’m not releasing it under my pseudonym but under my real name.

What makes the album so personal?

Johannes Auvinen: It has to do with my family history. Akkosaari is a real place in Finland. My father spent his youth there.

“THERE ARE MANY AKKOSAARI IN FINLAND”

Didn’t you say earlier that Akkosaari is an island?

Johannes Auvinen: Yes, it’s also an island. There’s a story about that. You have to know that akko translated from Finnish means “old lady.” So one day in spring, an old lady had died on an island. Her body was to be transported by horses over the frozen water. But the ice was not thick enough, so her body was left on the island.

Johannes Auvinen: I don’t know. I don’t think this story is true. After all, there are many akkosaari in Finland.

And the place where your father grew up.

Johannes Auvinen: Yes, the area where he grew up is surrounded by lakes. The whole country is made up of lakes, everywhere people are living on islands. That’s why, when I was told the story as a child, I believed it. Even today I can picture it well – a lake, the mist, and the spooky atmosphere that surrounds it. There’s something mysterious about it.

You once said the same thing about the Roland 303. With “Akkosaari” you are creating a new context.

Johannes Auvinen: I want to do more productions in that direction. The framework will still be the idea of the soundtrack because I want to tell stories. However, it doesn’t always have to be ambient music.

So what would it be?

Johannes Auvinen: The next project will be something Austrian that has to do with Schubert.

The age of classical music from “Vienna Blue” is coming back?

Johannes Auvinen: “Vienna Blue” was more about romantic ideas. Schubert interests me because his music had a big influence on Kraftwerk, at least that’s what I think. Moreover, I’m seeing Schubert everywhere in the city here. His death house is near my apartment.

Johannes Auvinen: In my first years in Vienna, it didn’t interest me at all. In the meantime, I enjoy being accompanied by the composers of this city.