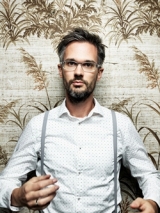 For the 18th time, the Austrian Music Fund has invited local music acts to apply for financial support for their production. A total of 90 musicians applied, of which 25 were selected. One of these 25 musicians is Ben Martin, who is no stranger to experts on the local music scene. With his various ongoing projects, he has been able to address quite a wide audience of several genres. “Born Under Dark Skies” is his sixth solo album, which he just recently presented to the public at the Waves Vienna Festival.

Ben Martin, whose real name is Martin Rotheneder, originally comes from St. Pölten in Lower Austria and is probably one of the busiest musicians in the country. He started playing the guitar at the age of 7 and soon started a few bands, which got lost in the sand between the first heartbreak, late sprawling chest hair and various other (post-) adolescent tragedies. During the growing pains of teenage years, one of his greatest loves was always his instrument, which motivated Ben Martin to study jazz guitar. In this time he got intensively involved in modern jazz and blues, but also never shied away from other music genres.

His keen interest in many diverse sound worlds introduced him to a broad Austrian scene. He has ever since been in contact with many local artists with whom he not only meets for a cozy chat, but also for various music collaborations. His collaborations include Jazzwerksatt Wien, Viennese Soulfood, and the no less famous 5/8erl in Ehr’n. In addition, he has always been drawn to the pop/rock division, where he has already worked with members from the band Tyler, the artist Axel Wolph and Esteban’s. 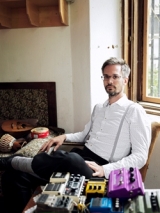 To extend Ben Martin’s solo program, there are two large projects that especially embellish the résumé of the Lower Austrian artist. In 2007, Ben Martin founded the electronic pop band called I Am Cereals and has ever since been seriously working on this band project, together with Gerald Huber, Daniel Letschka, Felix Teiretzbacher, Marcus Hufnagl and Christoph Richter. I am Cereals is probably one of the biggest successes in Ben Martin’s career plan. With a lot of radio airplay and two successful albums, the band was nominated for the Amadeus FM4 Award in 2009. Similar matters correlate to his other project The Black Riders, founded together with drummer Michael Prowaznik. Some of the songs from the album “On the Horizon” made it on rotation at the radio stations Ö3 and FM4. As if that were not enough, Ben Martin also founded his own label Violet Noise Records a few years ago and has been working as a song writer for BMG Rights Management since 2010.

After multiple musical excursions, the name of the game was once again “back to basics” for the singer/songwriter. While still focusing on other projects, Ben Martin slowly started collecting new ideas for his new solo album. The first demos followed in the summer of 2009 and only a few months later he had his whole concept set and started working on the implementation. The idea was to produce the recordings with a small acoustic ensemble. Thought and done. The cast list here truly speaks for itself. The songs were recorded with the prestigious musicians Lukas Lauermann (A Life, A Song, A Cigarette) on the cello, Matthias Frey (Sweet Sweet Moon) on the violin, Lukas König (Kompost3) on the drums and Martin Eberle (Jazzwerkstatt Wien) playing the flugelhorn. With these great musicians and instruments, the collaboration on the arrangements was so intense that they soon had 12 songs. Ben Martin would not be a through and through full-blooded artist, if he wouldn’t find imperfections in his work. Driven by the quest for perfection, he let it rest and mature for a while. Finally, in the summer of 2011, the songs were finalized with the last finishing touches. A total of 8 songs now partially draw some very dark and complex themes throughout the album. “Born Under Dark Skies” clearly shows how the initially heavy mood of Ben Martin gradually lightens up, and finds a joyous finale in the song “The Big Man Arrives”.

Now in the fall, when the days get shorter and the skies cloudier, the delicate melodies of “Born Under Dark Skies” from the perfect soundtrack to warm the heart and lift a melancholic mood in the cold season .

The next opportunity to experience Ben Martin live is the 23rd of November, when he will be performing his new songs at the premises of the Viennese Local. According to the unrestrained creative eagerness of Ben Martin, this is definitely not the last we will be hearing from him.