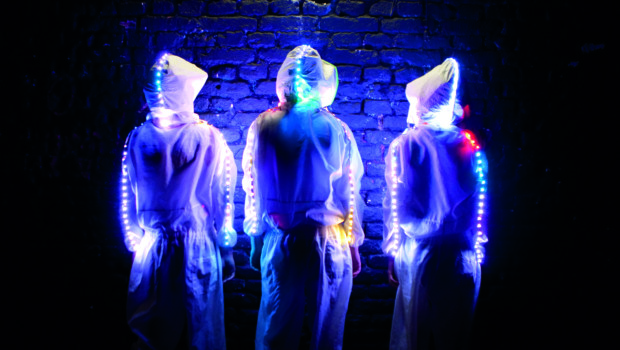 Artist Portrait
A darkened room full of sweat dripping party people, on stage a LED-backlit trio in 90s space outfits, giving the dance crazy audience hell. The performances by Gudrun von Laxenburg not only demand an audience with a stable circulatory, but also a strong stamina when dancing to 170 bpm. Slower beats and less eccentricity are out of question.

It does not surprise that this “tekkno-punk madness” – as the three call themselves – was formed after a boozy New Year’s Eve party. In the shared apartment of Julian Skone and Daniel Helmer, the night from 2008 to 2009 was apparantly celebrated so hard that they had to endure a long list of neighbor complaints. This in turn inspired them to create a protest song, but not from their own perspective, but from the view of the neighbors. Gudrun von Laxenburg was born, but could not have been done without the foundation of the well grounded musical skills of the duo, which soon after turned into a trio.

After completing his community service, Julian Skone, who already started playing drums at the age of eleven, cursed his teenage aversion to regular instrument practice and from then on went to becoming the high-speed drummer that give Gudrun von Laxenburg that extra edge as a live electro band. In turn, Daniel Helmer comes from a music affine family with the love for music already in his blood. After gaining experience as a bassist and guitarist in several punk bands, he found himself drawn to the analog music style of the 90s. The sound engineer had also already learned an instrument as a child. To his dismay, he didn’t get an accordion or a set of drums from his parents, but instead a violin, which he still plays.

In Gudrun von Laxenburg the three music aficionados unite a wild mix of analog synthesizers, heavy bass lines and the aforementioned live drums, which Skone trys to play as fast as possible. Their sound is kind of a musical satire on trashy 1990 party hits. Humor is a always must on stage, paired with a heavy bass and a dancing crowd.

Since dancing is one of their main claims, the three musicians have decided to rather be a live band than studio band. In this sense, it is not surprising that they have only released one EP “Rave kaputt, was dich kaputt macht” up to this point. Clearly their music is also well received on the radio. Austria’s favorite alternative radio station FM4 not only chose the single “Attack, Decay, Sustain and Release Me” for the compilation “Soundselection 25” in 2011, but also played the track quite frequently.

As you can imagine, Gudrun von Laxenburg are a popular festival act with the mission to get the masses dancing. With the heavy beats and the luminous LEDs, these audience favorites will certainly continue to be worshiped by plenty of dance-crazed crowds in the future.