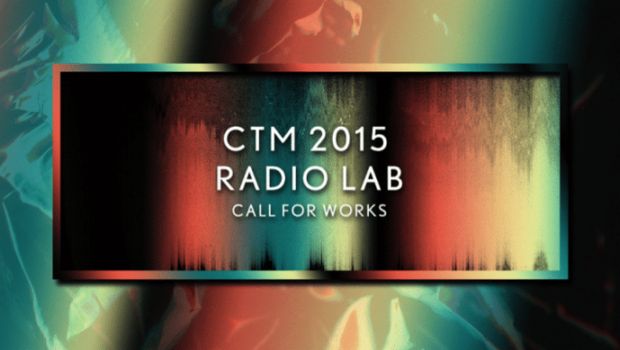 Following a great response to last year’s open call for works, Deutschlandradio Kultur – Hörspiel / Klangkunst and CTM Festival, in collaboration with the Goethe-Institut, ORF musikprotokoll im steirischen herbst, Ö1 Kunstradio and the ECAS/ICAS networks, are pleased to release a second call for artistic projects seeking unusual ideas for coupling the medium radio with the potentials of live performance or installation, while also relating to the CTM 2015 Festival theme: Un Tune – Exploring Sonic Affect.

The call is open to artists in the fields of experimental music, sound art, radio art, new radio drama, and performance. Two chosen commissioned works will be presented as a Deutschlandradio Kultur – Klangkunst broadcast and premiered as a performance or installation at CTM 2015 Festival in Berlin (23 January – 1 February 2015). The works will also be presented by the Österreichischer Rundfunk (Austrian Broadcasting Corporation) via one of their platforms (depending on the character of the works): the ORF Zeit-Ton or Ö1 Kunstradio radio shows, or the ORF musikprotokoll im steirischen herbst festival in Graz.

A special note that last year’s winning projects, selected from over 300 submissions, will once again be presented live in the fall of 2014 as a performance or radio broadcast. The French radio collective P-node will partner-up with local radio activists and artists during the ORF musikprotokoll im steirischen herbst festival, to create an experimental radio laboratory in the festival’s host city of Graz, Austria (7 – 12 October). On 10 October the group will visit the studio for a live broadcast on Ö1 Zeit-Ton extended. “Walk That Sound” by Serbian artist Lukatoyboy will be aired on 12 October via the ORF Ö1 Kunstradio programme.

Through its Un Tune theme, CTM 2015 aims to engage with the direct bodily effects of frequencies, sound, and music as well as with their synergistic effects with other sensory stimuli. Artistic experimentation with the affective and somatic effects of sounds and frequencies opens up possibilities of tuning and de-tuning the composite that interconnects body, matter, energy, and (musical) machines – and to explore the workings of our perception.

With the discovery of electricity, sound recording, and electro-acoustics, the coupling of sound and sounding body is no longer inevitable, yet at the same time is rendered more intense than ever before. In the digital age, sound finally became fully autonomous: As a pure stream of information it is now amenable to any method of synthesis, transformation, or analysis without the involvement of a sounding body in the conventional sense. In return, artists today increasingly search for new ways to re-inject their own bodies and others back into electronic music, and evaluate new roles for the body in the field of sound.

Sonic events – e.g. noises, sounds, music – are not perceived by the ear alone. Their effect upon the human body goes beyond the stimulation of the various sensory organs. Acoustic vibrations obtrude and invade the body and its tissues, and are processed not only at a conscious level but also unconsciously, triggering uncontrollable physiological and physic reactions.

Technological developments now give us the means with which to better understand and explore these and other affects. Such artistic experimentation operates between antagonistic coordinates such as pleasure and displeasure, self-empowerment and the internalisation of control mechanisms, personal and collective experience, and the experience of the self as both subject and object.

At the same time, machines have themselves become part of our self-perception and of the perception of our environment. Distinctions between natural, ambient, and anthropogenic sound sources have gradually eroded, joining human and non-human actants into one structure: a sonic landscape that is no longer purely natural nor merely a backdrop, but is always permeated by culture and technology. In order to embrace such experiences, dissolution or loss of control in the form of a temporary disempowerment of the perceiver’s position as the listening subject is required. Through such decentralisation we become open to non-hierarchical connections between our surrounding sonic phenomena and allow ecological dimensions to enter the study of the affective potential of sound.

In the spectrum between bio-acoustics, field recordings, ambient, flicker, brainwave entrainment, binaural beats, biofeedback, psychoacoustics, neo-psychedelia, hypnotic repetition, noise, and sub-bass vibrations, Un Tune will present works by artists who explore the affective potential of frequencies, sound, and music, such as to address and disturb the human body in troubling and emphatic ways. The interaction between technological systems, immersive environments, and ritualistic practices opens up spaces of experience that temporarily destabilize our habitual states. Unusual fluctuations in space-time, new intensities of sensory experience, and new ways of perceiving create situations that transcend our usual state of being, and may unlock emancipatory potential.

CTM 2015’s Un Tune theme thus shifts the focus from questions of music’s symbolic and cultural significance to questions of the use and functionality of sound and music as affective forces. Somewhere in between physics and cultural semantics, the theme moves from asking “what does music attempt to portray?” to “what effects do sound and frequencies have upon us?”. This questioning also further blurs the distinction between noise, sound, and music – a gradual development that was subject to much artistic practice of recent years and decades.

This open call for works seeks artistic works and new experimentation that critically and creatively reflect on such phenomena. What are the controllable and uncontrollable entry points into the body, perception, sensation, and imagination via technology such as radio, Internet, mobile communication media, and via experiential spaces such ass concert halls, clubs or even one’s own apartment? What potential lies within the manipulation of daily sound environments, or of the interconnection of various collective and individual acoustic experiences? What are the physical and physiological bases of such potential? And how do physical and physiological phenomena correlate to cultural and mental processes? What are the boundaries or confluences between self-empowered activation and heteronomy, between individual and collective experience?

A more detailed description of the Un Tune theme is available via the CTM Festival website:

Submissions from all over the world are encouraged. Submitted projects must be new and as of yet unrealized. A comprehensive project description facilitates assessment by the jury. Submissions should be written in English and include the following materials:

–   CV (PDF)
–   Project description (PDF) with reference to the themes and formats described within the call
–   Sketches, images, audio material if possible (please provide online)
–   Brief outline of the technical requirements for the realization of the project

Please only use the online form below to submit. Incomplete or late submissions will not be considered.

The international jury will be comprised of five persons from various backgrounds (artists, curators, journalists) and will be disclosed together with the results.

The selected works will be supported by a production budget/fee of EUR 5000 each. Technical/staging costs for CTM and eventual ORF musikprotokoll im steirischen herbst festival performances will also covered. Travel expenses to Berlin, as well as lodging for artists will be covered if necessary. Deutschlandradio Kultur and CTM Festival will provide support, counselling, and general assistance during the production of the work.