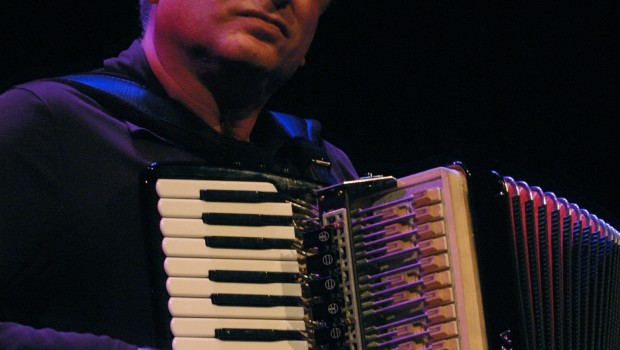 As a true master of his craft, Klaus Paier is a musician who plays the accordion like few others in this country. There is hardly a musical style, which the Carinthian native Klaus Paier has not virtuosically attempted in his many different projects, both technically and compositionally. No matter whether in world music, jazz, classical music or contemporary music, the accordionist, bandoneon player and composer presents himself as a multifaceted and tremendously diverse, open and freedom-loving artist, who seems to excellently navigate in all tonal contexts. It is especially the pleasure of experimentation and a strong sense of curiosity that define him as a musical frontier. While constantly probing the possibilities of his instrument, the Carinthian creates a very individual and distinctive musical language that is enjoyed by many fans in and outside of Austria.

Klaus Paier is an artist who is constantly on a quest for new challenges and strolls between the different forms of musical expression. Inspired by music greats such as Keith Jarrett, Bill Evans, Charles Mingus and Thelonious Monk, he is a prime example of a musical free spirit, who does not limit himself in his work, never shies away from any chances and does not capitulate to musical dogmas.

In his compositions, Klaus Paier consistently tries to reconcile many different styles, which at first sight may not really appear compatible. What especially characterizes this musician is his ability to always redefine the limits and tonal range of his instrument. When it comes to bringing his ideas to their fullest potential, the award-winning artist is not familiar with restrictive views.

Klaus Paier early discovered his love for the accordion and its sound. At the age of eight, he started playing on the accordion. Step by step, he attempted to approach the instrument and to explore its vast sonic possibilities, and it quickly became clear that this instrument does not necessarily have to be limited to merely folk music. No wonder that he soon started studying accordion, jazz and composition at the conservatory in Klagenfurt.

While constantly developing his own style, the Carinthian explored a variety of musical styles (classical, folk, jazz, contemporary music) and acquired extensive knowledge of various genres. Ultimately, it was tango and jazz, which inspired him in particular. Although – looking at his many musical fields of activity, it becomes obvious that his musical language of today goes far beyond these two genres. Regardless of whether celebrating creative transgressions as a soloist, building bridges between jazz and other musical forms in a trio with Stefan Gfrerrer and Roman Werni, sounding out the tension between Balkan sounds, Tango Argentino, modern jazz and classical sounds in a duo with cellist Asja Valcic, practicing free jazz improvisations with the saxophonist Gerald Preinfalk, or exploring contemporary music with the Koehne Quartet, Klaus Paier understands how to always bestow his music with something unique and unmistakable.

Besides his unquestionable instrumental skills, it is especially the pronounced openness to new ideas, which have made Klaus Paier one of the greatest musicians of the country. No matter whether as a solo artist or as a member of a formation, the Carinthian artist always seems to be one step ahead of his time. With the ability to again and again raise his own music to a new level, we may assume that we will be hearing a lot more from this extraordinary accordionist in the future.