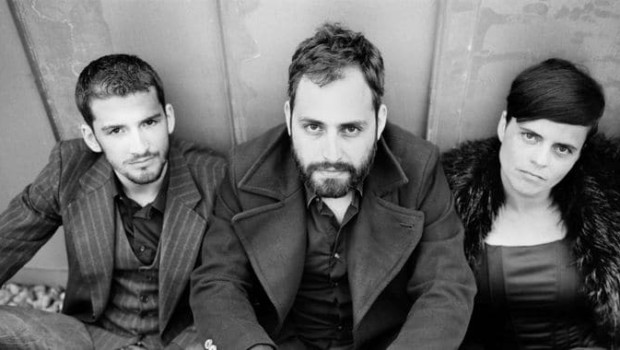 It is probably safe to say that in the past few years Donauwellenreiter have been considered as the new shooting stars of the local world music scene. Seemingly coming out of nowhere with their 2012 debut “Annäherung”, the trio, consisting of Thomas Castañeda, Maria Craffonara and Nikola Zaricalso, have also gained an outstanding reputation beyond Austrian borders. No wonder that their next moves and developments in music are highly anticipated. Listening to their second album “Messëi” (Intuition Records), which will be released on the 28th of March 2014, the question whether they will be able to keep up with their first musical impression can be answered with a clear yes. Once again choosing the route that crosses different music genres and playing styles, the trio has managed to successfully refine its musical language with the help of producer Alexander Nefzger (who also worked with the likes of Clara Luzia and André Heller).

Although the new pieces with the unique mix of tango/minimal music/pop/jazz/Alpine sounds still has Donauwellenreiter’s unmistakable touch, the musical accentuation has moved up a notch compared to the first album. It is probably because Thomas Castañeda (piano, keyboards), Maria Craffonara (vocals, violin , percussion) and Nikola Zaric (accordion) refuse to remain in the same musical spot and have declared this as one of their fundamental principles of creating music. In this sense, “Messëi” is in no way a repitition of the already known, but rather a logical progression.

While the debut was characterized by chamber music elements, with tension rising and falling and was rather subtle as a whole, the new tracks are significantly more exuberant in their musical expression. Contributions to this extended variety and diversion were also made by guest musicians such as  Jörg Mikula (drums), Magdalena Grabher (vocals), Raphael Preuschl (bass), Alexander Wladigeroff (trumpet, horn) und Mario Vavti (trombone), who skillfully understood how to pick up the ideas of Thomas Castañeda, Maria Craffonara and Nikola Zaric and add their own spin to the songs.

All in all one can say that Donauwellenreiter have definitely passed the test of the second album round with flying colors. Unlike many other formations, this trio came out on top and did not let themselves get overwhelmed by too many elaborate ambitions. Donauwellenreiter’s music glides and prances with a delightful ease and lightness across the dance floor, without ever stepping down in terms of musical depth and quality.

Although the official release is set for the 28th of March, the album will be presented in advance on the 22nd of February at the opening gala of the International Accordion Festival in Vienna.