Copyright nowadays is not only protecting artists, but also enables record companies to make money. An Up to date-Copyright should therefore be open to new business models, the exchange between artists and on the other hand be protective enough to guarantee freedom of rights. But can recent copyright really suit everybody?

The Fair Music conference was held In cooperation with Popfest Wien in Project Space Karlsplatz. The participants of the first panel were:

Shamal Ranasinghe, Co-Founder of Topspin, a technology platform for artists to create their own retail channels, promote their products throughout the web, and connect directly with their fans.

Lottaliina Lehtinen, legal counsel at the Finnish Musicians Union. Her main focuses there are in contractual employment and copyright questions.

And host Alexander Hirschenhauser, up to 2007 founder and mastermind of the famous distribution company Soulseduction. Since 2010 he works as a freelancer for the mica – music Austria campaign “Fair Music”.

To open a discussion about copyright in the year 2010 is not one of the simplest things. Too many issues have to be covered, too many different points can be made. So as a matter of fact Alexander Hirschenhauser in a first round asked, what copyright means for the participants. Are they satisfied with the current situation? Is copyright fit fort the challenges?

Lottaliina Lehtinen first pointed out that every artist has a right to choose, which rights he gives away and which not and copyright helps them to do so. But copyright is not only about deciding which right you give away and which not. „Licensing contracts are not always fair.“ The current situation is very much influenced by the big changes the market has been influenced during the last years. She told about a poll that was made in Finland about musician-incomes. Some of the best and most famous artists were asked what their most important incomes are. In the results first of all live gigs were mentioned, second came money from the collecting societies. Royalties from record sells were not even mentioned.

As the role of collecting societies was mentioned by Lehtinen the discussion very much turned into this direction. „How do they track in Finland?“ asked Stefan Baumschlager, cause from his experience he knows that in England they very much do spot checks, what he finds neither representative nor fair. „It is almost absurd when only four weeks are taken as representative fort the whole year“ he said. „No, in Finland it works different“, answered Lehtinen. Detailed reports are made , the collecting societies are provided with substantial information during the whole year.”

Shamal Ranasinghe does not necessarily perceive collecting societies as evil giants. “They are doing an important service for music. But some problems exist, which make it difficult for businesses like topspin to establish themselves.”
„That you sometimes still have to fill out forms and send them per Fax to the collecting company, seems to come out of another age. That is unworthy for a time called the internet age”, added Baumschlager.

But what kind of problems do artists have with the societies, asked Hirschenhauser. What are the problems from their point of view? 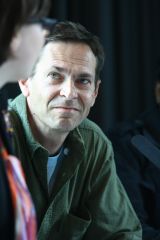 Baumschlager said that Last fm does not have a problem with them as such. It is the whole situation: “The Antitrust-directive sort of ended the monopoly, what made it much more difficult for services like last fm.” At the moment they have to pay six different collecting societies and that is only one of many countries. „So it gets a bit messy“, he laughed. But that´s not the only problem: „The collecting societies are not even sure about their repertoires; sometimes you get a second one claiming the same right.“

„So is the copyright strong enough to meet the online market?“ Hirschenhauser asked.

Baumschlager generally thinks that the law needs to be easier transferable and more flexible. Ranasinghe has the same opinion: More flexibility is needed in the marketplace. „It always seems to be rather black or white, when it comes to copyright issues“, he said. „Artists need to make their online-presence as fluid a possible, cause sometimes there is pretty much work to do for the average musicians to make their music available in the internet“, Baumschlager added. „The Collecting Societies need to deal with the shades of grey between violation and fair use.”

After that Lehtinen brought up a very interesting topic: „It is more a problem of attitude than a problem of the times we live in“, she said. „People don´t feel the value of music anymore. It has become sort of a Jedermanns Recht.“ During a huge law-case in Sweden about pirating music, she told, the legal online-sales went up for ten percent, what many interpreted as a logical consequence. But had it really to do with the case? Not necessarily.

So the right exists, but it is difficult to implement, Hirschenhauser argued.
Shouldn´t we as a matter of fact find ways to find implement the right? Isn´t there a big discrepancy between deciding to make your own rights as an author available and the good will you depend on to get paid fort the use of your work?

As an answer Baumschlager told about creative commons and the fact that some artists are happy when their music is spreaded for free. But where are the boundaries of such a free use, Hirschenhauser asked. Where does the artist stop feeling happy about it? “When Coca Cola uses it freely”, Baumschlager replied spontaneously.

Ranasinghe pointed out that we cannot do anything about the attitude that has changed. „People can get what they want. First of all that’s´ good, and there is no way to make a step back. So the only solution can be: Technology is responsible, so it has to work on options.” And to end with a prejudice: people are buying digital music and there is a possibility dealing with the artist directly – that is a very good outcast. Lehtinen sees the big companies responsible. They earned much money and missed important changes, she said. All of the participants concordantly saw the fact that musicians can be nearer to their fans nowadays as an improvement.

But without any middlemen – could this concept work for artists that are not well known, wanted Hirschenhauser to know.

Baumschlager said that this is exactly what his company is based on. Ranasinghe judged it differently: at Topsin they have artists like Eminem, but newcomer as well. For the newcomers he brought the example of Fanfarlo, a band, which first album was highly crtitically acclaimed, but had no bigger success except that artists like Sigur Ros and David Bowie declared themselves as fans. So the band signed a manager, who came up with the idea to sell the album for only one dollar. In addition to that certain marketing-tools were implemented. Further Sigur Ros helped them by recommending their album. Amazing 30% of the so contacted fans finally bought the album. The thing is, Ranasinghe said: Not the 10.000 dollars earned by the purchases, but the 10.000 credit card-adresses and a sold out us-tour were the real assets. How does topspin make a living, Hirschenhauser wanted to know from Baumschlager. „From 20 to 5 percent based on the size of the transaction“, he replied.

Do artists depend on the good will of consumers, Hirschenhauser wanted to know from now the participants.

Lehtinen neglected. The power came back to the people, she said. They can decide if they give their rights away or not. In the past artists have been very dependent. And instead of starting their own business companies started DRM, when downloads increased, what provoked even more piracy. “The only way to embrace is to meet halfway and to give freedom of choice”, Baumschlager added. Ranasinghe summed up that not the copyright is the problem, but enforcing it.

In addition to that Hirschenhauser asked, if the right gives people the tools to make a living out of their artistic efforts, especially when you have done a song, which is downloaded already by the consumers.

„Music is freely accessible, If you find yourself in a situation like that, you gotta find the people and connect with them. The only way of making money is to get other people get interested in your music and start a way of legally getting money out of it.”

Are collecting societies not fit for 2.0, asked Hirschenhauser. “No, but it takes time to develop, said Lehtinen. Baumschlager saw that differently: The collecting societies did not know how to deal with the new business models for a few years. There is a strong need to adopt many things. And he again brought the example of the fax-incident.

Would it be possible for the people go to their collecting societies and demand  the implementation of new models, wanted Hirschenhauser to know now.

In Finland decisions need to be made with the labels, Lehtinen tells. The majority of labels think the same way as the artists, but what she is really afraid of is that any right that you source out of the collecting societies gets back to emi, warner or any other big group, what will turn out to be not good for the artists anyway.

At the end of an interesting discussion Alex Hirschenhauser asked for a final statement from the participants.

Stefan Baumschlager wants the law to be more efficient, more flexible and fluid and easier to administer. At the same time he thinks it to be quite utopian to geht there, because it is tricky to turn sometthing very paper-based into something else: to sort the buerocratic mess out will in bis opinion take a lot of time.
He and his business partners have active discussions with all the societies and would therefore be happy about more efficient ways to deal with it.

Ranasinghe repeats that the only way of making money is to get other people get interested in your music and start a way of legally getting money out of it. Law has to flexibly support that model.

Kehtinen sees the power already with the people. So the problem is to a small part also one with the attitude of artists. They have to make use of their power. For a fair situation also changes in the legislations have to be made, especially some sort of right for equal remunerations. She would like to see some fairness coming from the laws as well.
Markus Deisenberger

The whole discussion on audio: Copyright 2.0