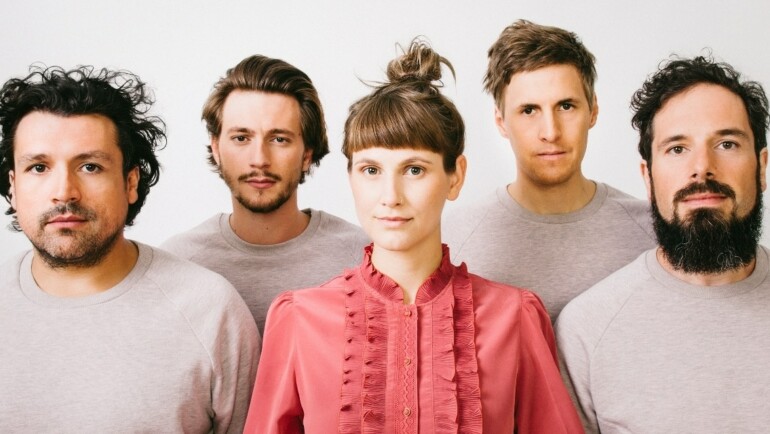 Always further into life and music

Synthpop, Montaigne and the volatility of being: Listen To Leena have written a multi-faceted second album, “Pendulum”, which will be released in October – we (FM4) have exclusive audio samples and the new video for the single “Slow Motion” for you – our FM4 soundpark act in July.

The French thinker and writer Michel de Montaigne (*1533) was one of the first to take the liberty and subtlety to depict the world in his writings as he saw it – and not as it has been brought to him through books, thereby co-founding a new genre in literature; many bloggers of today are unwittingly maintaining his legacy.

Listen To Leena, especially the singer and songwriter of the band, is fascinated by Montaigne and his egocentricity, but also by his courage. There is one particular quote that has primarily inspired the band’s new, second album called “Pendulum”: “The world is nothing but eternal ups and downs. Everything in it staggers and swings incessantly. Even permanence is merely a slowed down rocking. I do not describe being, but rather being on the road.”

The pendulum that always deflects and never stops; the world that keeps spinning, whether tears are shed, for joy, love or suffering; the eternal movement, the beautiful chaos that Listen To Leena intended not only in content but also in sound. But in order to be able to evaluate the whole creative power of their second creation, one has to look back briefly at the beginning of the quintet.

The five musicians behind Listen To Leena, Lucia Leena, Jakob Mayr, Simon Raab, Felipe Ramos and Andreas Senn, studied together at the Jazz Institute of Bruckner University in Linz. That is where they get to know each other, where the band slowly formed. Initially in a smaller formation until recently taking on its current five-piece existance.

The question arises as to what effect classical jazz studies have on pop music which Listen To Leena are now writing. The answer comes accompanied with almost resounding laughter: “The longer I studied, acquired music academically, the more I noticed – that doesn’t interest me like this”. Lucia Leena wants to capture states of life, her life, in words and then in music, not more, but also not less.

In 2014 the debut album “White Elephants” was released. The instruments are clearly in the foreground, clearly marked by the instruments, the arrangements often minimalist, the more unobtrusive, the finer. The approach to their second album was completely different.

Changes in life and writing

The concept behind “Pendulum”, the idea of the constant movement that surrounds us, is not only a beautifully philosophical approach. Lucia Leena integrates her personal preferences even more than before. Especially in the recording process of the second album: “One intention, before I started writing the new songs, was they had to be danceable. I want to be able to dance to them because I discovered dancing for myself quite late, and in my private life now I also listen to much more music in that direction.”

How should music work if it does not come from within the person who writes it; one gladly follows Lucia Leena into the dance studio around the corner of her rented apartment in New Orleans, where she was more or less stranded by chance for several weeks, without purpose, without a goal, pure luxury, simply equipped with time to wander, marvel and write.
Lucia Leena then returned to Austria with “qualitatively rather lousy demos, recorded on a detuned guitar”. Her five band members play on it, and afterwards it seems to her as if they had written the songs together, even if this is not entirely true.

In the rehearsal room as well as in the studio a new kind of collective emerged. Producer Herbert Pirker became a kind of sixth band member, and together Listen To Leena develop a new idea of the place that their music is supposed to be.

If the debut album was reduced, “Pendulum” is pompous; it’s voluminous synth pop, multi-layered like a glittering collage of different, partly classical, partly newly invented sounds. You can make a game of asking the number of channels on any of their tracks. It’s an unmanageable amount; “Often I myself feel like this: Is this an army of trombones now? Are these effective toms? We changed these elements in the studio, but especially in postproduction, so much that we could no longer differentiate between individual instrumental tracks. In the end it’s not really important. It’s all about the sound that comes out in the end.”

What’s there in the end is a wave, sugar syrup and hydrochloric acid, the high cheering and the deep sigh; this wave of tastes and feelings is perfectly bundled in the opening song “Slow Motion”, probably also the best of the whole album.

The intro trots along, it is so short, and yet feels so long, it unfolds and breaks out almost directly into the chorus. The fact that this piece is about passion and sensuality serves the cause; in the video embodied by a woman going through her morning routine, she eats her cereal. Little by little she renounces the cutlery, the good manners; she grabs the slush of milk and oats. The moment she leaves everyday life and surrenders to what she sees, feels and tastes. “On the one hand it is about the sensuality that arises between two people, a passionate moment. But even more relevant for the video is the sensuality as a possibility to break out of the routine of everyday life, because especially in these routines one is cut off from one’s own senses, one no longer perceives anything directly. “Slow motion” is our offer for an escape route.”

“Invisible” for example also feels to be a similar song. One that rolls over you, on heavy keys, the guitar also moved to the foreground, everything faster, “I follow the beat”. It is the search for the new, also on “Something New”, and at the same time the sad knowledge that you can’t go back, you hear a person singing here who is happy but still searching for the meaning of life, and that’s Lucia Leena: “I like to be positive, I like to approach things positively, but I also want to ask questions, and I demand answers.”

In the course of July FM4 presents two more songs on FM4 radio alongside the already released singles “Will I?” and “Slow Motion”: The first one is the previously mentioned “Something New”, the second includes a very special guest: Willi Resetarits, whom Listen To Leena met at a Sunday concert series at Le Meridien in Vienna presenting young artists. On “Her Way” Willi Resetarits performs not just live but also on the album version, the harmonica.

The next challenge for Listen To Leena will be to forge the densely arranged album into a live set: “The record lives from its collage-like character, from the complexity. The live version will have to live from something else, from energy, from what we can give as five musicians. We have five pairs of hands and five pairs of feet, what we can accomplish with them, we will, and what not, won’t be missed”.

The conviction evident in such sentences during the interview makes doubts almost impossible.

by Lisa Schneider (translated from the German article by David Dempsey