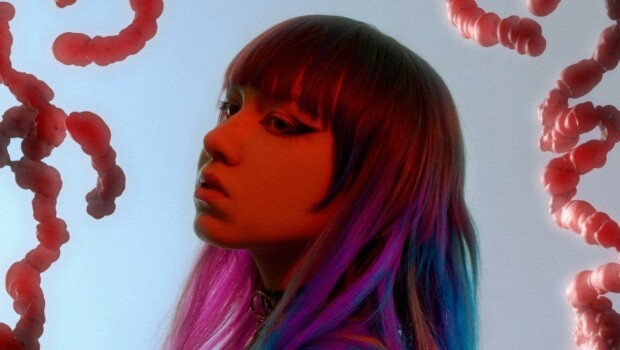 Summer and rave, that goes well together. ANTHEA writes top class hyper-pop and is therefore the FM4 Soundpark Act in June.

I’ll Be My Own Sugar Mom

Good musicians are also often good storytellers. The Viennese musician ANTHEA has built her first EP on the principle of narrative songwriting: XEA is a fictional, non-binary person who slips into different roles and places, as well as narrates the whole affair. There are creepy characters, lovers, lost souls and outsiders in a weird, colorful and shrill world. They are especially enticing because these stories are about emancipation, and a pinch of “fuck off” is included.

Anthea Schranz has been releasing music under the name ANTHEA since last year. Refreshingly, her hyper-pop sounds like nothing else that can be found on the Austrian release radar at the moment.

Claire Elise Boucher and the charts

“I love Grimes,” ANTHEA tells us, and yes, there’s a glint of passion in her eyes. “I think she’s a very inspiring person, really exciting as a character, and her choice of partner is also very interesting.” (Short smirk. That’s diplomacy.) “She’s a good person to engage with because you can constantly discover new things about her.” The Grimes comparison came up immediately with the first singles ANTHEA released last year. It didn’t come out of nowhere, either, with her emo chic and the grotesque, techno pop songs that can definitely be sensory overload, in a good way. But the most exciting thing about Grimes’ music is that she packs so many musical thoughts into one song, that others don’t manage to get down on paper over the span of their entire careers. The comparison makes sense in ANTHEA’s case.

In the FM4 studio, we briefly scroll through her Spotify playlist, and it quickly becomes clear who the conversation is supposed to be about: Charli XCX and Dua Lipa. “I love you forever,” ANTHEA recently posted on Instagram next to a cover photo of Charli. “Her album ‘How I’m Feeling Now’ was the one she released during the first lockdown, and that’s where I fell in. I find it extremely inspiring and beautiful how pop can be something like that, which is not generic at all, but thoughtful and exciting in so many ways – simply genius!” Grimes and Charli XCX, as well as Dua Lipa, are very successful pop stars who use their music to spur new thinking on the topic of “mainstream.” How much experimentation can the chart industry take? On albums like “Art Angels” or “How I’m Feeling Now” you can find some very good answers.

And how much of ANTHEA can the FM4 charts take?

A lot. Her single “S.P.A.M.” released this year got her the first place, the current single “XEA” the second. The surprise was big. “I heard all my childhood and youth that I can’t sing and not to do it. I had piano lessons for six years, but I just memorized everything and didn’t retain anything.” It wasn’t until she was 18 that ANTHEA started, as she says, “to be on the nerd side,” doing research and then immediately using the ideas for her artistic work. ANTHEA was admitted to the University of Applied Arts in Vienna at the age of 17 and studied photography, painting and sculpture.

“Then when I was 23 years old, I decided: Enough is enough. It’s just not the right thing to do.” In the meantime, ANTHEA sees herself in the curatorial position as far as art is concerned – for example, when it comes to her music videos or her press photos. ANTHEA’s entire visual presence, from press photos to music videos, is based on a strong aesthetic concept that she develops with a collaborative team. “The craft is outsourced,” but the ideas come from her. And they come, literally, in dreams: “I try to implement the images I get in my dreams. In the past I sometimes even dreamed works of art before I actually executed them. With music, that hasn’t happened to me yet,” ANTHEA adds with a laugh – the fantastic, surreal, otherworldly is nevertheless an important part of her music.

The song “Reaper,” for example, is an eerily beautiful musical fairy tale with a quirky folk melody that should appeal to American producer and musician Eartheater. Words like “enchanted forest,” “thoughts of escape” or “intense atmosphere” come up in the interview when we discuss the song, and once again the idea of using it to push open a door to another world. It may not necessarily be the better one, but one in which young women in particular also take what is rightfully theirs. “The young girl in the song has lost people and is struggling to get them back. But she then comes to terms with the fact that that’s not possible and comes out of it all even stronger.”

ANTHEA is writing new material and was also just in the studio with two other acclaimed Viennese figures: FARCE and Sakura. The anticipation is very high, even if the release date is not yet fixed. We also have to wait for an exact date in the case of ANTHEA’s first EP, which will be titled “XEA”. Apparently, summertime is looking likely.

In any case, ANTHEA’s new single “Genesis” was released on June 11th. It has nothing to do with Phil Collins and is the summer hit you’ve been waiting for.

Translated by Arianna Fleur from the German original published on June 1st, 2021