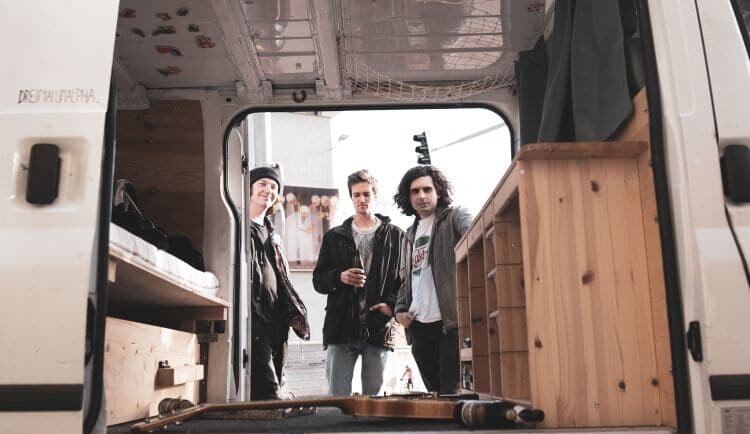 There’s news in the west: the guitar-heavy indie-pop band Dreimalumalpha from Innsbruck, for example. With their debut album “Jugend ans Geld verloren,” the trio is our FM4 Soundpark Act of December.

“A songwriting process is always an output, it’s like expressionistic painting: someone slaps paint on the wall and smears all over it. And that’s a good thing,” says Simon Rogina in an FM4 interview. When the singer and guitarist of Dreimalumalpha talks about the band’s creative process, it’s often about breaking out or bursting out, in any case about expression and about authenticity. As a band, Dreimalumalpha have been on the road since 2017, but for Simon Rogina the course had been set for a joint music project quite some time before. “I made up songs on the guitar and wrote lyrics over and over again. Over time, I then really challenged my friends who were also making music: ‘We have to do something, because you’re good at this and I’m good at that, this has to be made into something!'” Dreimalumalpha emerged from this need, at first a quartet, then with the current line-up, with Simon Rogina, Johannes Hahmann and Thomas Krug.

When it comes to sound, Dreimalumalpha are often compared to the Hamburg School, to bands like Tocotronic or Tomte, with real good German-language indie pop. When talking about musical influences, however, other artists are mentioned in the interview: The Smiths guitar player Johnny Marr, Neil Young, Bob Dylan, the early Brit-Pop era. The Dreimalumalpha sound, inspired by them, is basically nurtured by electric guitar, bass and drums – but for the band, the resulting indie rock has its origins in songwriting. One could hear that first on their EP “Bleib Zurück” from 2018. Now it’s time for their first long-player.

Dreimalumalpha’s debut is called “Jugend ans Geld verloren” – a striking title that resonates with a fair amount of criticism of capitalism: “As a young person, you try not to grow into what you detested in your parents, but then you realize that you’ve already been in it for a long time,” says Thomas Krug. “It’s like a disease that people are willing to trade their euphoria and passion for hobbies or activities for the sake of earning money,” adds Simon Rogina. As an antithesis to performance society, Dreimalumalpha invite you with their music to dream, to build castles in the air and tear them down again, to eat icecream early in the morning, as in the precursor of the album, the single “Zu Besuch”. With it Dreimalumalpha stumbled into the FM4 charts, with wonderful lyrics like “Du bist ein Ausnahmetalent in Sachen Freizeitgestaltung” and a light catchy-tune attitude they made it to number 12. Dreimalumalpha welcomed that with a toast: “First we all drank a glass of ‘Essacher Luft’ – that’s an extremely hot schnapps, just incredibly hot!“ 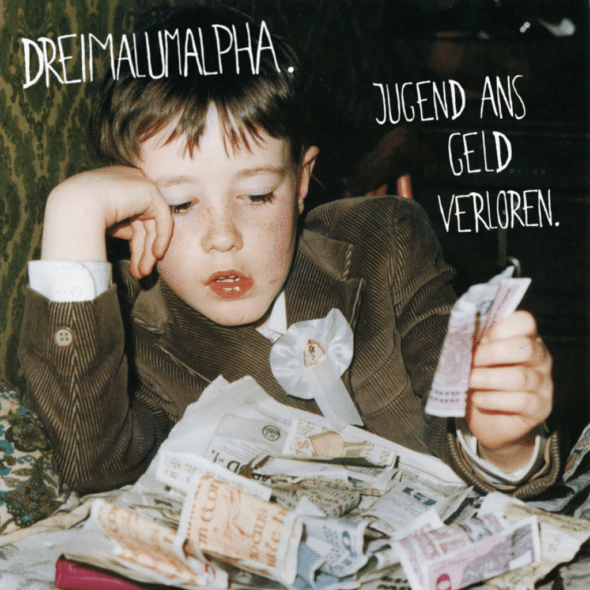 In a subtle way

“Zu Besuch” is a good example of pop songs à la Dreimalumalpha: It’s music that radiates something pleasantly trivial with its lightness, but when you read between the lines and listen more closely, then the serious topics, the big picture, also come to the fore. Irritating words like “revolution” do not only occur in “Zu Besuch”, but also in “Ohne Theorie keine Revolution”, where rebellion is philosophized about. If Dreimalumalpha could choose a revolution, it would be an educational revolution. “We could prevent quite a lot of nonsense with that in the future, if all potentials were encouraged.”

“Sad faces / are for sure / a fundamental benchmark / of the system’s condition.”

(“Without Theory No Revolution”)

In between more serious tones, the carousel is also going round and round on this debut album (“Am Karussell von Ingo Blaumann”), John Lennon’s “Julia” is quoted very melodically (“Alles was groß ist”) and jokes are made about the 4-chord progressions of the pop world (“En ander woor voor akoord”). Nevertheless, a socio-political critical note resonates throughout the album: “Of course, we are also sensing a disposition towards violence and hatred. Hatred in written form, hatred on the net, for example,” says Simon Rogina in the interview. How does the band respond to this hatred? With songs like “Was ist da bloß los,” in which the chorus reads, “What’s wrong with your love?” Would Dreimalumalpha call themselves a political band? “We are certainly not political in an offensive way, but if you listen, you’ll notice that we are for human rights, for a loving relationship with each other! And that is already politics.”