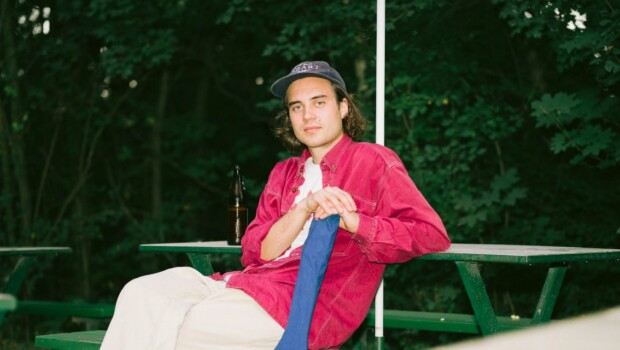 It’s October and autumn’s soundtrack is the EP “For You To Hide” by Viennese musician Earl Mobley. A haven for introverted souls.

He’s already known from groups like Vague or Sluff, the musician Konstantin Heidler, who has now released his first EP as Earl Mobley. On the record’s cover one can see a fort made of sheets and blankets, a fragile but comfortable space that Earl Mobley has created for us: “For You To Hide” is the name of the EP.

Seven songs are on the record, which actually hardly fit together and thus give a coherent picture of Earl Mobley’s musical education. Coming clearly from the world of guitar, he also likes to try out beats and hip hop elements, throwing elements of jazz, funk and soul in as well. The instrumentation ranges from Hammond organ to saxophone, the latter having a prominent role in the only instrumental track “It’s always snowing around me”.

The pseudonym chosen by Konstantin Heidler comes from a Helge Schneider movie, and Schneider is not only a gifted comedian, but first and foremost a gifted musician and just like Earl Mobley a jack-of-all-trades. Humor too is not neglected in Heidler’s work: the song “The Barrell” quotes Beethoven’s Fifth, not directly inspired by the original, but by a scene from The Simpsons in which Nelson is laughing out loud the four epic notes: ha ha ha ha.

„For You To Hide“ by Earl Mobley has been released on the Viennese label Siluh Records.

Cuddling as a drug

In the single “The night’s alright” the lyrical ego – which to a large extent overlaps with Heidler the person  – observes how public space becomes a field of experimentation at night. Participation is secondary; it’s a song for introverted souls that drift away in the party flow, on the dance floors and streets of the city.

The night is also a place from which Earl Mobley draws inspiration, and it was sad for him when nightlife almost came to a standstill this year. To enjoy and play live music is what the young musician is missing. But there were old hobbies to be rediscovered: walking, sometimes freely, sometimes to get rid of negative feelings, as he describes it in the song “Walk it off”.

And when you are back home after long walks, the last song comes just in time: “Cuddle Me” with a sound and mood similar to the Velvet Underground. “Body heat – I feel complete”, they say. That’s one way to get through the pandemic autumn.

Earl Mobley is not interested in playing music to make a career. It has to happen organically, only then the joy of doing it will be preserved, he says. Earl Mobley doesn’t think much either of teasing a new release on social media over months. Where would the surprise be, the moment of discovery, the special thing about it?

There’s no elaborate plan as to when there will be any new music to come from Earl Mobley, and anyway there shouldn’t be any. And when another EP or album sees the light of day after all, then it will hopefully be “like when you find a beautiful stone”, which you put in your pocket and take home with you, to the mattress fort.