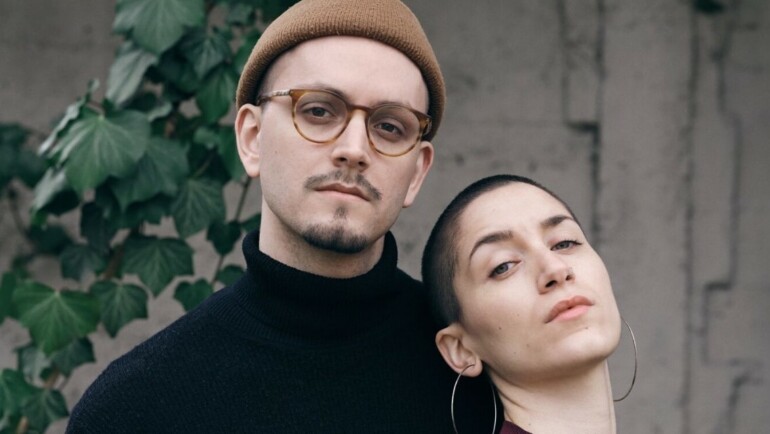 What do you really want in life? This is the question the Austrian duo Elis Noa asks itself and packs these issues into beautiful, reduced and soulful pop songs. Elis Noa is therefore our FM4 Soundpark Act of the month of August.

A beguiling voice, atmospheric sound surfaces, piano sounds that appear out of nowhere, until finally timidly soft beats push themselves under the synthesizers. It is almost heartbreakingly beautiful how Elisa Godino’s soft vocals spiral upwards in the (supposed) chorus of “Love Letter”. Together with musician and producer Aaron Hader, Elis Noa already laid the foundation for their excellent concept debut album last year which is now finally being released – in mid-August – delayed by the coronavirus crisis.

If Elisa sings “I didn’t know what I desire or maybe I was trying to hide it”, the whole opus “What Do You Desire?” is about one of the most important and complex questions in life. What do I really want?

Elisa and Aaron met at the conservatory – when the dinosaurs were still on earth, as Elisa jokingly says. Actually, both accused each other of having “stolen” the other’s rehearsal room. This small initial friction soon turned into a love for making music and experimenting together. But it took some time until the two of them really found each other, musically speaking. In the meantime, as a quintet, the two musicians focused entirely on the stories they want to tell with their songs. While in the past “the cool production idea” was sometimes in the foreground, Elisa has a much clearer feeling about the songs and the lyrics now.

At the beginning of the story which is told on the debut album, Elisa addresses her muse, a certain person, in a calm and insistent way. She tries to take away her muse’s fear in order to ask her the crucial question: “What do you desire?” This prelude leads to the first track “Nude” in which Elisa lets us take a deep look into her soul. She’s still attached to a person, but now no longer wants to hide her feelings. No more lies, honesty and clear announcements are transported here in an urgent, reduced, pumping pop song.

It is a multi-layered question that runs like a thread through the whole album on different levels and creates a beautiful narrative arc.

From the initial feeling that something is wrong, to the will to change something and also to confront the person opposite with it. All the facets that can develop during relationships come into play. From doubt to jealousy and even anger.

One song that reflects this emotional complexity is “Still Nothing (Goddam)”. With its rolling beats, the catchy chorus where several layers of harmony are superimposed on each other, which then merges back into the reduced verse, the track is a good example of how a production can leave a lot of space for the story and the tones and still create a dense atmosphere. Visually, this piece is once again brilliantly realized by director Rupert Höller, who skilfully breaks up the beautiful images with small irritations.

Out of hiding with Future-Pop

Elis Noa open the space for introspection with their album “What Do You Desire?”

Elisa’s sensitive, poetic and honest lyrics hold up a mirror to you and can make you ask yourself these sometimes unpleasant questions. Do I find it okay how my life is going? Am I doing a job that is fulfilling to me? Do I feel comfortable in my relationships and am I honest with myself and my fellow human beings?

Behind this blunt and honest concept album lies certainly also the motivation to no longer want to hide yet express one’s needs, as becomes clear with the song “Hideaway”. If you face these questions and realize that you want to change some things, this can also lead to having fears. So it takes a lot of courage to admit your feelings to yourself and others, and trust that in the long run this can change interpersonal relationships for the better.

It is precisely this reduced turn that creates the magic and the strength of Elis Noa’s album. It does not take much to be captivated by the voice, the sounds and the chords. The hypnotic future-pop song also carries a portion of hope in it, to wage a new beginning. “What Do You Desire?”, despite all the thoughtful reflection, manages the feat of celebrating life and above all love, with all its contrasts and the sometimes difficult search for one’s own way,. Thus it also comprises the answer to the question of what one really desires in life, which at different stages is probably always the same: to love and to be loved.