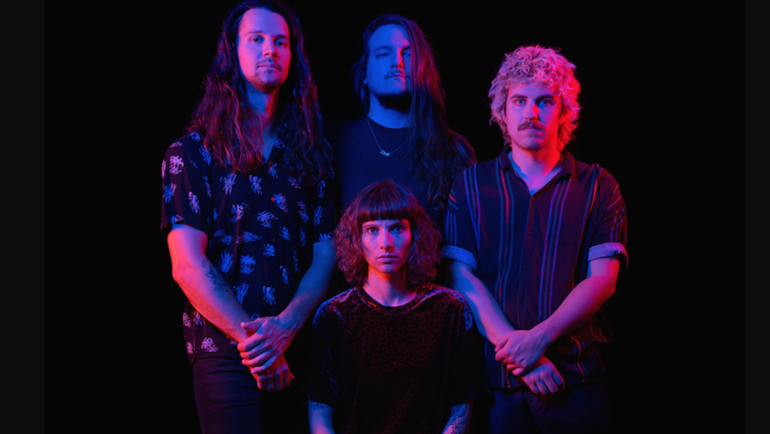 The FM4 Soundpark is a web-platform, community, and radio show for Austrian musicians. Every month, one act is selected to be highlighted both online and on air. The FM4 Soundpark Act of the Month.

There already had been some rumours in the Viennese underground, on stage, the amps had been turned on a long time ago, and the first samples had also been distributed as baits in the worldwide web: The garage band Baits has come together to send driving pop songs out into the world.

Actually, it all started back in 2014, when singer Sonja Maier was still part of her main band at the time, Carousals. Already then, with friends Miguel and Javier Figuerola, they started working on a new project and the foundation for Baits was laid. After the first concerts, Sonja’s colleagues, unfortunately, moved back to Spain, and Christopher Herndler took over on guitar. Several drummers came and went, until drummer and producer Gregor Halsmayer aka Fazo (also known as Deathdeathdeath) joined Baits as next-to-last piece of the puzzle. Finally, after another change, the bass is now being played by Julian Werl, also known from Land of Ooo or his solo project Nichi Mlebom. The story of how the Viennese quartet came to be is a typical fairy tale of the music scene, with many band projects, member changes and discoveries, until everything finally fits, the happy end now being the first long-player “Never Enough”.

Between self-doubt and consumer compulsion

And as good things take time, Baits have invested two full years in their debut album, with a lot of sweat, attention to detail, dedication and ambition. On their very busy Instagram account, Baits compare the album’s creation to a pregnancy: “It really felt like that – you’re constantly busy with it, you’re trying to make things better and you’re carrying that around with you, it’s always there,” Sonja Maier says in the interview.

An album’s creation like an elephant’s pregnancy: they too are pregnant with their offspring for 22 months. In the end, a new baby beckons for Baits, and redemption for all perfectionist band members. What the labor room is to expecting mothers in the conventional sense, the studio LW Sonics in Vienna is to Baits, where drummer Fazo works and which can be used not only for a one-off recording session. With him, Baits have also found their trusted producer. The songs for the album were created without any stress regarding time, as a band they can play, try things out, rehearse and finally record in the studio.

“Never Enough” is the great title behind the ten songs on the new album. “You are never woman enough for yourself. We are living with constant self-doubt – especially we artists. This fear, am I even woman enough for what I do? Or are my ideas of what I want to achieve far too absurd anyway?” says Sonja Maier about the idea behind the album title, which is as self-reflective as it is socio-political. “This never having enough describes us as a society in this world. You never have enough of anything! And you always want more.” This can also be applied to songwriting, after all, when is a song ever finished? Always more can be done in the age of laptop producing. We are encountering this self-doubt on “Never Enough” already in the opening track “Coming After Me”, where fears are reaching out with greedy hands, and as a result thereof, a driving rhythm is coming into its own.

Just like fear and doubt that will catch you cold despite your flight instinct and your tactics of elusion, the single’s melody is driving you out of your mind and hides already the band’s great strength. “In love with hooklines” is written promisingly in their Facebook bio, and Baits themselves describe their sound accordingly: “We are making pop music with a particularly high snot factor,” says Sonja Maier smiling, in the interview. The individual Baits members were socialized in the 1990s, which is easily recognizable in their sound. “That simply comes out of us because we grew up with it,” explains Baits guitarist Christoph Herndler. TV was playing “MTV Cribs,” “MTV Headbangers Ball,” the Viva charts and Kurt Cobain during the legendary MTV Unplugged session.

Picking the raisins of sound from their musical socialization, Baits mix them with Californian surf-punk à la Wavves and Fidlar, step properly on the fuzz pedal and create a frayed, energetic kind of garage pop. Sonja Maier’s voice adding the rest to the guitar solos and punchy drums is the final snot factor in Baits’ universe, so to speak. You feel like wanting to grab your Playstation controller and skate through the world of Tony Hawk, pack your best buddies and blow up a house party, with Baits playing in the backyard, and the evening air smelling of beer and a pinch of freedom.

The liberating blow comes with the latest single: “Liberate You” sounds at first glance like a collective call, a battle cry for rebellion. But the shackles of social norms and roles can only be broken by oneself, as Sonja Maier explains: “For me, the song is about self-liberation from conditioning, ideas, things that are imposed on us from a very young age until now, and actually all the time! It’s about becoming aware of that yourself and then trying to free yourself, by fighting it.”

While the good news of self-awareness and great freedom are conveyed in the chorus, the electric guitar riff adds to the band’s formula for success. The hook line fits like a glove and as long as Baits is having fun, we can be sure it will be around in the future. “The most important thing for us about music is that something remains, and actually, these are hook lines that stick in your head. Of course, there’s the argument that you’ll eventually get sick of them, but as long as it’s fun for us to write cool lines, that’s what we’ll do.”