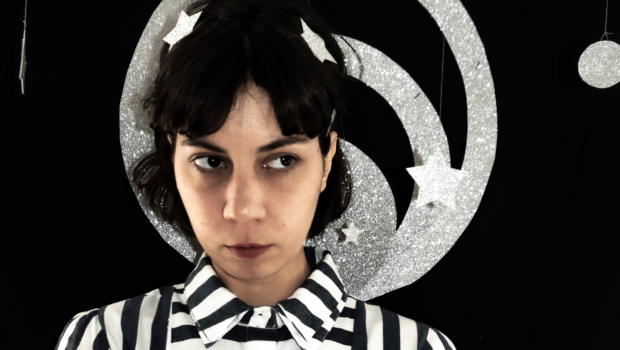 Viennese artist MONSTERHEART has released a new album on January 1st 2021. Appropriately called “The New”, the album’s central themes are change, development and hope for the future. In this interview, musician ANNA ATTAR reveals more about the change that she has gone through personally and talks about (not) growing up and her new-found love for humans in general.

Your new album, “The New” is number 1 in the charts! – At least in the Austrian Indie Charts (as of KW3). In interesting company too: after you, there are Paul McCartney, The White Stripes, and more old white men. What do you say?

ANNA ATTAR (laughs): Yes, it’s quite random. I was very happy, I thought it was very funny, especially because it kind of doesn’t really make sense. But I’m still happy of course.

You used to have a tendency to not necessarily represent a human perspective in your songs, but to let all kinds of creatures speak. It’s different on this album, isn’t it? How did that happen?

ANNA ATTAR: Yes, that has changed. MONSTERHEART is actually already 10 years old and, in the beginning, it was a childlike fantasy concept for me. I always wanted to do songs with characters, but, as a person, I evolved in the meantime. That was my inner world back then. Now, I think I’ve become more open and that’s why this human perspective is a little more my thing. I also have a lot more contact to people now. I used to spend a lot of time at cemeteries and in my head, and now I’m more among people.

ANNA ATTAR: Yes! Much more. As a child, I watched a lot of documentaries like “Universum”, and people were always so unfair because they didn’t intervene in animal documentaries when something happened to the animals. I was very young then. I think this is the reason why I built this inner wall to protect me from people. But now I think to myself, it’s just nature.

Nature is nature and people are also somehow okay. And people can be nice, sometimes.

ANNA ATTAR: Yes (laughs). By now, I think people are very important. In fact, the most important thing in my life. Growing up and stuff.

Yes? Are you an adult now?

ANNA ATTAR: More than I used to be, maybe. I think the truth is that nobody is really grown up, it’s just an old construct. What does adulthood and growing up even mean? I have a child and a husband, but I still don’t have the feeling that I’ve arrived now. Life is just development; you never arrive anywhere, anyway. Maybe I was just never a kid either, who knows?!

Maybe you’ve always been an adult!

Are you proud of your development? Musically and personally?

ANNA ATTAR: Yes. Yeah I’m very proud. I also work a lot on it, but I’ve just developed a lot. I’ve been a pretty anti-social person and now, I’m very social and that’s an important change. Everything is different somehow.

But different in a good way.

What role doe the macabre and death play now?

ANNA ATTAR: Still a big part. But different. It’s become more of a consciousness. It’s less about talking about it in concrete terms, in the sense of “death is everywhere yadda yadda”, but rather it goes in the direction of “seize the day, make the best of it, be positive”. For me, that is somehow the result of dealing with death so consciously, I’m simply grateful. And that has also influenced the new album. Even if I’m writing songs that are a little darker, again. That’s just the cycle of life.

“Put a dress on and feel welcome” is a line from the title track of your new album “The New”. Why a dress?

ANNA ATTAR: The point was this man/woman thing and that women wear pants, but men hardly ever wear dresses, at least in our culture. And for me, it is a symbol to get rid of these binary man/woman things and these norms. A dress makes you feel free, so “put a dress on and feel welcome”.

There are some song titles on the album that are made up of abbreviations – EOTW, LIP and KY – what is that all about?

ANNA ATTAR: I think the titles would be too cheesy for me otherwise. So “End of the World” is just too long, but “Kiss You” and “Love is pain” … (laughs). It actually annoys me in the songs as well, but somehow I couldn’t help it. I give the songs their freedom and if they come out like this, then they come out like this. But I just feel a little uncomfortable. I prefer LIP to “Love is pain”.

GO DIE BIG CITY was a long time ago, but back then you were in a collective, then solo and now actually with a band – how was the development?

ANNA ATTAR: I wasn’t alone voluntarily. I have often had people who were on stage with me for 1-2 concerts. In the past, however, I simply produced music in such a way that it was difficult to translate into a band format. Now I purposely used that band sound on the album, that is, drums and guitar. I did that because I finally want to play live with a band. “Translating” my earlier electronic music and adapting it for a band didn’t work so well. But I’ve always wanted a band. Now I think I have the ideal line-up, but we haven’t been able to test it out yet, but I’m really excited.