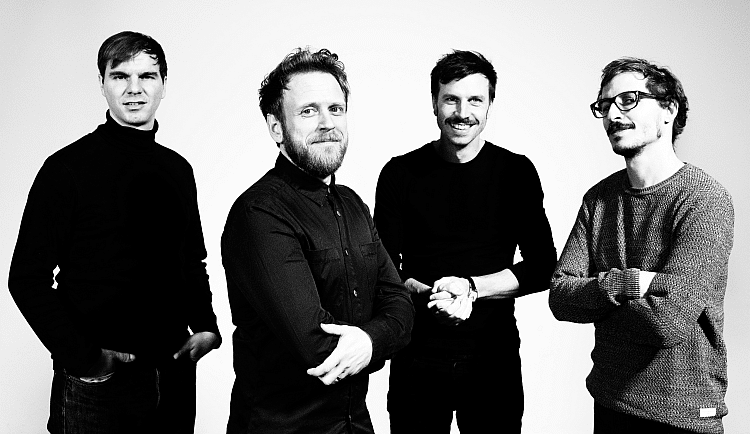 GARISH is certainly one of the best known bands in Austria. They have been making music since 1997, and have managed to stay true to themselves the whole time. Despite this, one obstacle almost tripped them up when they released their album “Trumpf” in 2014. But the band from Burgenland pulled through. Not just that, but now on their new album “Komm schwarzer Kater” (“Come Black Cat”, Ink Music), they are taking their listeners to new musical realms.

No, they aren’t suddenly making hard rock, it’s not that extreme a change. But on “Trumpf” reduction played an important roll, one of the reasons the acoustic guitar was so much in focus on that album. “Komm schwarzer Kater” on the other hand trumps with exciting pop melodies and interesting details that stick with you from the very first listening. But not because the songs are your typical ear-worm.

It has much more to do with the vocal intonation of singer Thomas Jarmer, and the ease with which he can sing through what appears to be two completely unrelated sentences. Or the exceptional use of voices on “Apollo”. It is a duet that isn’t just sung by Jarmer and his female counterpart in a very high register, but it also benefits from the delicate accents of the words which help make it clear which mood should be evoked by this song. It seems like a scene between a man and a woman, a negotiation of love.

And because that song manages so well to create strong images in the minds eye, it is also one of the strongest moments of the album. Even though the musical aspect is somewhat reserved. Another strong song is „Pandoras Box & ein Getränk“, although for completely different reasons. It’s a song that goes straight to your ear, with a light dance touch. You can practically see yourself give in to the song.

THE LYRICS WANT TO BE EXPLORED

And then there is the intonation again. Thomas Jarmer recites the words of the refrain as though they were a poem from Ernst Jandl. That means that it is relatively difficult for a poetry beginner to make sense of the sung words, but for those familiar with other bands that, like Garish, have modelled their style on the Hamburger Schule, their lyrical texts are much easier to come to terms with. For those unfamiliar with the music of bands like Tocotronic, Blumfeld or Die Sterne, it might take some time to realise that not everything sung needs to make immediate sense. “Komm schwarzer Kater” is like a box full of memorabilia, it is an album that provokes discovery. First you unpack the obvious memories like photos and souvenirs, and then later the letters and old documents, eventually taking the time to read them again. Finally it all begins to make sense together.