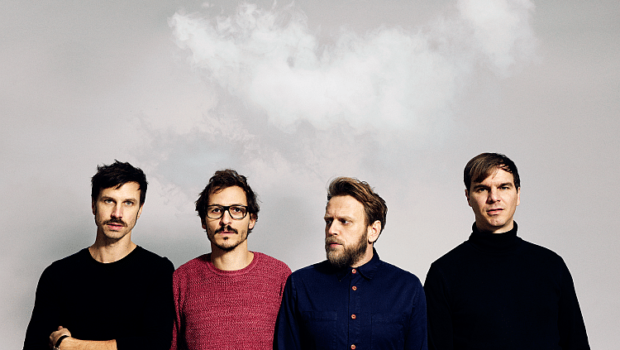 They have been making music for almost 20 years now, and haven’t ever really been thrown off course, despite having faced one or two stumbling blocks in their career. GARISH isn’t just one of the best known Austrian bands, it is almost an institution. Their adoption of the Hamburger School certainly helped make a name for the band in German speaking countries. Their album “Trumpf” that was released in 2014 scored with a very reserved instrumentation and poetic texts. On their new album “Komm schwarzer Kater” (Ink Music, release on 03.02.) the poetry has remained, but the melodies have grown teeth. Anne-Marie Darok spoke with lead singer Thomas Jarmer about difficult times, political participation, and the role-model effect of musicians.

When you compare the musically reductionist album “Trumpf” with the album “Komm schwarzer Kater” it seems like your last album was meant to be a pure party-album. Which vision did you have for this album?

Thomas Jarmer: While it was the appeal of capturing the moment before, with the new songs it was necessary to form them track by track. After a while an ensemble of instruments and sounds crystalized that we played on the entire album. We didn’t have any plan at first, more of an inkling and intuition.

Which came first, the lyrics or the music?

Thomas Jarmer: The beginning is always the music. This time rhythm and pace played a much greater role. Some pieces began with a much more concrete scenario, and others left much more room for a playful approach. In the meantime I have become much more aware of the small details and events which can then spontaneously provide inspiration for the lyrics.

In the video for “Unter Strom” the lyrics play a leading role. Is that a representation of how you consume music, with a strong focus on the lyrics, or did you just want to ground this specific song?

Thomas Jarmer: It’s always different. “Unter Strom” was meant to be a breathing space, the video, as a first taste of the album is accordingly simple and penetrating.

Before your last album “Trumpf” the media was almost shocked to be writing about the fact that the band almost broke up, that as bandmates you were all looking in other directions and only found your way back together at the last minute. How do you look book now on the rumours from that time in 2014?

Thomas Jarmer: The preparations and rehearsals for “Trumpf” took a lot out of us as a band, since in the course of time they became a sort of a choreography of five different egos. A major accomplishment, literally. The conflict as part of this process is nothing unusual in our work together, but for the first time some of us were no longer certain if this ordeal was going to end productively.

We were very convinced of the songs that came out of that time, but couldn’t find the right form for them

Since that album things have gotten quiet around you all when it comes to the media. Have you spent the last two years intensively working on “Komm schwarzer Kater” or did you take a break.

Thomas Jarmer: After “Trumpf” we wanted to get back to new music as quickly as possible. And that is just what happened. We were very sure of the songs that came out of that time, but couldn’t find the right form for them. When we reformed Garish as a quartet, we used that as an opportunity to expand our circles. We turned to Stefan Deisenberger, in whose studio the new album was painstakingly recorded, track by track.

When a band has been in the business as long as you have, do you still feel the same creative pressure as at the beginning, or do you have more freedom to work as you like since you are already established?

Thomas Jarmer: I think, neither-nor. Our expectations of the music, our exchanges with each other, changes with every album. When you have reached the status of an established band, that can also cause the fans to have expectations. We have always, even if subconsciously, ignored that when it came to which direction we were going. And in the end we can’t get out of our own skin.

To be recognised through what is packed into the music has a very timeless value for us.

If you search for the word “Garish” on your homepage, you don’t just find texts about the band and it’s development, but many articles in which the music of other bands is compared to yours, and interviews in which other artists name you as a role model. When did the band first feel that you had influence?

Thomas Jarmer: We don’t really notice it, although it is very flattering, no question. And how does it feel to know that we have created something that has had an influence on other people? To be recognised through what is packed into the music has a very timeless value for us.

Many musicians write lyrics that are critical of society and politics, but never speak up for a particular politician or party. In the presidential election you clearly supported Alexander Van der Bellen. Have you felt any effects from the public for that, wether positive or negative?

Thomas Jarmer: A basic opinion about political subjects doesn’t have to express itself in a party membership. Party politics played no role for us here. For us it was the right time to get involved, because it was also about basic matters that Van der Bellen represented.

What are the most important tips that you could give a band who is just getting started?

Thomas Jarmer: Ah, tips. From the beginning, we were never in a hurry to get anywhere. As long as the moment felt right, it was good. But a catch phrase could be – Inspiration and Originality, in the best case everything else will fall into place.

Which tips do you wish you had been given and which suggestions would you rather not have been given?

Thomas Jarmer: We tried enough on our own and messed up enough, thats how you get the chance to make your own realisations and get your own head out of the noose.

The year 2016 has been pretty unloved, one of the reasons a lot of people are happy it’s finally 2017. What do your plans for the new year look like?

Thomas Jarmer: For us it was an intense, but in the end, good year. Now it’s back on stage in a new constellation and with new music.