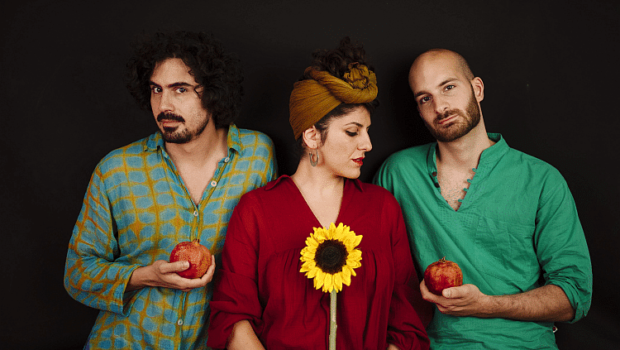 GOLNAR & MAHAN’s debut album “Derakht” (Lotus Records) is a musical experience that gently and beautifully transports you to another distant dimension. One in which GOLNAR & MAHAN create world music of dignified beauty, one that captivates from the very first second.

No, traditional doesn’t always have to sound old-fashioned or dusty. Golnar & Mahan’s new album is an impressive proof that it can also be different. They dress the supposedly old in exciting modern garb and fill it with new life. In the music of Golnar Shahyar (vocals, guitar), Mahan Mirarab (fretless guitar, oud) and Amir Wahba (percussion), the traditional sounds of their homeland, Iran, are combined with western contemporary music, forming a universal language that draws its vocabulary from the music of the Middle East, jazz, folklore singer-songwriting and African rhythms.  It is a music that develops an unblievably warm and pulsing vibe of its own.

MUSIC OF A BEAUTIFUL SOUND

The songs, sung in Farsi and English, unfold a tenderly caressing sentimental mood. They exude soul and paint colourful landscapes. It is almost impossible not to be enthralled by the sound of the trio. Golnar & Mahan give free rein to their passion and playfulness. Rather than the three of them simply playing through their songs, they dance through them, light-footed, gentle, stylish and with a wonderfully seductive tone. The musical stories told on “Derakht” range from the mysterious to the tastefully melancholic. They let you dream and float away, discover the foreign and enjoy the familiar in a new, imaginative sound.

With “Derakht”, Golnar & Mahan have delivered an album that really gets under your skin. Every note exudes a magical attraction, every song is intense, and the whole album just won’t let go of you until the end. Golnar Shahyar, Mahan Mirarab and Amir Wahba’s first work is a true masterpiece, one that will definitely not go unheard due to its extraordinary beautiful and lyrical sound.