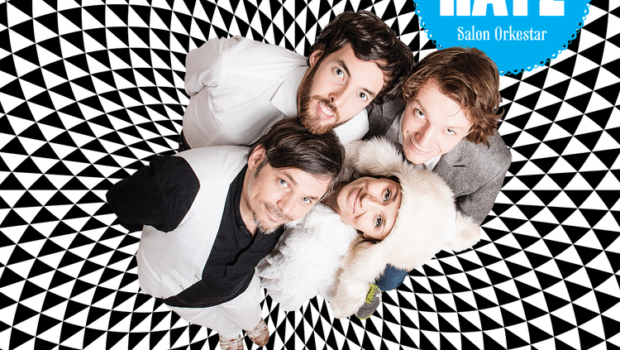 Over the past years the Grossmütterchen Hatz Salon Orkestar has rocketed its way through the international world music scene. In 2011 they caused quite a stir with their debut album “Gallato” and have ever since been able to make a name for themselves at home and abroad. Concerts have already led the ensemble around singer and accordionist Franziska Hatz to numerous foreign countries.

The Grossmütterchen Hatz Salon Orkestar practice the freedom of doing exactly what they feel like doing. The songs by Franziska Hatz and her band colleagues Richie Winkler (saxophone), Simon Schellnegger (viola), Andi Wilding (guitar) and Julian Pieber (percussion) stand for a music concept that is primarily characterized by an immense stylistic diversity. Defying all the alleged traditional boundaries, the five-membered ensemble mixes a musical cocktail, which is composed of ingredients from jazz, Balkan folklore, Viennese song, pop, ska elements, sprinkled with classical music. It is precisely for this reason that this ensemble cannot be pigeonholed into any predefined category.

Likewise, the quintet shows a distinct knack for enhancing their music, melodies and arrangements with vitality and the feeling of spontaneit. The humorous and dynamic light-footedness, which Franziska Hatz and her fellow musicians exhibit is contagious and invites listeners to rise from their seats and put on their dancing shoes. Listening to music of the Grossmütterchen Hatz Salon Orkestar is exhilarating and inspiring, especially because it does not meet the usual conventions and simply conveys vivid joy and energy. And this of course particularly on stage!
Text: Michael Ternai (translated from German)
Photo: Grossmütterchen Hatz Salon Orkestar © Stephan Doleschal