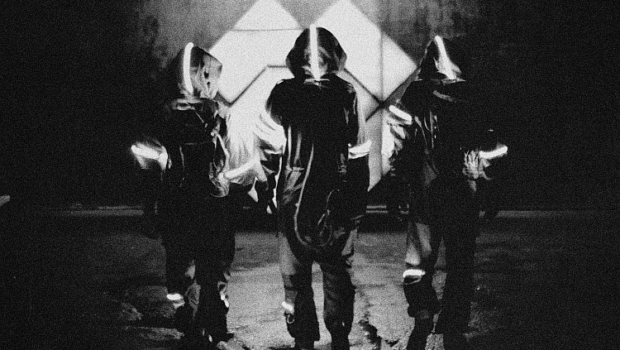 Energy, energy, energy. That would be the only possible short review of the debut album from GUDRUN VON LAXENBURG. The trio, which has been making danceable alternative techno for years now, have finally released their debut album “PANIC!” on Skint/BMG. If there is one thing you can say about this album, it is going to make you sweat.

But not because the sound is so terrible, or the soundscape so eerie. No, when it comes to “PANIC!” you simply won’t be able to stop dancing. And don’t even think about trying to suppress the urge to bob along to the beat.

The songs explode, ruthlessly and incessantly. Take the first single “Revolution”. The song gets off to an easy start, a little like a warm-up session before a workout. You step on to the treadmill and think “This is like a walk in the park…”. And then the speed and resistance start ramping up and next thing you know you find your self in a sweaty trance with no other option than to keep on moving.

PERFECT TUNES FOR THE FITNESS STUDIO

Although this comparison might not say much about the actual music, I have to say that even people who aren’t generally fans of electronica will be able to add this album to their workout playlist. The beats are harsh, but not so much so that they could be described as experimental or cold. They aren’t so deep and bass-heavy that you need to constantly look out for the drop. At the same time the melodies provide the necessary and modern depth. You can’t do that without bass.

The melodies have internalised this driving element. The song carries you away until the last note sounds and you find yourself amazed that four minutes have just gone by. And that drives you to listen to the song over and over again in order to completely experience them.
“Moving Water”, sung by the Swiss-Austrian singer Eloui is one of those songs you can lose yourself in.

Her voice is perfectly framed by a foggy veil of billowing beats. Carefully executed voice effects give the song a translucent, lightly watered down sound. The video for “Moving Water” was justifiably nominated for the Austrian Music Video Prize of the Vienna Shorts film festival. The science fiction setting is perfect for this song.

The interesting mix of danceable beats and creative production has made a name for the band even beyond the borders of the dance scene. “PANIC!” was released on the label Skint that was founded by Fatboy Slim. You can bet that it is going to provide the soundtrack to more than a few sweaty summer nights…