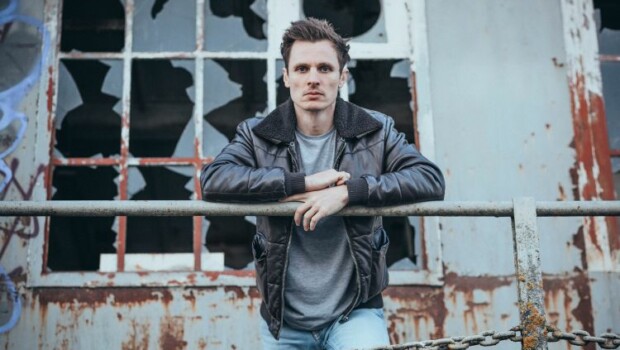 Music that draws its appeal from musical contrasts, on “Atom” – the debut album by Linz-based producer and guitarist Tomá Ivanov aka TOMÁ – electronic music, jazz and pop interweave in a wonderful and manifold way to create a sound that perfectly moves between complaisance and profundity, thus creating distinctively exciting touches. In an interview with Michael Ternai, TOMÁ spoke about the necessity to expand his musical spectrum, about the sound ideas he had for his debut album, and  the central theme running through his songs.

Listening to your album “Atom”, one quickly gets the impression that there really was a lot of work behind it. The music is very diverse and detailed. How challenging was it to create this album?

TOMÁ: It wasn’t that bad. After all, many of the compositions were written in the years before. I just picked them up again for this album. The time required to produce the album was therefore manageable. We began with the recordings in February 2020, during two weeks, then everything was in the can. After that, I finished the production of the recordings over another three months. This rather compact framework is, I think, the right approach for me, because it becomes difficult for me when I’m working on something for too long a time. I then get the feeling that things get lost, because at some point I’m musically already somewhere else. With the album having so many different styles on it, it’s important to get it to sound like it’s all one piece.

Did you compose all the tracks on the album or did some of them just pop up in the production stage?

TOMÁ: It’s actually both. I do have a producer background. But on the other hand, I also have a bit of an academic jazz background. I think writing things down is sometimes an advantage, especially when you’re working with instrumentalists or when the chords you’re using in a song are a bit more complex. Basically, every chord that goes beyond a triad is difficult. That’s why everything has to be written out precisely. In general, I would say that there’s a balance. A lot of tracks came out of the production context, where I experimented a lot with sounds and other things. Other stuff I really wrote out. For example, the tracks that used string sections, like the pieces “Catharsis” with Lou Asril or “French Scene” with Esther Esrah.

The idea I had was to combine these two worlds […]

“Atom” is stylistically a very broad album. Each number musically tells its own story. And yet, there’s an underlying mood throughout: dreamy, floating, yet distinct and sophisticated. When you started working on the album, did you already have an idea of where it was going?

TOMÁ: Yes, I did have a certain idea, because I was also guided by my own musical preferences. I’m also into that lo-fi sound and stuff like that. But at the same time I like denser harmonies and interesting arrangements. The idea I had was to combine these two worlds and to let these denser harmonies merge into a slightly poppier context. Ultimately, my goal was to create pieces that were easy to listen to, but at the same time had a certain depth. After all, the album was not meant to be an exhausting listening experience by any means.

The album does offer some real highlights, such as the number you mentioned, “Catharsis”, sung by Lou Asril, but also “Outsight” with singer Viviane Toebich, who puts on an insane vocal performance, just like Esther Esrah does in her songs. Where did you discover these extraordinary voices?

TOMÁ: I have to say, this kind of thing always falls into place for me quite well. These features  simply happen, always. How I came across Viviane Toebich is actually an interesting story. I once worked in Enns in a cultural center and did some event organization there. Viviane’s parents sat on the board of this association. Through them I got to know Viviane, but without having any idea that she was a singer. But at some point she played with a band in this very location. And when I heard her, I thought that she had real potential. And then I just worked together with her and tried a few things. But that was before the album. She’s still extremely young, so there’s still a lot to come for sure.

To what extent did you write tailor-made compositions for the individual singers?

TOMÁ: “Outsight” I actually wrote for Viviane. When I started composing the song, I already knew it was going to be for Viviane, and in the process I wrote the lyrics as well.

What are the contents of the songs? Is there a certain message behind the lyrics?

TOMÁ: At the beginning there was no real concept, but in the end a lot of things came together well, although I still don’t want to talk about a concept album. But there’s something like a central theme running through it. I gave the album the title “Atom”, an atom being the smallest unit that forms something or into which something can be destroyed. Basically, it boils down to the fact that something new can always emerge from this smallest unit. Therefore I don’t see in such an atomization process anything exclusively negative. This dissolving and growing together again is happening on all levels, whether small or big. You just have to look at the world today, where a kind of reorientation is taking place in many areas.

Ultimately, this album also represents a kind of personal reinvention for me in a certain way. For a long time I was only active in production and the club context, then I was on the road in the jazz field. Now all these different sides of me are coming together on the album, which is also expressed in the lyrics. The songs basically describe the different phases in a personal metamorphosis. “Outsight”, for example, describes a phase in which you are losing yourself and no longer know exactly who you actually are, and only then are finding yourself again. “Wrong” describes a phase in which you consciously decide to go the wrong way.

At some point though, that wasn’t enough for me

What makes your musical career interesting is that you were first a producer of electronic music and started studying jazz quite late. That’s rather rare. Usually it’s the other way round.

TOMÁ: That’s right. The path is rather an atypical one. Normally, at least according to my impression, many musicians first learn an instrument, then compose and maybe start producing at the end. That was indeed different for me: first I produced, then I composed, and only later on began to work more intensively with my instrument again. I’ve always played guitar, but never  in a really disciplined way.

For me, it was mainly the creative part that was interesting in the beginning. I always wanted to have some kind of quick output. That’s why producing was more tempting for me at first. I started producing very early and had some techno projects going. I also did some stuff for other people. At some point though, that wasn’t enough for me. I realized that I couldn’t express myself harmonically as much as I wanted to, and thought I needed to grow and make more progress here. So I decided to leave everything behind for a while and start practising guitar intensively and studying jazz again. That was quite challenging, because it’s quite different to start learning an instrument properly when you’re fifteen than when you’re in your late twenties. But it made sense to do it, as the album now shows. Studying sort of led me to what I wanted to do. I realized that only doing production wasn’t enough for me, just as only playing jazz . In that sense, I found my happiness in building bridges between these two worlds.

What are your next plans? Any idea for a live presentation of the album?

TOMÁ: Yes, I’ve already thought of a concept in this regard – my five-piece band plus features, which will then be variably included, depending on where we play. But as far as concerts are concerned, I don’t have anything concrete yet, because I want to wait and see how it develops. “Atom” is my debut project and people don’t know me yet. I think once the album is out, the conditions will be better for me to get something going. But there’s definitely something coming up and I’m already very much involved in planning a tour.