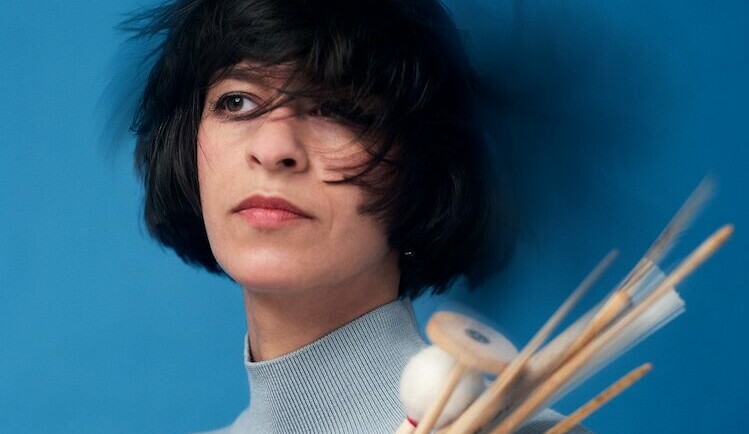 Rhythmic layering, performative playing and wildly forward thinking: the percussionist and visual artist KATHARINA ERNST is this year’s recipient of the State Scholarship for Composition from the Federal Ministry of Arts, Culture, Civil Service and Sport and is Artist in Residence at the upcoming Saalfelden Jazz Festival. In an interview with Sylvia Wendrock, she spoke about high demands, mediating between head and body, and about slaving away, which should always have something pleasurable in it. For yet another look through our Crossways in Contemporary Music series magnifying glass, read on.

How does a percussionist and visual thinker compose? In the work “a : z (expand : contract)“ you are, after all, trying to visualize musical structures through movement.

Katharina Ernst: I am interested in a lot of different things, for example, playing the drums, painting, drawing and choreography, and consequently think, read, work a lot in these spaces. If a subject fascinates me, I then circle around it, like a cyclical work at the moment, trying to think of rhythm as a cycle; a composition, not linear, to always arrive back at the beginning. So my abstract desire is looking for a way, which then perhaps leads to a musical composition; if things internal to the theme, for example, would be well kept in the music. With “expand : contract“ I rather want to visualize musical structures and watch the body performing the music. Related to the cyclical, for example, is the question of whether the performer would play a musical cycle while stopping in one place. Or would one also engage in some form of cyclic movement with this body? There are a lot of possibilities there. In addition, there are things that take on their own form, so they are not for me to decide at all. For example, if I extend a groove into space so that the steps from one drum to the other form the meter, e.g. eighth notes, the paths between the drums may have to be covered at different speeds if the musical spaces between the drums have different lengths. It is such translation processes that I am concerned with when composing. However, not to illustrate them, but rather starting from abstract ideas.

Your means is to structure time, when you superimpose time portions by means of polymetrics. Visual art also often works with superimpositions of different scrolling speeds. But your kind of visualization rather goes into space, doesn’t it?

Katharina Ernst: The answer is usually everything. I’m most satisfied when I can aesthetically arrive at a result I like or am interested in, somehow. I make a lot of drawings in order to understand, and I’m fascinated by how polyrhythms present themselves, namely always as symmetry: if you divide the same sections of time or space among themselves into sequences of different lengths and superimpose them on each other, the result is always a symmetrical structure. That never ceases to impress me. And mapped with drums, it interests me much more than with pencil on paper. The much more difficult realization also forms an incentive for me. Besides, it breaks my own habits. It crosses, so to speak, what a body can get used to. In polyrhythmics, many of these rhythms intentionally run simultaneously, which brings one into a new, different physicality. In the body there are many parallel processes in different cycles anyway, most of them are just not intentional, so they can’t be influenced.

You also think performatively when composing, perform your pieces yourself.

Katharina Ernst: The premise for my compositions is that I have to be able to play it on stage. That is also my framework, otherwise there would be no end to thinking. Besides, it’s the embodiment that interests me – there’s an incredible amount going on in the head, but what’s exciting is the manifestation of these thoughts.

“I HAVE THE SUSPICION THAT THIS IS MY ATTEMPT AT MEDIATION BETWEEN HEAD AND BODY.”

Doesn’t that imply an incredibly high demand on yourself?

Katharina Ernst: I have the suspicion that this is my attempt at mediation between head and body.

Performance itself is, in itself, performative. But you also write for performances, as in the collaboration with Kate McIntosh.

Katharina Ernst: With Kate McIntosh, I actually don’t perform, and I hand over everything after the collaboration with the performers. Of the five performers, only one was a drummer. Nevertheless, they all got a pretty high level of understanding of this rhythmic complexity in an impressively short time. For Central European listeners, I don’t think grasping polyrhythms is that hard to do, most just aren’t challenged.

Are you a numbers person?

Katharina Ernst: I always find connections in number combinations, and that’s satisfying. Polymetrics – the way I do it – is something I have to construct, record, and practice; it doesn’t just land in my lap. The perspective when notating, the determination of the basic units and the definition of the relations to them are totally decisive. Incredibly complex systems emerge, in which I can also lose my way again and again, so that I constantly remain on the verge of understanding and not understanding.

“THERE MUST BE AN ENJOYABLE REASON WHY YOU WORK SO HARD.”

How can you deal with this complexity in your brain?

Katharina Ernst: I like it when my brain is busy in this way, because it generally needs to be stimulated, occupied. When playing polymetrically, I have to stay totally attentive, because all four limbs, hands and feet, and also the different instruments with their different rebounds, have to be taken into account. If it’s not played where it belongs, it doesn’t groove at all and suddenly doesn’t make any sense to me. There has to be an enjoyable reason why you work so hard. Contemporary music is a very clear reference for me, it just can‘t become joyless and humorless. My first solo record “Extrametric” may sound like dance music at first, but the process of making it was more close to new music.

Does it happen sometimes, that your compositions are also played by others?

Katharina Ernst: I have composed specifically for the Black Page Orchestra or Kate McIntosh. But in the meantime there have also been requests to play my solo pieces. Two dancers, for example, really wanted to create a choreography for it and had looked for a drummer because I didn’t have time. I didn‘t expect that.

“THIS LOW THRESHOLD NATURE MAKES IT AN IDEAL AND INSANELY PRODUCTIVE MODEL FOR SOCIAL FORMS.”

You describe polyrhythmics as a consciousness-raising phenomenon, necessary to map simultaneity. This can be read directly on a societal level: You’ve found a set of tools to map this thinking. Isn’t that awesome?

Katharina Ernst: It’s a huge gift. I couldn’t have known that back then, when I started at the age of nine, but somehow I knew how great it was. The percussion instrumentarium, after all, cannot be narrowed down at all in itself; it’s a treasure chest of capabilities. And the world is full of percussion instruments. You can build one out of any piece of junk. This, of course, makes it difficult to control. It is, together with voice, the oldest instrument of mankind; also the easiest to comprehend, virtually anyone can “drum”. This low threshold makes it an ideal and insanely productive model for social forms.

Have you sworn off electroacoustics?

Katharina Ernst: On “le temps” I focused on the reduction of means and cleared the acoustic drums from electronic means, extremely. But that’s not the end of the story; it’s simply a different work, not a linear further development of “Extrametric”. “Le temps” also works via an installative setting. At the beginning, there are widely spaced drums that I play with one and a half meter long mallets. The whole thing then grows together into a drum set that I sit at for the last, most complex piece. Getting there unites a lot and is part of the composition. The music may also be an independent element of that.

So playing live is absolutely part of it for you …

Katharina Ernst: I am also interested in finding forms in which I don’t perform. Composing for ensembles, such as the Black Page Orchestra, was very interesting and enriching for me. This approach is also so close to the visual arts where, again, something is created in the studio on its own that you can look at later and experience how your own composition takes on space. This makes me constantly search for the form because I want to be aesthetically interested and/or touched. There are so many ways to work on so many things, but I want to get a sensually valuable result. It’s important to me that it’s not just cerebral. The cloud wall for “le temps” was just blue paint on white wall, the clouds are actually the negative space, that’s a mind game in itself. “Le temps” means “the time” in French, but also “the weather” – and the weather changes all the time.