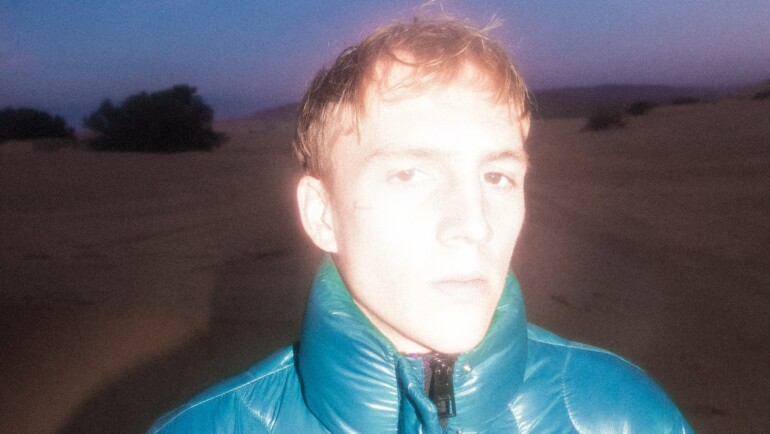 Language is art – at least in the case of APOLLO SISSI. The young musician has released nine songs in the last ten months, yet he has never performed live in front of a large audience as “Apollo Sissi”. Nevertheless, he doesn’t seem to have gotten bored so far: for the search for the perfect video location, he goes hiking for days, uses the Viennese bike paths with passion and is currently working extensively on the release of his debut album, which will be released in May. Katharina Reiffenstuhl met with the Linz native in his studio in Vienna and took a look behind the scenes of the artist and his music.

You are originally from Upper Austria. What’s the music scene like there – how far can you get as a musician?

Apollo Sissi: As far as you want, I think. But Linz has quite a drive. There’s a cool cultural scene. Somehow you get the feeling that everyone there wants to get out, much further and much bigger. But everyone is very supportive. When I first started, I noticed that everyone you meet there who also does hip hop always wants to help and takes you right in. Even if you’re just starting out and you’re on some freestyle cypher, they’re still like, “Nice, you did it!” [laughs] That’s just really cool.

But why did you move to Vienna?

Apollo Sissi: It was simply time. I had the feeling that Linz is now a finished chapter for me and I have to move on.

Apollo Sissi: Vienna is fierce. You can go out a lot more. Or, really, you can go out at all. You can’t really do that in Linz. There’s so little techno there. In Linz you know someone everywhere, that’s not the case here. The fact that there are bike paths everywhere is also one of the best things about Vienna. [laughs] It’s just a very different atmosphere here in the big city than in a small town.

You started a comeback about a year ago and released something with “Partner in Crime” after a long time. Why was there such a long break?

Apollo Sissi: I realized that everything I did when I was younger and at the start of my musical career was more personal learning and not necessarily important for the world. Those beginnings were important for me to learn and figure out what I wanted as an artist and what my direction was. When I realized that, I deleted the stuff I was doing at the time and changed my stage name and made the music I really wanted to make; where my heart was. That used to be the case, of course, but it wasn’t to the point where it was relevant to the world yet.

“THESE BEGINNINGS WERE IMPORTANT FOR ME TO LEARN AND FIND OUT WHAT I WANT AS AN ARTIST AND WHAT MY DIRECTION IS.”

Apollo Sissi: No, actually I always wanted to be a researcher as a child, around the age of five or six. I still think that’s incredibly great, because this constant and lifelong learning is a really cool basic principle. Then I was very interested in climbing for a while, but competitive sports are something else entirely. To be honest, I never really thought about my future and just did what I liked to do. Then music came along. When I was about 17 or 18, I decided that this had to be my profession. Then I did everything for it, invested a lot of energy and time in it and especially started to work with friends who were also artistically active, for example videographers or mixing engineers.

Your debut album is called “Shady & Beautiful”. What does that refer to?

Apollo Sissi: That things can only exist in mutual interrelations. Shade only exists because there is sun. If you don’t know what is beautiful, then you don’t know what is shady. It’s just always mutually dependent. I also have two sketches on the album that illustrate this very exaggeratedly. I had a lot of fun with that. The first part is kind of sweet and beautiful and “good life”, then there’s this hard beat switch where it’s then just the opposite and this shady side is portrayed. There’s also a lot of ecstasy in the album, which has to be followed by periods of calm again.

How long have you been working with lyricism? You really pull out a few masterpieces with your lyrics.

Apollo Sissi: I used to start with poems – that was my first approach to lyrics. But it’s completely different, there are songs that you really bang out, that are finished in half an hour. But then there are also songs that you write for days on end and spend the whole day just making sure that every line fits.

“IN ORDER FOR ME TO EXPRESS WHAT I FEEL INSIDE, I HAVE TO LIVE OUT THIS TENDENCY TO BE DRAMATIC”

What’s very noticeable in your lyrics is this tendency towards drama, towards melancholy. Where does that come from?

Apollo Sissi: Well, the emotion comes out of me. Then it goes into the microphone, into the laptop, then it is mixed with the whole and goes out again through the speakers to the listener. On this way through the world, something has to get lost somehow. In order for me to express what I feel inside, I have to live out this tendency to be dramatic, so that the listener can recognize what I feel. Does that make sense? Otherwise, I could draw another diagram. [laughs]

Essential to the vibe of your songs, somehow, is the aesthetic of your music videos. Do you already have ideas for the visual realization when writing the lyrics?

Apollo Sissi: The video for “Engelserscheinung”, for example, I had the video idea beforehand and wrote a script for it. Then I thought to myself, “Hey, it would actually be cool if there was a song in it, too,” and then I wrote one for it, where it describes exactly what happens in the video. Otherwise, the songs are usually written beforehand. They usually dictate a lot of the direction in which the visuals have to develop.

“Engelserscheinung” is very different from your other songs. It’s something completely different in terms of sound and voice.

Apollo Sissi: That’s right. From the ones I’ve released, definitely.

You said you made the video for it first. How did this song come about then?

Apollo Sissi: At that time, I wrote to many friends on WhatsApp, which questions occupy them the most. All the answers that came back then became these hook parts, like “Why am I alive?” or “Do you love me?”. For the video, I actually went hiking for a few days. I was looking for a dystopian landscape that was completely destroyed. Something that looks like the apocalypse. It really wasn’t that easy. I asked mountaineer friends for help and then just went looking for a few days. After four days, I think, I finally found something. So we hiked up there, shot it and turned up the loud techno on the mountain. That was really special, the atmosphere was so good. It was an incredibly beautiful video shoot.

Is there actually an exciting story behind the name Apollo Sissi?

Apollo Sissi: Well, Sissi was actually my nickname before that. Then I looked for words with which I can define myself otherwise. Since Apollo stands for space travel and poetry, I thought it would be a great fit. Plus, both words have those double consonants, which makes the overall typeface so beautiful.

In songs like “Kylie’s Skit,” people perceive you as very confident, while other songs sometimes show more vulnerable sides. How much are your real personality and your artist figure related?

Apollo Sissi: They are identical, I would say. It is otherwise pretty difficult, I think. You live and experience things, which you reflect in your songs. Of course, there are now sentences that are completely exaggerated and perhaps can only be understood if you think humoristically. But that’s definitely me.

“MOVIES REMIND ME OF HOW BIG YOU CAN ACTUALLY THINK […]”

Where do you get your inspirations?

Apollo Sissi: I have so many inspirations. Books are a huge one. Of course the instrumentals and the music that my producers make. When I work with Flipper [note: Alex The Flipper, producer], we usually talk forever about lots of things. He’s so empathetic and understands me completely. At times, it’s almost telepathic. We don’t see each other for a few months sometimes and then he sends me these exact beats that I need in my life right now. They’re perfectly in tune with what’s going on with me at the moment. Other music is also inspiring, of course, as are movies. Films remind me how big you can actually think and how big projects can be. That you can just go infinitely far with something. They go to so much trouble and think of details that hardly anyone sees, but subliminally and profoundly then somehow stand out. Drawing is also an inspiration, it always reminds me that you can’t make mistakes and just kind of go for it.