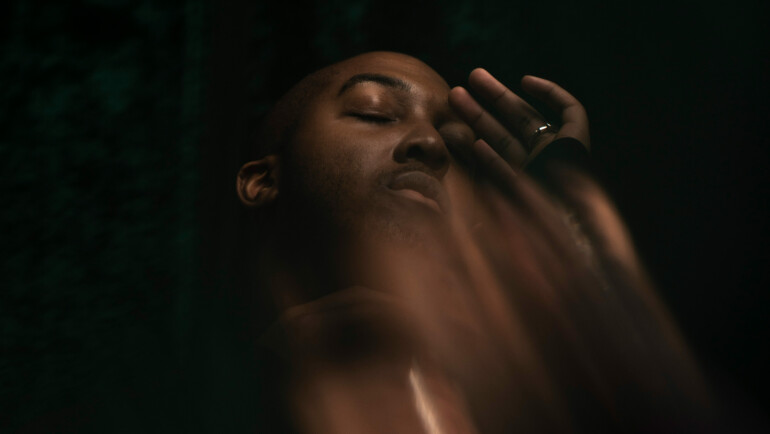 Prior to the release of his new single “On To You”, Tonica Hunter sat down with the singer songwriter KAREEM ADETORO-IPAYE to recap on his musical journey so far, his artistic inspirations and why (world-) creation is so important for an artist in today’s world.

Not only is he giving us uplifting, melodic dance tracks, he is at the same time challenging us to reconsider masculinity and do away with patriarchy in the music industry, not to mention showcasing emotional vulnerability as a creative strength. Kareem Adetoro-Ipaye is one of the artists to watch as he enters the Austrian pop and dance scene with his latest release and brings just the fresh energy it needs.

Kareem Adetoro-Ipaye is a multitalent who is not really like any other artist in Vienna. Yes he sings, soulfully with a lightness and cheerful energy, but he is, as well, a predominantly self taught dancer who also took Ballet and Hip Hop dancing classes. As well as sometimes coming up with his own choreography for his work, he also song-writes – and this is just a taste of what this artist can offer, which is a lot.

When asked about his musical inspirations, Kareem thinks big: amongst cited influences are not only Lady Gaga, but the Belgian hip hop/electronic wonder, Stromae.

We spend lots of time talking excitedly about Stromae – his artistry, his playing with gender roles, questioning of internet fame, his playful videos and cutting social commentaries. Apparently our shared passion is referencing all of his videos and masterful wordplay – even his artist name means master ‘maestro’ and is crafted from French ‘Verlan’ which twists the word back to front as a language of defiance forming ‘Stromae’. One of Stromae’s most famous hits ‘Tous les mêmes’ calls out men for being ‘all the same’ (translation) – a critique which was at that time – 2013 – quite ahead of mainstream conversations in the music industry, on the dangers of patriarchal masculinity – and one of few of such critiques offered by a man.

The parallels between Stromae and Kareem are certainly there. Both with francophone backgrounds, but also more broadly multilingual men of African descent born in a European metropolis. Both artists who create worlds and spaces for themselves as they are and in their totality and most importantly, unapologetically. Not leaning on traditional ideas of manhood or music, or limiting themselves to that discipline alone, they create worlds where they cross into various dimensions – they try to project a time and space beyond where we are now. On this, Kareem says, “This world I create is a feeling more than a physical space. Coming from growing up and feeling misunderstood – feeling like the odd one out. It made me realise and embrace that I was different and music always felt good. No one can judge me in that space.” It undoubtedly reminds one of the Afrofuturist movement and the need for Black subjects to create spaces of liberation and expression within their field of art – from anything from sci-fi literature to music, just as Kareem does.

I ask him why this is a key part of his practice and his reply immediately lets me know it is an innately altruistic act – his desire to create a world  is for it to allow others in and to share that space, or, create their own spaces of artistic expression. An invitation to Kareem’s world is captured beautifully in a 60 second introductory trailer: ‘I wanna create a space you can feel safe and confident in’ as his silhouette takes up the screen and moves between the red lighting. He has a way with words, having also written the text for the introductory trailer himself, directly addressing the audience with his innermost feelings without hesitation. It is captivating and it is energetic – a pure extension of the artist who even on his social media accounts demonstrates his vitality. As he moves between scenes in an abandoned building in the middle of Vienna, it is clear Kareem is creating, within a hometown familiar to him, a whole new world. It is like watching the birth of an artist as he emerges out of his own creation but also as a part of it.

And this is important because Kareem defies not only what is projected on patriarchal manhood but also what is projected onto Black men. His appearance – outwardly strong, tall and physically prominent, yet also embodying gentleness and fluidity, openness to emotion and loving kindness toward others – is hard to miss. The last time he performed at Hotel Motto Vienna’s opening in 2021 it was a grand affair where he serenaded guests. There, off stage, it was apparent that Kareem is the last person to take up much space, however – there’s a charm in the shyness to him and that switch to this artist persona is wonderful to watch as he comes alive, as he did that night.

For just over two years Kareem has been working with Austrian producer Phil Speiser. The two met by chance at the Vienna Life Ball, an AIDS charity event, “where I snuck into the VIP-area,” Kareem laughs. A few weeks and some phone calls later, Kareem found himself in front of Phil again for a spontaneous live audition at a bar this time. And some time after that, Phil invited him to record at his studio. The duo have, according to Kareem, since developed a friendship and connection which constantly motivates and inspires each other. Together, they are currently working on Kareem’s EP “In Case We Meet” expected this Summer of which ‘On To You’ – a lyrically vulnerable yet strong, with ballad-like energy yet a bouncy dance track – is the first track released on the 4th of February 2022.

But this time last year was not the easiest time for Kareem who was caught, as many musicians are, between making a living and making a living from music. Between pursuing his passions: songwriting, singing and recording in Phil’s studio, Kareem also worked part-time somewhere where he could do the work but his heart always remained with music. In Austria, where only a few artists get to be in and stay in the public light, or receive recognition or awards, and where even fewer of them, if any, are BIPOC (Black, Indigenous and People of Colour), it is not easy to live off music alone, unless you have the privilege of having the financial and/or social capital to help.

As a multilingual, open-minded artist who likes to meet people and travel, Kareem grabbed the attention of labels outside of Austria. He signed last summer with Wagram Music – an independent record company based in Paris, with offices in Berlin and Los Angeles. This has opened up his chances of gaining an international fan base and therefore being able to sing and produce in any of his spoken languages: French, English, German, Yoruba, should he choose. This was, timing wise, the positive boost he needed to realise the next step of his musical career – with a label behind him and with a new sound and a new energy.

Musically ‘On To You’ is also a new direction for Kareem – daringly pop and dancy – it differs to his earlier days of German afrobeat with tracks such as Focus. This seems to ring more true to what he, as a musician, wants to put out there, rather than what is expected from him as a Black man and musician. Music genre and what is stereotypically ‘Black’ musically or style/image-wise is a major topic and often sore point for many Black artists who break from expectations on them to produce typically ‘Black’ genres such as Hip Hop, RnB, Soul. This is a projection which is hard to meet for diverse Black artists and which is nonsensical given that most genres from Rock, to Pop to Techno are either initiated, influenced or inspired by Black culture and history. By breaking from the burden of expectation, Kareem is truly a unique artist who is doing what he wants to do and not what is pushed onto him. It speaks volumes for his emotional maturity and willingness to break into and show his ability in many other fields such as dance, fashion, aesthetics. It is no wonder those he cites as his inspiration cut across all of these disciplines with such seamlessness.

Kareem Adetoro-Ipaye brings something novel and exciting to the Austrian music scene. His personal and artistic drives are the champions through all of this, daring to go beyond limited and limiting ideations of gender and disciplines, and doing it with a soft yet strong intention. He has the ability to appeal to many audiences crossing genres of pop and dance as well as transport his audiences into a world that any artist dreams of, and if we are honest, is less readily available to Black artists: a space to create freely and, ultimately, be free.