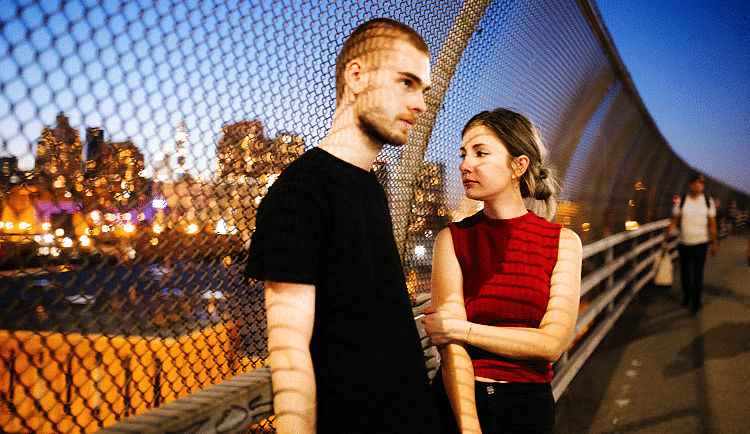 The Upper Austrian duo LEYYA is currently at a point in their career somewhere between being a local insider’s tip and the next big Austrian pop export. But that could all change soon. After releasing the hit singles “Superego” and “Butter” and receiving the FM4 AWARD at the AMADEUS AUSTRIAN MUSIC AWARDS 2017 the band has now released their second album “Sauna” (Las Vegas Records). That means more new hits to fuel their international takeoff.

The album’s intro is an English news sample that clearly shows what the band’s goal is: international recognition. And based on the first two singles, the signs are good. “Drumsolo” not only puts that instrument in the spotlight but also delivers the first catchy tune. One that features virtuoso drum breaks which drives the rest of the song. LEYYA haven’t changed their recipe for success. Catchy synthesizer hook-lines, head-bobbing beats and the melancholic voice of Sophie Lindinger still define their newest album. “Zoo” provides the next chorus that invites you to dance and sing along to. The ease with which LEYYA can shake catchy synthesizer melodies out of their sleeves is as remarkable as their ability to write memorable vocals.

Although they maintained their basic ingredients, the duo has also changed their sound and has a few surprises in store. In some songs you get closer to reggae than the sometimes powerful trip-hop of the first album. “Oh Wow” for example creates a completely different vibe than LEYYA fans might have expected.
The mood has changed as well. Melancholy and hopelessness have lost their absolute supremacy. LEYYA are now much more colourful and sometimes even radiate a positive mood. As they did in “Heat”, for example.

It’s only fitting that a rainbow made it onto the cover of the album. The creative instrumentation of the songs including percussion, wind instruments and a variety electronic sounds also contribute to a balanced diversity on the album. But you can’t have light without dark, and the darker sides of the human emotional palette are explored in other songs of the second album. ”We Did OK” combines the wonderful vocals of Sophie Lindinger with a minimalist instrumentation. The result is an indulgent and reflective track. Something which is only possible because of the top production skills of Marco Kleebauer.

It is hard to avoid comparisons with the British indie stars The xx when listening to “Sauna”. LEYYA perform with a similarly layed-back playfulness and technical skill, and are immediately recognisable due to the distinctive vocals. Marco Kleebauer and Sophie Lindinger are on the cutting edge of modern pop. They have written strong songs for their second album, and that can only accelerate their rise to the top of the pop worlds ranks.