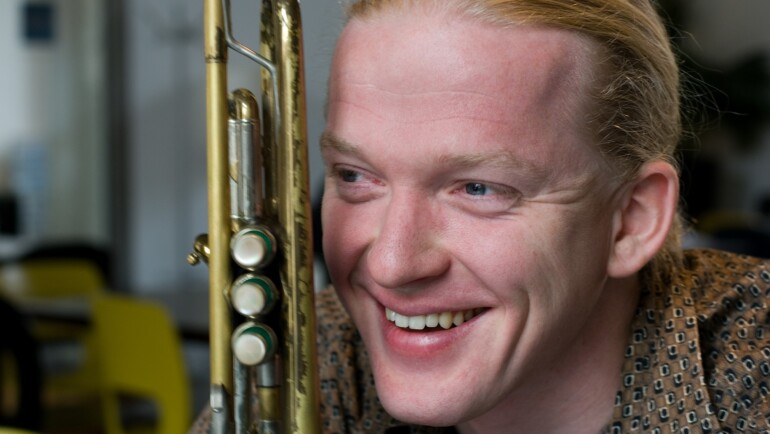 Lorenz Raab is without a doubt one of the creative and innovative musicians of the local jazz scene. This is a musician who thrives in his own creative freedom and for whom the words “fear of contact” are a foreign term. There is hardly any genre in which the very versatile trumpeter has not successfully pursued. Driven by an almost irrepressible curiosity and love of experiment, the multifaceted jazz musician repeatedly rises to new and exciting musical challenges.

Sticking to traditional jazz standards is not really Lorenz Raabs’s thing. The award-winning trumpeter does not understand music as a system subdivided into different segments, but rather as a broad artistic working field. Performing somewhere between jazz, electronica, world, pop, folk music, contemporary music and avant-garde, the native Upper Austrian extracts the best moments from each field, in order to merge them into a highly individual musical language.

The gifted musician always strives to follow an innovative approach. With the meticulousness of a scientist, Lorenz Raab attempts new methodologies that expand the tonal range of his performance with additional facets. “I am particularly concerned about discovering and exploring new sound patterns. I sometimes use the trumpet as a percussion instrument or a noise generator,” says the trumpeter in a mica-interview in 2007.

Although the love for his instrument developed rather slowly, as the instrumentalist, born in 1975 in Linz, admits: “The love for the trumpet was not initially “real”. In primary school my father actually decided what instrument I should learn. He was a conductor of the local brass band in Rainbach and desperately needed a first trumpeter. It was not before my decision to study this instrument at the Vienna Conservatory at the age of 14 years, that I decided to pursue my career as a musician. After many battles with the trumpet – at 22 I seriously thought about quitting – the love for music prevailed.”

Crucial to Lorenz Raab’s change of heart was a two-year stay in Bremen (1997-1999) where he received the opportunity to learn from international stars such as Kenny Wheeler and Ingrid Jensen. After his return to Austria, he began to study the concert trumpet with Hans Gansch at the Salzburg Mozarteum.

The two-time Hans Koller award winner (in 2003 he received the Audience Award, in 2004 he won the award for Newcomer of the Year, was nominated in 2006 in the category “Album of the Year” for his CD “bleu” and in 2007 in the category “Musician of the Year”) also uses very complex and diverse methods in his own projects. For example, with his project “: x y” band (along with Herbert Pirker, Matthias Pichler, Oliver Steger and Christof Dienz) where he makes the attempt to generate electronic sounds with acoustic means.

Stylistically, his trio BLEU (with Ali Angerer and Rainer Deixler) generally deprives from any attempt of categorization. This trio celebrates the art of bringing seemingly opposites together, tradition with modernity, jazz with improvisation, world music with avant-garde. A similar approach, but then again in a totally different manner, applies to :ZOÉ … and, and, and …

Besides his brilliant instrumental skills, it is especially his pronounced openness to new ideas, which have made Lorenz Raab one of the most outstanding musicians of the country. No matter whether as a solo artist or as a member in a formation, the native Upper Austrian often presents himself as an artist who is one step ahead of his time. With the ability to raise his own music again and again to a new level, we may assume that we will get to hear even more from this exceptional trumpeter in the future.
Michael Ternai