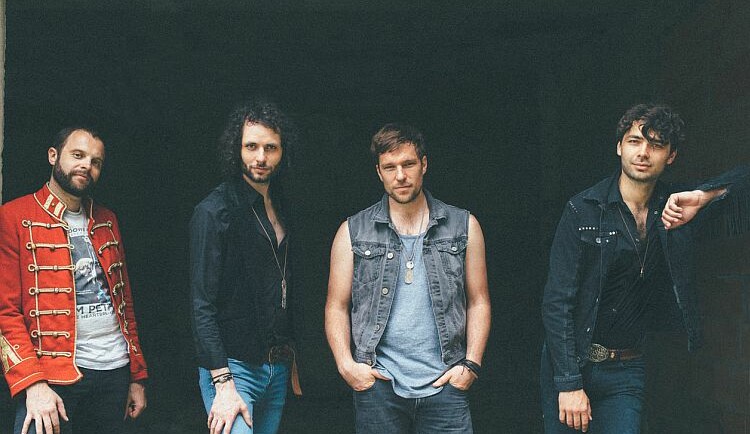 The genre that THE WEIGHT uses to describe themselves is “Heavy Rhythm And Roll’”. What does that mean? 21st century Retro-rock that breathes new life into the 70s and 80s. This was a time when instruments, analog sounds, and an audible band structure still had the advantage over all kinds of other constellations that pass as a band these days. Originally from Vorarlberg, THE WEIGHT have relocated to Vienna where they now reminisce about those fine times when music had a different significance than today.

Their first EP “Keep Turning” (2014), already sounded more than remarkable and laid the foundation for the band’s success in the German print press (Classic Rock Magazin, Rock Hard, Rock It). THE WEIGHT followed that up with the release of their first full-length album in the fall of 2017. The self-titled “The Weight” has it all and has already brought the rock band some positive milestones.

Recently nominated for the Amadeus Austrian Music Award in the category “Hard & Heavy”, THE WEIGHT have made a rapid ascent up the ladder to success. They haven’t only embraced the stage and performed more than 150 concerts over the past few years, but also made themselves at home in the television studios of the German-speaking media landscape, with features on Pro7 and Puls4. So the door to success has already been opened, and when you listen to the new album, it shouldn’t be long before the door is simply blown off its hinges. The good old guitar riff still works wonders and Tobias Jussel (vocals, keys), Michael Böbel (guitar), Patrick Moosbrugger (bass) and Andreas Vetter (drums) are very aware of its effects. The collaboration with the producer of such successful modern bands as Die Ärzte or Sportfreunde Stiller is sure to contribute further to THE WEIGHT‘s success.

TAKING HEAVY RHYTHM AND ROLL TO THE MASSES

With singalong-refrains, good-mood backing vocals (à la Kiss) and a good portion of testosterone THE WEIGHT want to let you know that the Viennese Danube Canal is not so far from Sunset Boulevard in L. A.. It’s amazing that songs like “Hard Way” or “Trouble” can sound like they came straight out of 70-80s California despite having been produced in Vienna in 2018. The music video for “Trouble” was also convincing. Not just because of the skillful songwriting: an ironic and cunning video collage pays tribute to many of the band’s role models. THE WEIGHT, have nonchalantly devoured the most famous rock record covers and made it to film festivals in Toronto and Barcelona.

These role-models are diverse and THE WEIGHT’s debut album manages to live up to the expectations that influences like Led Zeppelin, Kiss, The Who, Thin Lizzy, The Beatles, Guns n’ Roses or Deep Purple could generate. Speaking of Deep Purple, “Hammer, Cross & Nail” has taken heavy clues from the best they have to offer. This track stands out not only because of its massive eight minute playtime – on an album with several crisp, radio friendly numbers below the three-minute limit – but also because of its progressive approach to songwriting. The focus here is less on vocals and chorus than on the skills of all musicians. In a 70s-heavy atmosphere finely crafted instrumental elements are celebrated and give the song a life of its own. With a Hammond organ in the leading role, of course. In “Jam” the name is the game. In addition to a groove-based structure, guitarist Michael Böbel is allowed to prove his skills with a classic guitar solo, one in which you can clearly hear the joy of the musician behind it.

THE WEIGHT‘s mission is clear: at a time when the old bands are unfortunately slowly dying out, an infusion of new bands is needed to carry on the flag of rock and to give audiences the chance to see stages drenched in the sweat of passionate performers. The bands role-models are clearly recognizable, but THE WEIGHT don’t make a secret of it. They use this to their advantage. They are generous rather than stingy with the allusions. Something easily seen in the very viewable video to the potential ear-worm “Trouble”.

In a century that still hasn’t seen its own 70s and 80s, but in which the line-ups of mainstream festivals are still dominated by old heroes from those epochs in the past, THE WEIGHT could be the right choice. Rock is timeless.