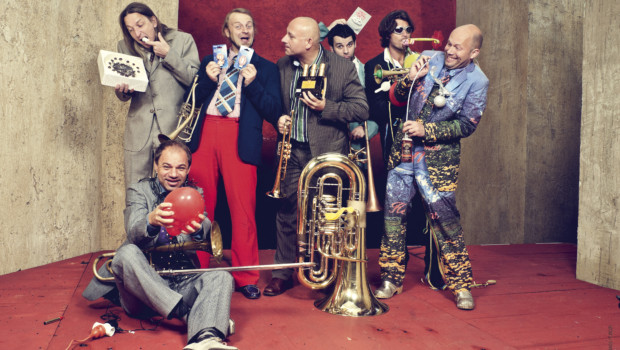 For two decades Mnozil Brass has been able to impress many, many music connoisseurs at home and abroad. Those who have already exprienced the combo live probably know why. A concert of the seven headed formation almost always evolves into a highly thrilling and entertaining musical experience. Thus, there are plenty of reasons to celebrate this special anniversary year. And that’s exactly what Mnozil Brass has set out to do in the coming months with an extensive European tour.

When speaking about Mnozil Brass, we speak about one of the most internationally successful formations of the country. Not only that the band now plays up to 120 concerts a year, most of the performances are sold out weeks before the actual show. This also applys to the upcoming tour, which will lead the seven brass players Thomas Gansch, Wilfried Brandstötter, Gerhard Füssl, Zoltan Kiss, Leonhard Paul, Roman Rindberger and Robert Rother to various countries, including Austria, Germany, Switzerland, Italy, Portugal and England.

A true success story, which dimension no one could have guessed in the beginning of 1992. To just casually hit the stage and run through the songs, is not something Mnozil  Brass endeavors. Instead, the members of the band have always aspired to deliver a real show and offer the audience something that goes beyond an ordinary concert experience.  Thus, Mnozil Brass always includes theatrical elements into the performance, which ultimately gives the show a particular ‘operettesque’ touch.

As open as Thomas Gansch and his colleagues are in terms of their performance concept, they are just as free-spirited when it comes to style questions. Musically, they cover the full program. Everything is represented in a unique and multi-faceted sound – from  jazz and pop to classical and world music.

Listening and seeing Mnozil Brass is a lot of fun with musical entertainment at the highest level. You can hear that these are seven musicians that share the same tonal visions and understand how to perfectly transport their music with a big dose of wit.