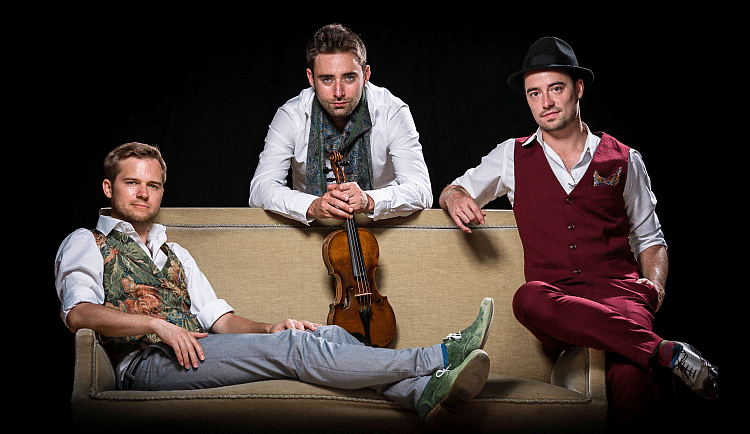 From classical music to international folklore, from jazz to chamber music, from the sound of the north of Europe to that of the South. “Musical diversity simply opens every door.” This is the motto the Viennese trio COBARIO (HERWIG SCHAFFNER, GEORG AICHBERGER, JAKOB LACKNER) have taken to heart. And you can hear it on their current and meanwhile fifth album “10 Worlds” (South Pole Entertainment). HERWIG SCHAFFNER and GEORG AICHBERGER spoke to Michael Ternai about the natural development of their sound, and the influence their many travels and street performances have had on it.

If you listen to your releases, especially your current album “10 Worlds”, you will immediately notice an incredible musical diversity. Have you consciously chosen this open approach?

Herwig Schaffner: The fact that our music sounds so diverse may be due to the fact that it is actually composed by all three of us. When three people with different musical backgrounds like us come together and work on pieces together, something very diverse is created in a completely natural way. I would describe our music as a potpourri of European influences. The only concrete requirement we let ourselves be limited by is the instrumentation of our trio.

Georg Aichberger: We really do come from very different backgrounds. Herwig comes from classical music, I’m more from the jazz and pop area and Jakob, our guitarist, comes from the finger style acoustic corner. Due to our interaction and the sound that our three instruments deliver, our sound has actually developed relatively naturally. We never really had a real plan in which direction we wanted to move musically. We never pretended to want to sound one way or the other. It simply depends on the idea and what we can do with it.

The beauty of your music is that despite all its diversity, it sounds very homogeneous and unmistakable. What is the challenge to turn this variety of influences into a unique entity?

Herwig Schaffner: We are a purely instrumental band. There’s no vocals with us. This means that the other components must be all the more interesting. It is important to us to get a piece to the point. Therefore, we deliberately try to refrain from anything that would take us aways from that focus. When we realize that we are wandering on part of it, we refocus again.

“IT IS CRUCIAL THAT WE LIKE THE THINGS OURSELVES”

Georg Aichberger: We carefully consider what the statement of a piece should be, what feeling it should convey, and how we can achieve this instrumentally. We don’t really write anything down. Our composition process is that we record things over and over again and then listen to them. Then we decide whether to pursue the idea or reject it. Ultimately, it is crucial that we like the things ourselves.

What also stands out is that each of your albums always sounds different and sets different musical accents. Your musical development seems to be important to you.

Herwig Schaffner: Of course. Our goal is always to develop ourselves further. We don’t want to repeat ourselves and just deliver a different version of the same piece. A piece must always represent something new and unique, something we have never done before. We also consciously take time to create the pieces. We always isolate ourselves together for a couple of days and see that we move forward undisturbed. Most recently we spent a few days together at Lake Balaton in Hungary to work on new material.

You have travelled around the world a lot in recent years. To what extent do these journeys find their way into your music?

Herwig Schaffner: You can really hear that we have been traveling a lot in recent years. We like to be inspired when we are on the road and take many ideas home with us. We were in England, Scotland and Spain last year, for example, and the stays in these countries have, of course, found their way into some of our new pieces.

The sound of Cobario sounds very international. When you play in other countries, are you actually perceived as an Austrian act?

Herwig Schaffner: Three years ago we were booked by a European company for an opening event in Hong Kong. This company opened a branch office there and wanted a musical act for this event that sounded explicitly European. But what is European? The people in charge briefly considered booking a pop act, but then decided against it because they thought that Hong Kong’s people would associate it with American music. That’s how they came upon us, because they thought that when you listen to our music, you connect it immediately to Europe. Our sound is the prototype for music from Europe. I think that is a perfect description of how we are perceived elsewhere.

It’s nice that our music is very well received almost everywhere. We have played in Germany, Switzerland, Italy, Turkey, Albania, Canada, Canada, Iran and recently in Uzbekistan. And no matter where we have been on stage, we have been very positively and warmly received.

“INSTRUMENTAL MUSIC IS JUST WHAT DEFINES US.”

Is it conceivable for you to add vocals to some pieces in the future?

Herwig Schaffner: We have already thought about that. Maybe to work with a vocalist on two or three songs. In principle, however, we want to remain purely instrumental, because that is precisely what has become our trademark. Instrumental music is just what defines us.

The band’s history is also interesting. You began as street musicians in Spain and are now playing in important international concert halls. How did you come up with the idea to try your hand as a band on the streets of Spain?

Herwig Schaffner: We went to Spain at that time to see if it would actually work. And it was a very good thing. We drove into a city, pitched our tents and played there. After a few days we moved on to the next town. This experience was a very good education for us. Primarily because as a band you get immediate feedback. If someone liked the music, they stopped. If they didn’t they moved on. We have learned a lot of useful things from this time. It taught us how to entertain an audience. Whether on the street or from a concert stage.

Georg Aichberger: When you play on the street, you learn to deal with surprises. Some things that go wrong just don’t upset you so easily any more. Moreover, dealing with the audience is different. This isn’t about you. You have to win them for yourself and arouse their interest. When you play in a concert hall, it’s different. People are coming to see you.

How are you positioned in the Austrian music scene? Is there scene you are particularly close to?

Herwig Schaffner: Since we have been international from the very beginning, not really. The interesting thing is that we are probably much better known in other countries, especially in Germany.

Georg Aichberger: We have actually been doing our own thing since the very beginning. We didn’t have much to do with a scene and we really developed our audience on our own. There was hardly any exchange with others.

Finally, What else is possible with your music? Is there anything that will never come into your pieces?

Herwig Schaffner: I wouldn’t rule anything out. Our music has room for anything we like. Anything is possible. The only limitation is that we have to think it is the right thing