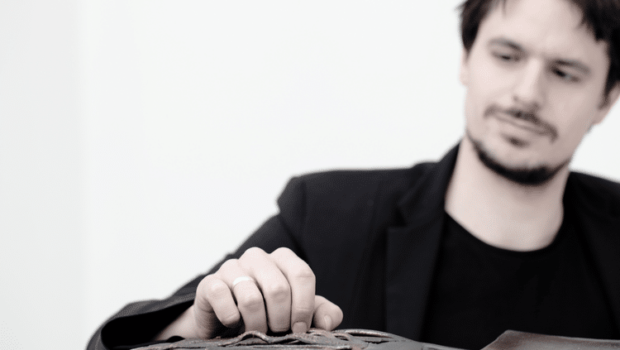 Michael Bruckner-Weinhuber is the perfect example of a musician that does not want to limit himself to making music. For some time a few photo cards were floating around, with motifs of ants on the front and texts of his favorite writers on the back. “I have been dealing with macro photography for some time now”, he explains in an interview with Alois Sonnleitner, and talks about how he spends hours lying on a meadow at the Hernals cementery to observe the surrounding activities of ants. The view through the magnifying glass, combined with the desire to transform nature into art, has been his inspiration and motivation for many years.

Formations that the mutiple skilled musician, who learned his craft at the Bruckner Conservatory in Linz, collaborates in: Nifty’s (Michael Bruckner-Weinhuber, Fabian Pollack, Dominik Grünbühel, Mathias Koch), which deals with Klezmer in the broadest sense und just finished producing their third CD. Again with Pollack, Bruckner-Weinhuber experiments with the dialect poet Wolfgang Kühn in Zur Wachauerin. More jazz-oriented is Bruckner-Weinhuber’s collaboration in the Maja Osojnik Band, in the trio trip-ling with Viola Falb & Martin Ptak and in the ensemble Verso of the violinist Irene Kepl. Structurally more open is the music of the current trio with Ingrid Schmoliner (prepared piano) and Allesandra Esramo (voice). In addition, Bruckner-Weinhuber contributes to the combos of the pianist and composer Hannes Löschel: on the one hand in the Hannes Löschel Stadtkapelle, on the other with the vocalist Phil Minton in the band Exit Eden, which caused quite a stir at the festival Taktlos in Zurich and météo in Mulhouse.

Michael Bruckner-Weinhuber regularly allows his curatorial ambitions to run free, often in collaboration with Renald Deppe, who oversees the Strenge Kammer at the venue Porgy & Bess. Together with his brother Markus, Michael Bruckner-Weinhuber organizes the series “turn the corner!”, which focuses every Wednesday on interdisciplinary forms and includes all kinds of music with experimental tendencies. In a series of Renald Deppe, one selected band performs on three evenings in a row, however always with three different programs. At the inauguration Bruckner-Weinhuber performed with Julia Noa Fischer, Andreas Schreiber and Markus Pichler in the formation Attosphere, where they partly improvised and partly interpreted Schumann songs.

An evening with Julia Noa Fischer and Nadine Kegele in the Strenge Kammer of the Porgy & Bess also heralded the series Dunkelkammer, again curated by Bruckner-Weinhuber together with the initiative fiveseasons. With this series that takes place every last Friday of the month, Bruckner-Weinhuber wants to present various art forms in an absolute dark room. Artistically and for the audience this always equals a challenge. With this series Michael Bruckner-Weinhuber wishes to blind out the usual routine and radically raise the question in the dark room: What is left?