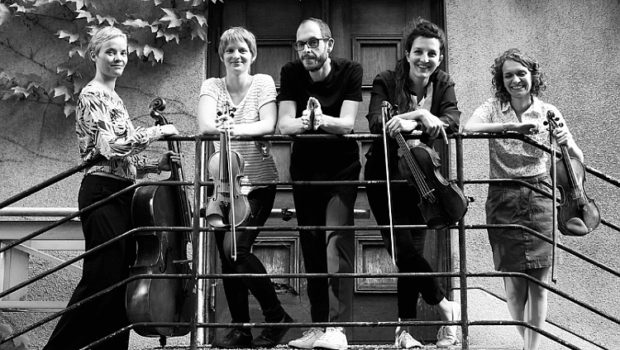 Many people are familiar with CLEMENS WENGER as the pianist for 5/8ERL IN EHR‘N or as the driving force behind the Viennese JAZZWERKSTATT. His first solo album “Neapel” is an excellent example of what a talented composer he is as well. In an interview with Markus Deisenberger he explains why he was still searching as many of his colleagues were already on their third or fourth album, and how he eventually discovered his own sound.

“This man clearly and urgently needs to be composing soundtracks” is what the Austrian newspaper Der Standard had to say about your album “Neapel”. There really isn’t much to add to that. The Falter came to the same conclusion. “Looking for a film composer? Wenger is your man!” Has hollywood called yet?

Was this the reaction you were planning on with this album?

Clemens Wenger: That wasn’t my goal, no. But I have long been interested in programmatic music, and I completed my post graduate studies in film composition. That is probably where the influence to compose to images and stories rather than than just developing from the sound came from. It’s important to me that I can say something. I don’t want to just compose into the blue, but to be able to tell the stories to the images in my head as well as possible. Maybe thats why people believe to be hearing a story.

Is “Neapel” a continuous story or a collection of different stories?

Clemens Wenger: Each song has a theme. But the continuing theme is Naples, because it’s a city I like to take vacation in. I am actually a team player, and with 5/8erln and the JazzWerkstatt I spend a lot of time on the road with groups. But I go to Naples to vacation alone. That is also where I got the courage to make a solo album.

What fascinates you about Naples?

Clemens Wenger: It’s on the see and has a beautiful and really long beach… I feel comfortable there. But beyond that it is incredibly loud and chaotic. There is a lot going on. The chaos and bustle actually make me calm and help me let go of the stress. What I also love is that it, very atypically European, doesn’t feel like a museum. In our culture the old is raised so high, and so honoured that it is frozen and museum-like. In Naples they apparently don’t have enough money to renovate the old town centre like we in Central Europe do… It seems to me that there is more acceptance to say goodbye to the past and focus on the present and future. Maybe it’s Vesuvius that makes sure the people have internalised the idea that everything can end in a minute and holding on to the past is senseless. This is just conjecture. But I have the feeling that that is exactly why it is so lively there.
In Baden-Baden, which I recently visited, I have just the opposite feeling. You can’t walk on the grass there. The old is so holy, is so revered, that there isn’t much room next to it. And that affects the mentality of the artists, who don’t dare to say goodbye to the past and try something new.

And that’s exactly where you decided it was time to try something new?

Clemens Wenger: Exactly. That’s where I found my Inner Direction. A lot comes to me when I am alone. I talk to myself and eventually I start to sing. That doesn’t happen to me very often when I am with people because I maintain my social contacts, discuss.

The sounds that can be heard between, and sometimes during, the pieces – street-noise, talking – are those field recordings that you recorded there?

Was that important to transport the local colour?

Clemens Wenger: It was important to me from the film-music perspective. I often made something called an “oral story”. That means I record a soundscape that becomes the basis for improvisation. And then I play the soundscape back at home.

And this soundscape brings you back to the place it was recorded?

Clemens Wenger: Yes, it brings me back. Or it creates a different mood. I usually sit alone in front of my piano, it’s always the same. Maybe I can hear a little more noise from the street. That’s why I sometimes listen to a different place. It inspires me. The sounds – John Cage said this as well – have something musical. But so does the tempo of the city or the sound of the forest.

Clemens Wenger: Yes, and one of the pieces I did as a collage and used the street noise as a compositional element. But I often just use it as a background for myself and as inspiration for composing.

Where does your inspiration come from?

Clemens Wenger: I rely on my intuition and my ear. As a teenager I had phases in which I went to nearly every concert that was played. But when you do a lot of practicing, composing and playing, you become more sensitive and selective.

Can you imagine eventually switching completely to soundtrack composition, or is a broad swath of diverse projects an artistic necessity?

Clemens Wenger: It isn’t unthinkable, but it is unrealistic, because there just aren’t enough opportunites. Hollywood hasn’t called yet. I have already made some soundtracks for student films, but I can’t make a living from that. Artistically it would interest me, but I wouldn’t reduce the number of my other projects for it.

Clemens Wenger: There were years when we would play ninety concerts, but we reduced that and now “only” play between forty and sixty concerts a year. One has to be happy to have the chance to do that. And it is also an important source of inspiration for my personal music. It’s a lot about the song and the meaning, which helped me find my own music. I come from jazz, from improvisation, where anything is possible. That had me scattered. The concentration on finding an appealing sound helped me.

Reduction was the point?

Would you call “Neapel” a jazz album?

Clemens Wenger: Good question. If I was the lead buyer for a store I wouldn’t put it in the jazz section. But I do see myself as a musician and composer in the jazz tradition. And I will always remain one. I come from improvisation and see jazz like Miles Davis did. One is constantly developing, looking ahead but also right and left. Davis always touched on rock, pop and experimental music. Jazz is something that is always breathing down my neck and pushes me forward.

Is the interplay between acoustic and electronic – sometimes, on some tracks of the album the electronic part is greater – improvisation or calculated?

Clemens Wenger: It’s improv in the sense that I had to try a lot of things until it sounded good. It’s a refined and reckless thing, and doesn’t always work. The plan was to combine these two worlds, to bring them in harmony with each other so that it was a smooth mix that the listener doesn’t even notice. That took a lot of time.

A scriptwriter once told me that the main part of his job was staring desperately out of a window. Is composing music a similarly torturous and self-destructive process or do you find it easy?

Clemens Wenger: The process isn’t painful, but it is difficult and you find yourself wanting to stop. To give up. And you have to motivate yourself to finish the music. My first studio-date for a solo album was made eleven years ago. For a jazz trio. I cancelled it.

Clemens Wenger: Because I wasn’t certain if it was a sound that I wanted to carry the name “Clemens Wenger”. Back then I thought “Good, I play piano, have composed a few pieces, the rest will be improvised, I have super musicians with me”. But in the end it wasn’t enough. I kept trying, while my colleagues were recording their third and fourth albums. I didn’t want to do something that sounded like so many others. It bothered me a lot that it took so long, until I was 33, to do it.

Beginning late is better than making something bad.

Clemens Wenger: Yes, but the pressure is still there.