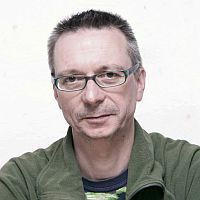 Josef Novotny (b.1963) is a composer, sound designer, keyboardist, organist and pianist, and is one of the most revered multi-disciplinary musical personalities in Austria.

He had something of a prodigal beginning, as he recalls a defining moment of his childhood:
In my hometown of Meggenhofen, in Upper Austria, they were looking for a replacement for the old church organist, who was already almost totally deaf. I was 11 or 12 and had a couple of years of piano lessons, and couldn’t play very much, but the organist wrote out the church songs in a simplified notation so that I could read them with my limited reading skills. My legs were too short to reach the pedals, so the notation also excluded the use of the pedals, and on top of that the technical condition of the organ was extremely poor, many of the keys would often stick and stay depressed. I would stand next to the organist while he played, listening and watching, but more importantly, I would unstick the keys while he played, because he couldn’t hear them anymore. Every once in a while I was allowed to play a song, and after a while I was able to play though an entire mass. What I most enjoyed was that during the liturgy, there was quite a bit of improvisation, during the communion, and the postlude of mass. I enjoyed the improvisation much more than practicing, and at that time I thought that it wasn’t necessary to practice improvisation.

Clearly invigorated by this early experience, Novotny went on to study organ with Peter Planyavsky and composition with Erich Urbaner at the Vienna Music Academy. Novotny recalls his studies as formative for his love of composition as well as improvisation, which continued with his attendance of the Jazz Institute (at the Bruckner Conservatory at Linz), founded by Adelhard Roidinger, who instilled in him the importance of practicing of improvisation. Since then Novotny has always moved somewhere between contemporary music and Jazz and between composed and improvised music. A close musical partner of his, the saxophonist Max Nagl, with whom he has collaborated since his Academy days, has been an essential partner in both ensemble work and a plethora of recordings they have made together.

Furthermore, Novotny has a long list of collaborators which include (but is certainly not exhaustive): Franz Hautzinger, Radu Malfatti, Tanja Feichtmair, Elisabeth Harnik, as well as the “Ensemble Kalksburg”, which includes Chris Abrahams, Thomas Lehn, Lol Coxhill, John Russell and Julie Tippets. He also a variety of band projects with which he participates such as Soundog, Antasten, and LULL, and also has paired up with the literary Thomas Klinger for the radio drama “austernbucht und filibuster”.

It is no wonder that the work from Josef Novotny has been highly acclaimed and lauded throughout his career, from the recent honorary mention at the Prix Ars Electronica and his winning of the contest for “Tonbild 2011” for his audio-visual work with mica (music Austria).

Finally, to explain how Novotny came to create electronic music, he refers to the introduction to his dissertation and quotes himself:
It was common that my instrument wasn’t present within the improvisational ensembles which I attended, and so, to solve this problem, I was drawn to the electronic instrument, such as the synthesizer, which was my first foray into the creation and experimentation of electronic sounds. The open architecture of synthesizers such as the Korg MS-20, allowed an endless amount of control over sound parameters and their modification, and from these possibilities began a fascination with the creation of standing notes, such as those made by brass instruments. This aspect of the synthesizer is akin to the organ, as it were, and different to the function of a piano key, which allows more freedom to the length of each tonal resonance, and the Clavichord also allows for a minimal tonal change in each note resonance. In this way the synthesizer was a great challenge, not having any predecessor in the virtually infinite amount of possible tonal modulation which the instrument is capable of. The spontaneous and direct access of modulation parameters, which was always important to me, also made even more relevant the use of such electronic instruments in an improvisational environment. The resulting consequence of the electronic medium was the possibility to save and edit improvised material, and work out compositions from it at a later time. It was this tension between improvised and composed music, which has occupied me for years, and stands in close connection with the organ, which is the basis for my research, and hopes to manifest the reverence for a new type of music.

We are also sure that Novotny’s experimentation into the relationship of piano and voice will offer a fruitful output in the very foreseeable future.