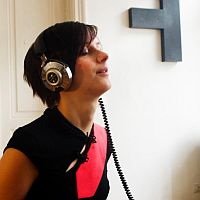 From the very begging of Ángela Tröndle’s life, it was clear that she would find her love and profession in music. As the daughter of two musically active parents (mother a cellist and the father a violinst and bratsch) the singer, pianist and composer, born in 1983, seemed to have a path predestined. In her formative years she began studies of the violin and piano, largely in a classical musical vein, but all that changed as soon as she discovered Jazz for herself. The fire was started within her, as in most successful projects is the case, has continued to burn steadily until now.

The native of Salzburg, with her glass-clear and multi-faceted voice, has since taken up in Vienna, and has delved into a plethora of musical styles and directions, which are often packaged in unusual and surprising contexts. As an artist who is, in her nature not one to constrain herself, her music is an open process with much experimentation, and she isn’t afraid to take chances and put herself into unexpected and new musical situations. This is exemplified in her playing style, which spans the entire bandwidth of Jazz, from early traditional to modern contemporary, as well as aspects of classical and chamber music.

During her studies she founded her first ensemble, Mosaik in 2005, which was the first engine that drove her into notoriety within the local Austrian music scene. Together with Tino Czihak, Stefan Heckel, Siegmar Brecher and Philipp Kopmajer, Tröndle realised a completely unique and nontraditional vision of a Jazz ensemble, which, with their 2007 debut album (“Dedication to a City”) and its success was a clear sign that she and her band were on the pulse of the time. Following the release of her debut album, was an extended tour throughout Austria and a host of internatil music festivals in Mexico, Kazakstan, Serbia, Greece, Italy, Poland, Czech Republic, and Protugal.

In 2012 Tröndle embarked on a new musical chapter in her career, with the cellist Sophie Abraham in their duo project, “The Little Band from Gingerland” and the release of the album “Time out Time”. The album encompasses a modern composing style, multi-faceted and diverse vocal style, a new play on Jazz with the simplicity of pop and the incorporation of experimental electronic music, all while staying fresh and charming in its own unifying form of “Art-Pop”.

Angela Tröndle belongs to the restless class of musician who continues to develop and drive herself into new musical positions and her curiosity pushes her towards the pursuit of ever greater challenges.