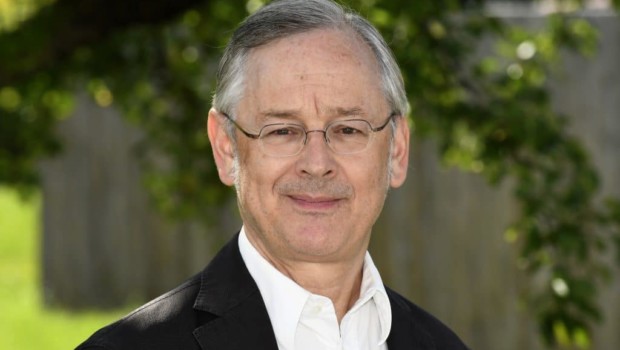 Matthias Osterwold hands over the artistic direction of the Tyrolean Festival for New Music KLANGSPUREN SCHWAZ to new hands. His successor will be the music journalist, publicist and curator Reinhard Kager, who will assume artistic responsibility for the festival, which was founded in 1994, in October 2018.

A total of 30 applications had been received by the end of April, eight of which were invited to the hearings under the chairmanship of Harald Mayr (former managing director of the Tiroler Landestheater, without voting rights). The jury with Wolfgang Praxmarer (music journalist), Sabine Reiter (Managing Director mica – music austria), Dietmar Wiesner (Ensemble Modern, Lecturer KLANGSPUREN LAUTSTARK), Angelika Schopper (Managing Director KLANGSPUREN SCHWAZ) and Matthias Osterwold decided in favour of Reinhard Kager as the new artistic director after intensive discussions with the candidates and subsequent voting.

Reinhard Kager (*1954) worked until 2002 as cultural correspondent for the F.A.Z. and numerous ARD radio stations. From 2002 to 2012 he headed the jazz editorial office of Südwestrundfunk in Baden-Baden as well as the improvisation line of the Donaueschinger Musiktage and the annual SWR NEWJazz Meeting. Since 2013 he has worked as a freelance author in Vienna for F.A.Z., ARD, ORF and other international publications. He also teaches at the universities of Graz and Vienna.
“I am very pleased,” says Reinhard Kager, “to be able to bring my international experience as a music curator into play in Austria, especially since I have been following KLANGSPUREN with great interest for 25 years. Even in the early days of this unusual festival under the direction of Thomas Larcher, I found it liberating that KLANGSPUREN did not only address the professional clientele, but first and foremost also the open-minded Tyrolean public. I too would like to go further along this challenging but extremely rewarding path of conveying contemporary music of different aesthetic directions in order to open up listening and thinking”.

excite people of all ages for new music

Angelika Schopper: “The association KLANGSPUREN SCHWAZ is very pleased to place the responsibility for the festival editions 2019-2021 in the hands of Reinhard Kager, who has got to know the 25-year-old festival in various stadiums through his many years of journalistic support and with his own experience as festival maker will seamlessly continue the work of his predecessors. The Tyrolean Festival for New Music thus begins the next quarter of a century and – under the new artistic direction of Reinhard Kager – wants to continue the intensive dialogue with its audience and excite people of all ages for new music”.

The KLANGSPUREN-Festival has been directed by Matthias Osterwold since 2013: “For me it was an extremely attractive task to be able to artistically design six editions of the Tyrolean Festival, whereby I had the honour of starting with the 20th festival edition and concluding with the 25th anniversary of KLANGSPUREN. This rounds off a chapter in the rich history of the festival. I am delighted about the appointment of Reinhard Kager, who has accompanied KLANGSPUREN for many years in an extremely knowledgeable and critical manner in music journalism and literally on many long musical pilgrimages”. Until 2014 Osterwold was artistic director of “MaerzMusik – Festival für aktuelle Musik” of the Berliner Festspiele, from 2018 to 2020 he works as music curator at the Ruhrtriennale.

For KLANGSPUREN Schwaz, 2018 is a year of anniversaries. The Tyrolean Festival for New Music is 25 years old!

Matthias Osterwold has given this year’s festival (06.09-22.09.2018) the motto FESTE.ORTE and, on the occasion of it’s 25th birthday, focuses on works and projects that address aspects of celebrations, festivals, rituals and events and have a reference to characteristic places and situations specific to the history of SOUND TRACKS.
The KLANGSPUREN SCHWAZ team would like to thank Matthias Osterwold for his constructive and friendly cooperation and looks forward to working with Reinhard Kager in the future.

A moment to remember how – always supported by the enthusiasm of the creators – a large international festival with unusual forms and locations, widely recognised in Austria and Europe, has developed from circumstances that were often improvised at the beginning. Klangspuren Schwaz is a festival that nevertheless preserves and cultivates its down-to-earth roots in the Tyrolean population and the cultural landscape, not at least through its multi-layered continuous educational projects for people of all ages.

In first row is the KLANGSPUREN INTERNATIONALE ENSEMBLE MODERN ACADEMY, which goes into its 15th year. Every year, the Academy offers nearly 40 young professional instrumentalists from all over the world the opportunity to deepen their practical skills and knowledge in the performance of new music under the guidance of master musicians of Ensemble Modern and to present them in festival concerts. Rebecca Saunders, who holds an outstanding position in her generation, is this year’s Composer in Residence for the Academy and the Festival. The Tiroler Symphonieorchester Innsbruck which traditionally performs the opening concert of KLANGSPUREN, will be 125 years old and will be honoured on September 6th with a programme appropriate to the occasion. In view of these anniversaries, the motto of the 25th edition is FESTE. LOCATIONS. The festival focuses on works that address aspects of festivities, celebrations and rituals and mark specific places and situations.