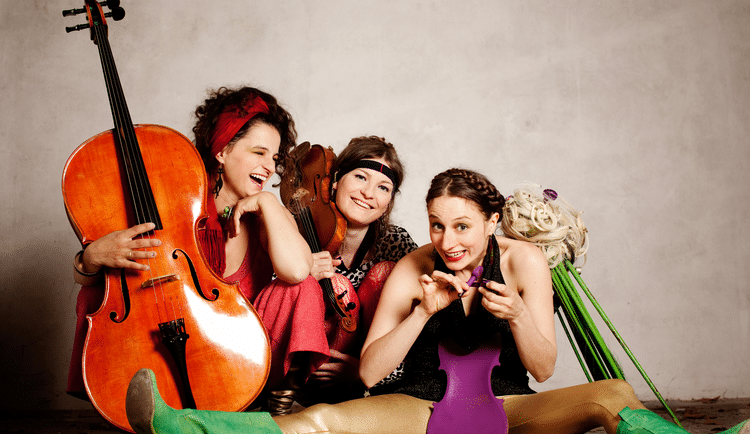 Traditional folk music in a completely new context – this is the concept of the trio Netnakisum. Reading the name of the Styrian formation from back to front spells nothing other than the word ‘musicians’ in German. And brilliant musicians they are, the three ladies Magdalena Denz, Marie-Theres Härtel and deeLinde. The aim of this extraordinary string trio is to free folk music of conventional and traditional stereotypes and give it a completely new and contemporary feel.

Netnakisum can already look back on a six-year history. Founded in 2004 by Hermann Härtel jun. (1st violin), Magdalena Zenz (2nd violin), Marie-Theres Härtel (viola) and Linde Härtel (cello), the ensemble started out as a quartet and set itself the goal to release folk music from its tight traditional corset and match it with different music and styles from around the world.

Their very open understanding of music shows no fear of contact and demonstrates the courage to take risks. The four musicians make use of the extremely rich collection of Asian sounds, as well as the repertoire of traditional songs in South America and Europe. They yodel as if there is no tomorrow, divert violins from its intended use and convert them to guitars or zithers, always depending on the requirements of their music. Stylistically, the quartet has no limits. With an impressive matter of course, Netnakisum makes excursions into other musical genres such as jazz, rock, funk or Irish folk.

Hermann Härtel, Magdalena Zenz, Marie-Theres Härtel and Linde Härtel created a completely new and very international sounding version of world music, which does not have much to do with the original folk music. After a short period of time, Netnakisum was able to succeed in finding its very own distinctive style. No matter where the string quartet appears, the audience has always been impressed and excited by the very inspiring and lively performances.

In 2006 the initial line-up changed for the first time. Hermann Härtel jun. left the group and was replaced in his position of first violin by Magdalena Zenz. Soon after, Johanna Kugler joined the ensemble on the second violin. A year later, a dream came true with their first album. Even the critics of the country were impressed with the quality of the output and enthusiastically praised their first work. Again, numerous performances followed at home and abroad, including concerts in Portugal, Switzerland, Germany and Ireland.

In the fall of 2009, the string quartet released its second album “Nutville”. Once again, the critics were excited. The four Styrian women succeeded in balancing ambition and fun in a playful way. The pieces sound more diverse than ever and reveal very high song writing qualities.

A few months later, in the beginning of 2010, the group began a complete new era. Johanna Kugler left the ensemble and the quartet became a trio. It is emphasized that it was a friendly separation.

The first album of the trio was released in April 2011 with the title “Das Geheimnis der Alpenstube”. With their fresh interpretation of traditional folk music, Netnakisum continue to rock the stage in various countries.
Michael Ternai