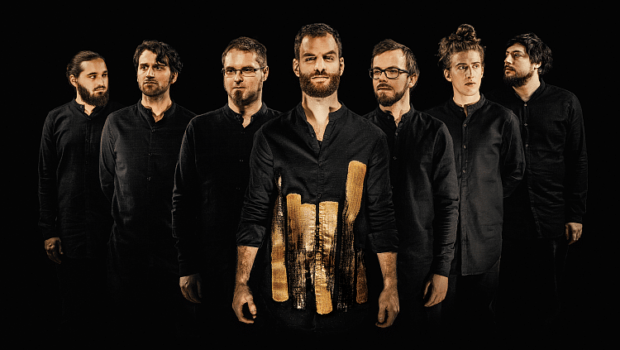 LUKAS KRANZELBINDER – one of the most active musicians in the Austrian jazz scene – has put together a real all-star band for his new project SHAKE STEW. A musical constellation that guarantees the special, the unusual, and the offbeat.  And with the upcoming release of their album “The Golden Fang” (Traumton Records) they delivered just the stunning ingeniousness one would expect from them.

The tonal palette that the septet – which opened the renowned Jazz Festival Saalfelden this year and in the coming months will be the Porgy & Bess-Stage Band – presents, reveals itself as extremely diverse. There is almost no direction they don’t eventually explore. It can just as easily be the calm, straight, groove of “Shake The Dust”, as the wonderfully touching, dreamy, and elegant “Can not Reach”. One is taken on a fascinating musical journey that finds its beginning somewhere in the mysteriously oriental and follows a winding and exciting path to the rule-less improvisation of “Stone of Mu – Part I-III”. And then it can be more traditional, just with a modern swing and sound like “Beware of the Golden Fang”.

The enormous joy that all involved in creating the “The Golden Fang” felt is almost tangible. The energy, momentum, and wit of Shake Stew are contagious. As listener it is impossible not to be captured and pulled into the exciting and varied musical narrative of the album. Lukas Kranzelbinder and his troupe have managed to put together a truly exceptional musical statement that is bound to go places.