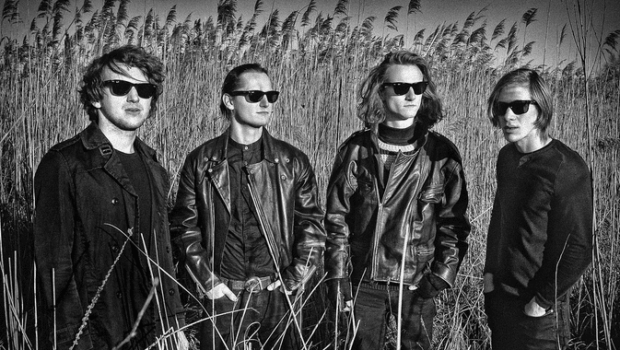 Every now and then, a young and upcoming band will go beyond being just “alright” or “good” and produce songs that stick in your head for a long time. Real uninhibited rock music is hard to find these days, but SHE AND THE JUNKIES make it easy for you. With the new release of the self-titled album, the Lower Austrian combo produces unique and infectious music that speaks to an ever growing national and international fanbase.

Ever since their debut EP in 2014, She and the Junkies have already proven that they are a force to be reckoned with. Rather than adjusting to popular sounds of polished indie rock with all of its clichés, the music of She and the Junkies is heavily impacted by rock history: a touch of seventies flair here, a bit of punk attitude there, a small detour to alternatively tinged Britpop, and then again another quick turn to more psychedelic sounds. As a whole, it all makes sense – the extremely varied tracks ignite from the very first second, with raw and edgy sounds, powerful riffs, and a driving buzz.

She and the Junkies, consisting of Andreas Grubner (vocals, bass), Dominik Boria (guitar), and the brothers Leo (drums) and Matthias (keyboard) Ihrybauer, have come a long way in only a few years. It is not only the exeptional songwriting skills that make She and the Junkies stand out from the crowd. While many other formations from the same musical corner try in vain to get the right sound and struggle to make a break-through, Andreas Grubner and his band colleagues seem as if they couldn’t care less. The four musicians approach their songs with an effortless ease, which makes their music come across as an entirely natural process. Nothing seems faked or contrived in any way. It is this authenticity that gives the sound of She and the Junkies its distinctive kick.

With the current tour through the United Kingdom and the new album, the band She and the Junkies have set a big exclamation mark that will definitely not go unnoticed.

Text: Michael Ternai (translated from German)
Photo: She and the Junkies © lemontied.com