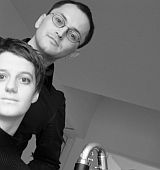 What does music sound like as we enter the twenty-first century? One answer can be found in the project ShortCuts: a unique collection of works for two clarinets or bass clarinets. This diverse array of 34 short pieces written by composers from four continents is a snapshot of the contemporary scene. ShortCuts was initiated by and created for the clarinetists Petra Stump and Heinz-Peter Linshalm.

The project was inspired by a coincidence: when Jorge Sánchez-Chiong’s bass clarinet duo trópico tránsito wasn’t finished in time for its world premiere, Petra Stump and Heinz-Peter Linshalm performed just a two-and-a-half-minute excerpt – a wild, note-for-note composition in the style of a free jazz improvisation entitled for albert ayler. The audience was ecstatic. Petra Stump and Heinz-Peter Linshalm recognized the potential of this approach: two of the same instrument, chamber music at its most intimate, a short and concise form – a challenging point of departure.

The Stump-Linshalm Duo invited composers it knew to contribute to ShortCuts, and the result was a colorful mix of roughly three-minute-long pieces written between 2008 and 2010. The compilation ranges from scrupulously detailed scores like Simeon Pironkoff’s unstable secrets, a piece that gives various playing instructions for almost every note, to Christoph Herndler’s quicksand, which is notated using graphic symbols, from Klaus Lang’s weisse schatten., which is marked by the gentle gliding along of noise and sound, to Bernhard Gander’s bejing in which the listener is confronted with energy packed into notes that almost push the bass clarinets to the top of their range. Whereas Johannes Kretz bases his Hoquetus Africa on the medieval practice of hocket, Hey Driver, Cool Down the H’s by Christof Dienz was inspired by a song by a Latvian post-punk band, and while Gerald Futscher’s piece “Ich würde vorziehen, es nicht zu tun.” requires a tub of water and tubes connected to the clarinets, the finale of Alexander Moosbrugger’s jemand sagt >bleib!< calls for the setting off of 23 confetti shooters. To cut a long story short, ShortCuts offers plenty of diversity. (Text: Ursula Strubinsky)

They have been working together as a duo interpreting classical and contemporary music since 2003. To date countless well-known composers, e.g. Chaya Czernowin, Beat Furrer, Bernhard Gander, and Klaus Lang, have written works for them. Some of these were released in 2005 on their debut CD born to be off-road on the label einklang records. The double CD was awarded the Radio Österreich 1 Pasticcio Prize. In 2006 the duo released its second CD on KAIROS, Pierluigi Billone’s full-length work for two bass clarinets 1+1=1.

Through their collaboration with Karlheinz Stockhausen the Stump-Linshalm Duo has meanwhile also developed a special interest in contemporary opera. In addition to performing, Petra Stump and Heinz-Peter Linshalm are also dedicated to teaching and hold workshops on a regular basis. In 2005 they published a workbook entitled clarinet update (Verlag Doblinger) designed to teach contemporary playing techniques to young clarinetists.