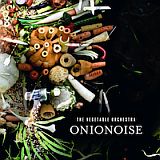 “Onionoise” by “The Vegetable Orchestra” is now the third release of this unique ensemble, which has dedicated its work to the aural exploration of vegetables. Instead of guitars, violins and other instruments, this orchestra uses carrots, artichokes, leeks, pumpkins, onions and other vegetables. Think that doesn’t work? The Vegetable Orchestra will prove you wrong and show that music can be made with everything at a very high level. The album “Onionoise” will be released on the 3rd of December and presented on the 13th of December in the Viennese Radiokulturhaus.

In filigree work, the members spend a lot of time developing their instruments and constructing ludicrous equipment such as a leek violin, a carrot flute, a cucumbophon, a pumpkin timpani and more. The possibilities seem to be limitless. Surprisingly, the sounds of these vegetables are enormously complex: piercing, loud, quiet, dark, soft, crackling … though it is a real pity that these instruments are quite evanescent. In most cases, they start to wither after one concert or studio session.

The Vegetable Orchestra – Scoville by mica

Founded in 1998 in Vienna, The Vegetable Orchestra has no musical limits, the compositions are tailored to the specific tonal characteristics of the vegetable instruments. The compositions include elements from various music genres such as minimal techno, free jazz, dub, electronis, ambient, noise, pop, contemporary and electro-acoustic music, which are merged into a multi-layered and groovy whole.

The opening track, “Scoville” passes off as a top notch techno song, which would work in any dance club. In turn, “Nightshades” is very hypnotic and atmospheric, whereas “Pocket Stampede” comes around as an experimental electro-acoustic piece. South American flair is spread with the track “Brazil”. And it goes on and on ….

“Onionoise” is an outstanding piece of music, not only because of the unusual instruments. The whole album is also very fascinating from a compositional standpoint. Overall, the very complex numbers are very exciting to listen to and every new listening experience consistently reveals new mysteries and secrets.